Cycling round the world to save the world

Mohammad leaving Multan and saying goodbye to his host Bashir 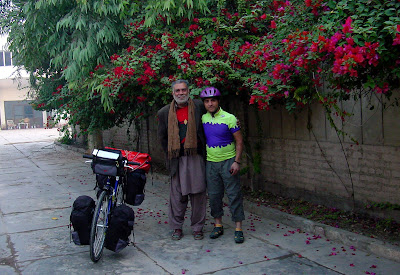 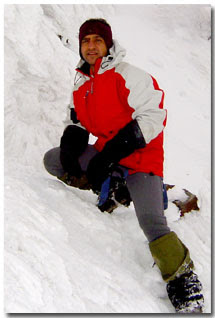 Caption: Mohammad and his Mother on the day he left Meshad.

Every day in Jakarta is different for me. About 11 am a strong handsome guy walked quietly into the office asking for help. He had cycled from Tehran to Jakarta taking 120 days and covering 12148 km. He was having problems getting a visa to Australia and New Zealand. He had a letter from the International Committee of the Red Cross in Tehran and others verifying he was a member of the iranian Red Crescent Rescue team. Naturally I was happy to help Mohammad. What a feat. So I wrote him letters to both the Embassies asking to help a man with a mission to plant trees and publicise climate change.

Why is Mohammad cycling round the world ? Let him tell his story in his writings.

Our beautiful planet” earth ” , which is moving on the boundless space .
is the only planet that we know of with one which there is life in it and many different living creatures ,that they all need oxygen , water and food to live there .
To find some signs of life in the other planets such as Mars and Venus , the scientists have done a lot of investigations , but they all have been disappointed . The high temperature in Venus which is 445C and the low temperature in which is - 45C Mars makes it impossible to live there .
How ever , it is 12C on the earth . storage of Oxygen in other planets is another vital reason for lack of life there . But there is a nine layer combination of different gases around Earth which includes %21 of Oxygen and just %0.02 of Carbon dioxide . The amount of Oxygen and Carbon depends on the amount of trees and plants , so if they become extinct changes in temperature o pollution , then the blue pearl of space ( a nick name for the Earth which is called by the scientists ) will change into a lifeless planet with a temperature between -264C to +360C .
The harmful effects of pollution on the Ozone layer is absolutely tragic because it will destroy the jungles and pastures So we should do our best to help the environment .
Now we are going to move and go around the world and give our message to you , all of you and all people of the world without considering their race , religion or nationality .
We are going to ask all the people of the world to keep the “ world to care for and plant tree ” , because our life depends on the life of the trees .
To put it in action , we have decided to get in touch with NGO groups . then with their the cooperation , we are going to plant a tree in each city we get there to remind all of us of keeping trees as a symbol of Gods blessing . To achieve this goal , the supporting team will help us by getting contact with NGOs and they will inform them of our presence and our trip .
The cooperation of NGOs with us will help to achieve our goal .

1992 The beginning of sports activity in bicycling for 10 years.
2002 The beginning of mount climbing for 3 years.
Climbing to some 4000 meter mountains.
Climbing to the top of Mountain Damavand with about 5671 meters high.
A member of Azadegan Mountain Club.
Being active in Tourist Bicycling for 8 years.
Having Batchelor Degree in mechanics.
Tourist cycling guide in Iran .
Single.
Interested in mount climbing , caving , Tourist cycling and photography.
mail : malan1445@yahoo.com

Email ThisBlogThis!Share to TwitterShare to FacebookShare to Pinterest
Labels: Iranian cyclist going round the world

Would love to see him touch base in Barbados. Will he accept this invitation? Good luck in your adventure.

Thanks Pazterika. I will pass on the invitation to Mohammad. Best wishes.