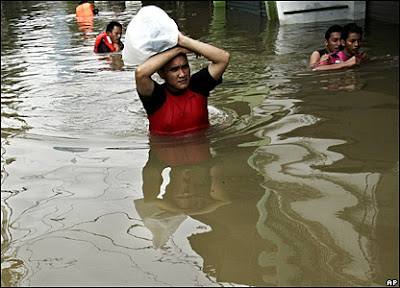 There has been heavy rain in Jakarta and other parts of Java this weekThis morning I was woken by a text message from the Indonesian Red reporting that floods triggered by heavy rain killed eight people in two districts in East Java over the past two days.

Four people died on Saturday when an electricity pole was toppled by storms, hitting a car in which they were travelling in Bekasi, east of the capital Jakarta, he said.

The Indonesian Red Cross (PMI) has swung into action supporting the affected people.


Several areas in Jakarta, where flooding killed five people this month, were under water today, Subday, but there were no immediate reports of casualties.

Rain and floods forced about 100,000 Jakarta residents from their homes early this month and brought the city to a standstill.

Last year floods hit our house in Jakarta and we were without water and electricity for 8 days
Posted by Bob McKerrow - Wayfarer at 22:11

Email ThisBlogThis!Share to TwitterShare to FacebookShare to Pinterest
Labels: Floods in Indonesia