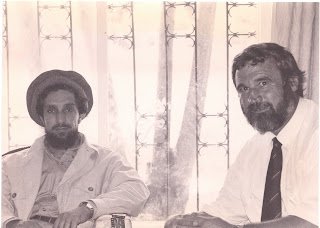 I lived in Afghanistan for almost four years. First in 1976 and again from 1993 to late 1996. After explaining in detail the book I was writing at the time called the Mountains of our Mind - Afghanistan, I asked Commander Massoud if he would answer some questions which would assist me with my book. He gladly agreed. Here are extracts from the interview. The book is available at http://www.indiaresearchpress.com/

Where did get your knowledge of using the mountains as a place to fight the Soviets from ?

You frequently crossed passes in winter. Did you see people die of exposure, avalanches etc ?
I saw many peple die of cold, exhaustion and avalanches. Frostbite was common.

Did you use the mountains as a weapon, a friend or what ?

The mountains are the best base to fight from. They are both a stronghold and a shelter. It is the best terrain for Guerilla fighting.

I have noticed that when I travel in the mountains most of the people are uneducated and most know little or can quote little from the Koran, but can quote from memory for hours or days the poems written by the Afghan/Persian poets who were clearly Sufic influenced . Do you think I am right ?
You have discovered something unique there, (laughter) you are probably right.

In most cultures people worship mountains, such as the annual Nauroz festival in Mazar which worships the snow. What feeling do you get when you look at the mountains ?

Mountains remind me of the past. When I see the mountains I have love in my heart. When I am in Kabul I feel surrounded and bored. But when I see the Hindu Kush a new horizon opens up.

If you could choose to live anywhere in Afghanistan, where would it be ?


When Ahmed Shah Durrani was living an Delhi he wrote a very moving poem about missing the mountains of Afghanistan. When you travel do you miss the mountains ?

Yes, I have the same feeling as Ahmed Shah Durrani expressed in his poem.


There is a saying in Latin, Montana Semperi Libre, Mountaineers are always free. Perhaps it could equally be applied to Afghanistan ?
I like that expression. We have a saying in Dari that if there is a dispute in the city between Afghans, the weaker is killed. If one is in the mountains no one can catch him.

Let me tell you a story said Masoud. One of my body guards, Miraj, was a tough man of the mountains. He died in Takhar during a major offensive. Sandy Gall filmed him die. The film was called Agony of a Nation. Well Miraj used to walk from the Panjchir, over a pass to Nejrab, buy a 70 kg bag of wheat and walk back home over the mountains with it on his back. This was more than a 20 hour journey and he never stopped to rest. I doubt is a professional mountaineers is able to walk on the mountains like we do because we know them so well. Often, Afghan mountaineers wake up in the middle of the night and walk over the mountains


During my writing I have discovered that Afghanistan has had three great mountain men. The first was Alexander the Great, the Babur, who wrote a chapter in his book Babur Nama on the mountains of Afghanistan, and yourself. What is your view ?


One of the great factors for a leader is how to use the mountains as a strong hold, as a shelter. During the war against the Soviets we needed to capture the Hindu Kush from the Pamirs to the Kohi Baba and all the mountains north and south of the range. The mountains were useful, we needed to know them well.

Before you leave, I want to thank you. The Red Cross, led by you, has done great work for the people of Afghanistan. When the UN closed its offices during the heavy fighting in Kabul, the Red Cross stayed here. I tell people of the UN you should have stayed here like the Red Cross.

Our allies admired the country when we fought against the Soviets but the same countries give us negative publicity.


Thank you for writing your book on Afghanistan. I urge you to translate in into Dari.
Posted by Bob McKerrow - Wayfarer at 16:34

God bless Amer Saheb Massoud! From God we come to Him we return.

Ahmad Shah Massoud,
a man who fought for what is right and just and died for it. may God bless him.

For Vote to Martyrs Page in Facebook use the below Link.