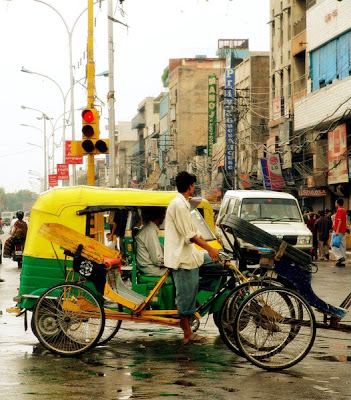 
My prime of youth is but a frost of cares,
My feast of joy is but a dish of pain,
My crop of corn is but a field of tares,
And all my good is but vain hope of gain,
The day is past, and yet I saw no sun,
And now I live, and now my life is done,

My tale was heard and yet is was not told,
My fruit is fallen but yet my leave are green,
My youth is spent but I am not old,
I saw the world and yet I was not seen
My thread is cut and yet it is not spun, And now I live, and now my life is done,

I sought my death and found it in my womb
I looked for life and saw it was a shade
I trod the earth and knew it was my tomb,
And now I die, and now I was but made;
My glass is full, and now my glass is run,
And now I live, and my life is done.


Woke up to a cool, quiet New Delhi morning. The flights from Jakarta to Singapore and then Singapore to New Delhi were uneventful, except for the great movie I saw Elizabeth: The Golden Age. Cate Blanchett played the role of Elizabeth magnificently and the film was full of pageantry and intrigue. The movie was brilliantly directed by that great India film maker Shekhar Kapur

I thought of Chidiock Tichborne who was executed in 1586, after pleading guilty to assassinate Queen Elizabeth and put Queen Mary of Scots on the throne, His poem on one man's brief life has long outlived his noble crime. The poem written above, he wrote in the Tower of London before they lopped his head off.

Last night as I slept, dreams and memories started drifting back of the hardest days of my entire life working here after the massive earthquake that occurred in Bhuj, Gujarat State.

I wrote this on

6 March 2001: The last 35 days have been the toughest of my life. More difficult than the North Pole expedition of 86, tougher than any mountain I've climbed. The first 5 days I had no sleep and since then for the last 30 days I've survived with a handful of hours every night. God knows how I've kept it up. Finally I am having this weekend off after having spent the last 14 days in Bhuj and Bachau. The dust, the dirt and stench of decomposing bodies permeates every pore of your body. People speak of a death toll of over 100,000 now which I can readily believe.

Running and coordinating a team of over 150 foreign delegates, supervising a 350 bed hospital plus two other field hospitals, getting vital relief goods out to over a million of the worst affected people, organising pycho-social counselling teams, orthoppaedic centres for those 2000 or more children who lost limbs has been a momentous challenge. We now have a team of highly trained professionals from 21 countries working together with the Indian Red Cross.

Phil Goff, our Minister of Foreign Affairs arrived last night and is travelling today with the NZ High Commissioner and a top level mission from NZ, from Delhi to Bhuj on our plane (which we have chartered for the first 3 months) to see our operation. As I desperately need some time to myself I have sent my deputy, Alan Bradbury, another NZ'er with them to show them round. I have dinner with them when they get back

So the dreams and memories of the ten years or more I have lived in India have been reawakened by my return to this land full of wonders, miracles and curiosities. I am staying with my good friend Nina, who I have worked with in Central Asia and India..

She told me of a dream she had recently where the Dalai Lama spoke to her and was teaching about the impermanent nature of everything-even the work we do. He was emphasizing it is only a tool of our own development.

The name on my blog title is wayfarer and it aptly describes who I am. My journey has been a long one and I have had my share of experiences along the path of impermanence. I have been given freedom and choices and I am the tool of my own development.

It is 9 a.m. and the sun is warming the path. It is time to go and explore New Delhi before leaving for the throne of the Dalai Lama tomorrow, situated on that hill at Macleodganj.
Posted by Bob McKerrow - Wayfarer at 00:06