To Dalhousie and Chamba valley. 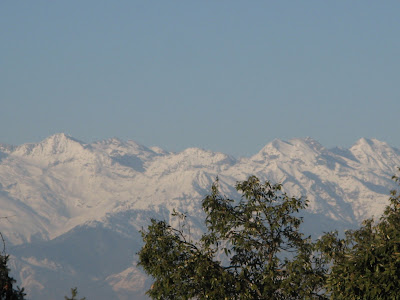 The magnificent Pir Panjal range as seen from Dalhousie. 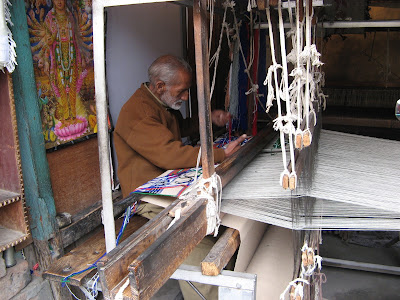 Master weaver in Chamba. I bought two beautiul shawls from him. 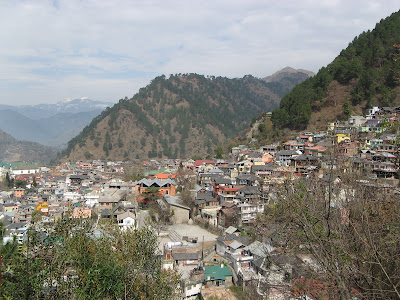 Chamba township in the Chamba valley 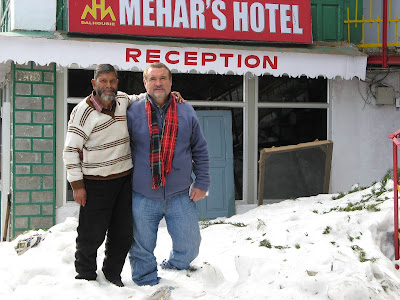 Anil (l), the manager of the Hotel in Dalhousie, and me right. Anil is a mountaineer and trekking guide. 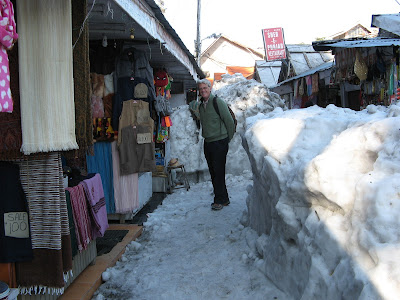 Ari walking through the snow in Gandhi mall, Dalhousie 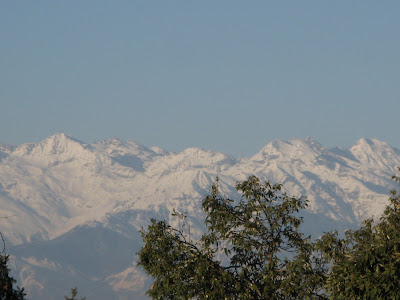 The Pir Panjal range from Dalhousie. 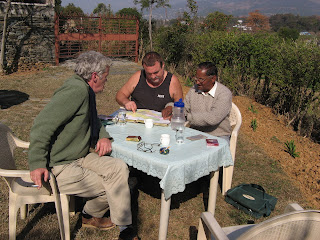 Ari (l), Rikhy Ram (r) and me in the middle, planning our trip to Chamba valley.

Snow, rivers, lakes, spectacular mountains, freezing cold and cheap bus trips have been the main elements of my journey during the past few days.

We returned from Dalhousie and the Chamba Valley late last night to Sidhbari where we have our base.. The cold spell continues throughout Kashmir and Himachal Pradesh. It was -9 oC in Phalagahat on 20 February. We arrived in Dalhousie on 20 February after a one and a half hour drive from Sidhbari then a 4 hour bus trip from Chakki in the Punjab. The trip cost 40 Rupees (1 US$) from Chakki to Banikhet and then 5 rupees (approc US 10 cents) from Banikhet to Dalhousie. Heavy snow lay everywhere around Dalhousie as the road had only been opened two days earlier after a heavy snowfall a week early, two metres deep. Most of the hotels were closed for winter but we found one called Mehar’s. I stayed in the room that Subar Chader Bose slept in 1937. His photo proudly adorns the wall. He led the Indian Nationalist Army in the second world war in support of Japan and Germany against the British.

I am travelling with Ari a really fine Dutchman who lives in Delhi. He has the honourable profession of house husband.

I selected Dalhousie for the first night as I had yet to see the Western end of the mighty Pir Panjal range (part of the Himalaya mountain system). Dalhousie at 2115 metres affords superb views and is a spectacular entry point to the remote Chamba valley. After a night freezing in Dalhousie, we got a local taxi van and wound our down narrow roads 100o metres of pine forests and beautifully terraced wheat fields to the Ravi River which flows through the the Chamba valley. To the north of the Chamba valley the Pir Panjal tower over the valley, and to the south, the Dhaula Dhar range. At Chamba town it feels narrow, and the mountains hem you in. I visited an old man who weaves beautiful shawls for men and women and bought two,
Chamba at 996 metres is the district headquarters. The main attractions are the Bhuri Singh museum, Laxminarayan temple, Rang Mahal and Chamunda Devi temple.

For me, I have now visited the main valleys of Himachal Pradesh, The Kullu, Spiti, Lahaul, Kangra, and now the Chamba. Tomorrow we are heading from the Kangra valley, into the Kullu and then the beautiful Parvati valley....
Posted by Bob McKerrow - Wayfarer at 21:57

Email ThisBlogThis!Share to TwitterShare to FacebookShare to Pinterest
Labels: To the Pir Pamjal mountains

The northern part of India and Pakistan is simply gorgeous...Have u ever been to Pakistan?

Yes, I spent many years in Afghanistan and Northern Pakistan and travelled from Chitral to Gilgit, up the Swat Valley and many other high valleys. Thanks for your comments.

With the move of the canal away from Port Dalhousie the major ship suppliers like Latcham’s and Scott’s continued to supply food and other supplies.

This is really right a great stuff for sharing. I appreciate your efforts.
To solve any kinds of problems regarding to Webroot antivirus you can contact us through toll free number 1-877-301-0214.Webroot helpline number Webroot tech support phone number Webroot help desk number.Problems you can face while using Webroot antivirus:
Slow down Pc performance
Installation problems
Firewall problems etc

Thanks for the nice blog. It was very useful for me. Keep sharing such ideas in the future as well. Best Hotels in Dharamshala

I’ve been looking for info on this topic for a while. I’m happy this one is so great. Keep up the excellent work.
Hotels in Dalhousie
Dalhousie Hotels

Happy to see your blog as it is just what I’ve looking for. I am looking forward to another great blog from you. Hotel in Mastura