High peaks in the Himalaya from the Parvati valley, Himachal Pradesh, India 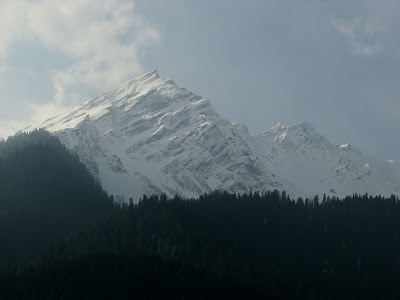 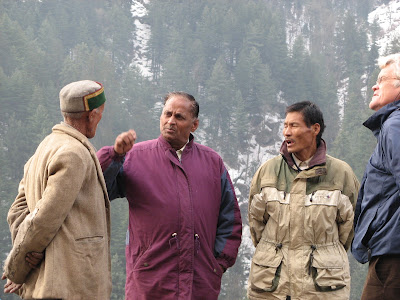 Kullu valley before Bhuntar with the Beas river flowing through. 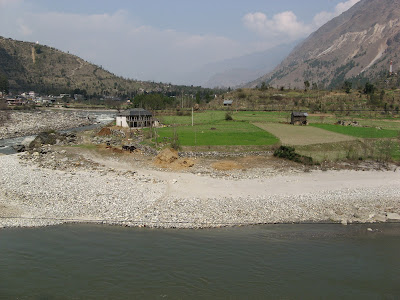 Boy and gil at Mandi with baby lambs and goat 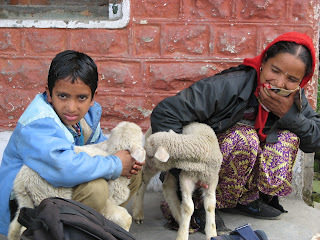 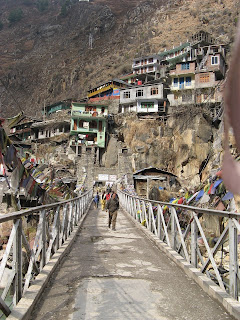 Caption:Crossing the bridge to the old part of Manikaran, Parvarti Valley

From the feet of the Dhaula Dar and Pir Panjal mountains in the past 10 days, yesterday I stood at the foot of the Greater Himalayan Range from the eastern end of the Pavati valley..

The Dhaula Dar and Pir Panjal are the two lower Himalayan Ranges that make up the western part of the Greater Himalaya.

On Saturday and Sunday (23 and 24 Feb) I visited the Parvati valley and walked up to almost 3000 metres from the roadside village of Pulga, I have now been able to visit all the main valleys in Himachal Prade since 2003: Spiti, Lahaul, Chamba, Kanga and Kullu. It was a real privilege to be accompanied by Rikhy Ram, a 72 year old ex-army intelligence officer who knows the mountains of Himachal Pradesh better than most and has walked over most passes and up and down all the valleys, except Parvati. So to have his company was a real treat, Rikhy speaks all the local languages and helps me piece together the history, people’s impressions and as an artist, photographer and cartographer, is invaluable to unlock many of the geographic mysteries that remain on the por quality maps of the region.

We stayed Saturday night in an hotel at Manikarran, which is the ugliest town I have ever visited in the entire Himalaya. I am not one given to complaining, but it epitomises the worst in India’s lack of city planning. The only thing going for it was that we could buy two bottles of Red wine in one of the shops.

Clearly the highlight was the morning we spent around Pulga village and to mix with hill people and migrant workers from Nepal. Rikhy takes copious notes from his conversations and within a few hours, hasput together a potpourri of stories, facts, names of mountains and the like.

Snow was down to the river side and people were huddled together in shawls trying to catch patches of watery sunshine..

We got back late last night to Sidhbari just 20 minutes from Dharamsala. Today I plan to visit Dharamsala and Macleodganj with Rikhy. I have been there a number of times before but Rikhy wants to show me some new places I have not seen.

Tomorrow I am planning to go to Dehra Dun and ;possibly Mussorie via Chandigarh. The
Posted by Bob McKerrow - Wayfarer at 22:08

it looks and sounds like a stellar adventure - one with wings! I am envious and can't wait until you come back to Jakarta so I can see all your photos.

I am not in a position to see this web site properly on my phone :
(

my web-site; Having Trouble Getting pregnant

Nice Blog! Something what i was searching for, eagerly looking for next one from you?
Hotels in Dalhousie
Dalhousie Hotels

I am really happy with your blog because your article is very unique and powerful for new readers.