Balkh, a once splendid city

My last post was about Rab'ia of Balkh, a very courageous poetess. Balkh is one of the most splendid and famous cities in the ancient world. This week I want to discuss Balkh which is situated in northern Afghanistan. One of the oldest towns in the world, the city is also known as the birthplace of Prophet Zoroaster. The city later on gained wealth and fame as Bactria. Balkh is also known as the home of Rabia Balkhi, the first woman poet of Islamic period. Mauwlana Jalal-ud-din Balkhi (Rumi), the most distinguished Sufi poet of Afghanistan was also born in Balkh. City was also an important trade route in the ancient times. Location of Balkh is in northern Afghanistan , close to Mazar-i-Sharif. 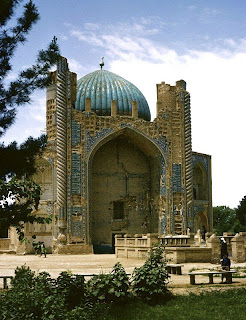 The blue mosque in Balkh


History
Arabs arrived in the city during 8th century and marked it as an important trade center. Alexander the Great founded a Greek colony here and later the city was known as Bactra. During the whole period of Alexander the Great, the region was acclaimed for its great wealth and glory. In the early centuries the city was also renowned for its Buddhist monasteries and stupas. Later it attained great importance as the center of Islam. During the rule of the amanid Dynasty about 40 Friday mosques stood within the city. Balkh's glorious history ceased in 1220 A.D. when Genghis Khan invaded the city and and left it with ruins.

In 1850, Balkh became part of the unified kingdom of Afghanistan. The new city is now agricultural and commercial center of the city. Most of the part of the city is now in ruins. I will write further in the next few days.
Posted by Bob McKerrow - Wayfarer at 19:25