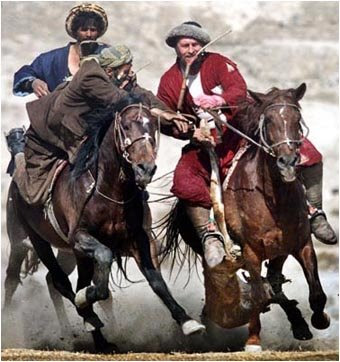 Nowruz marks the first day of spring and the beginning of the Iranian year as well as the beginning of the Bahá'í year.[1] It is celebrated on the day of the astronomical vernal equinox (start of spring in northern hemisphere), which usually occurs on the March 21st or the previous/following day depending on where it is observed.

Along with other customs and celebrations, normally a Buzkashi tournament is held. The Buzkashi matches take place in northern cities of Afghanistan and in Kabul.
In Mazar I Sharif they play Buskashi for the week following Nowroz

So happy Nowruz. The reason it is so important to me is that my birthday, 21 husually coincides with Nowruz. This celebration has certainly brought fertility to my life as I am the proud Father of seven wonderful children.
Posted by Bob McKerrow - Wayfarer at 17:42

Email ThisBlogThis!Share to TwitterShare to FacebookShare to Pinterest
Labels: Nowruz

This article is most informative. Thank you for sharing it.