Mt Tangkubanperahu for a birthday present 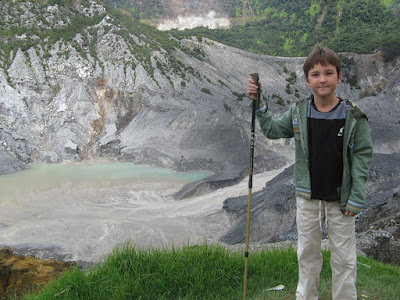 Ablai on his first climb at 8 years. The crater lake of Mt.Tangkubanperahu in the background

A week ago, Naila asked me "what do you want for your birthday ?" Thinking carefully, I responded, " a volcano, or at least to climb one on my birthday."

With my 8 year old son Ablai and my good North Korean friend Choe, the dream came true yesterday. Whew! what a slog. It doesn't get any easier as your birthdays fly by. But the joy of taking Ablai on his first climb, 3 hours from the crater rim to the highest point and back again, was a birthday present to remember forever. Also my colleague and friend Choe, who just arrived in Indonesia 3 weeks ago, was thrilled to climb a volcano and get out of Jakarta for the first time.

Mt. Tangkubanperahu erupted thousands of years ago damming the Citarum River and causing a vast lake. Two millenia ago, an earthquake opened crack in the side of the Lake and appeared in the Lake and drained leaving behind fertile alluvial deposits and and swampy ponds that have since been filled in.

This morning Ablai awoke and came running into the room, and said " Dad, look at the volcanoe we climbed yesterday." Sure enought there were the two main grouping of volcanoes on the horizon that you can see from Jakarta on a fine morning. Mt. Tangkubanperahu to the South East and Mt. Gede and Pangrano to the South West. For Ablai and I the view from our apartment has taken on more meaning and now we are thinking about climbing Mt. Gede and Pangrano, longer overnight climbs and more serious. Hopefully I will get two knee replacement soon so I can throw away the Voltaren and climb with speed and ease again like the old days.

The crater Lake and Mt Tangkubanperahu behind 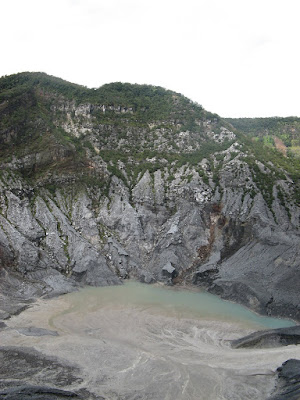 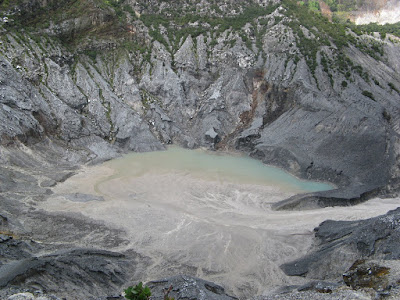 Happy Birthday!
What a wonderful birthday you had!
This mountain is near the city of Jakarta?
It is really nice. Your son will become like you?!
Anyway, happy birthday!
Wish you all the best.

Kia ora Bob,
Happy belated birthday. Looks like a great climb and day and your son will always remember it as well. That Leki pole he is holding sure looks familiar! I wouldn't go anywhere in the hills without them. Kia ora Bob.
Ka kite ano,
Robb