Unquestionably the best captain New Zealand has had. Another Ed. Hillary ? 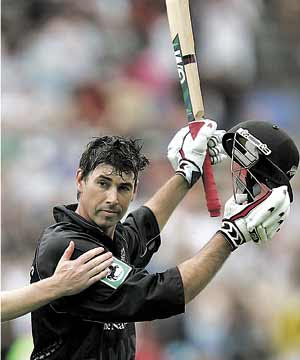 Sir Edmund Hillary died earlier this year and one cannot wonder, will New Zealand have another personailty and character of his stature ? Possibly not. But the man who I have been watching for years is Stephen Fleming. Unquestionably New Zealand greatest cricket Captain. After a rather indifferent start to his career, Australian Steve Rixon, who took over coaching the Black Caps in 1996, saw leadership qualities in him. And for 12 years New Zealand have seen this shy Cantabrian emerge as a great leader. Hillary was of a similar age, when he shot into the limelight after climbing Everest. At times a ruthless leader as people like Ed Cotter and Phillip Houghton will tell you, as they sometimes clashed with his ruthlessness. And in the following 20 years after Everest, he grew into a leader of men.
Fleming has the same ruthless streak as Hillary and proven leadership qualities and although he will cash in on his reputation in the business endorsement world, as did Hillary, let's hope he uses his skilful leadership experiences for the political, sporting or perhaps humanitarian betterment of New Zealand and the wider world. As my new guru Bill Nicol says, " Leadership is the exercise of personal initiative." Fleming is a highly creative person who lacks no personal initiative. The quote I like is "Fleming had become forthright in his answers and did not tolerate fools." These are hallmarks of leader, combined with empathy and good listening skills.


For a look at his career I borrow heavily from ysterday's Christchurch Press:

Stephen Fleming salutes after scoring 106 off 57 balls during the tsunami fundraising match in 2005. But how will New Zealand's team manage without the best captain it's ever had?

His final press conference over, Stephen Fleming leaves the McLean Park building only to be overwhelmed in a rapturous bear hug by one of the tea ladies at Napier.


"We'll miss you," she gushes as Fleming exits after his final innings of 66 for New Zealand earlier this week in an ultimately lost cause against England.

Yes, we are missing him already. Unquestionably the best captain New Zealand has had, one of its leading batsmen and probably its finest slips fielder.

Fleming's departure from the test ranks leaves a massive void, with the guessing games rife over who could take over the pivotal No. 3 position in the team.

The side has still yet to recover from the loss of opening-batting anchor Mark Richardson several seasons ago and Fleming's absence will be of a similar magnitude.

It is debatable whether Fleming, 35 this Tuesday, has gone too soon judging by the way he was consistently the best New Zealand batsman on show during the series.

His mind made up, he even opted out of an expected swansong visit to England for the second leg of the series, choosing to be with pregnant wife Kelly, who is due in June, and their young daughter Tayla.

Fleming spent his 14 years playing for New Zealand growing up under the public gaze.

It bore down harshly on him when he was one of the three New Zealand players who owned up to smoking a joint on just his second overseas tour to South Africa in 1994-95.

In many ways, the younger players who did fess up -- Fleming, Dion Nash and Matthew Hart -- and incurred a three-match suspension, gained greater respect for acknowledging their "crime" when other more senior players did not.

Fleming never captained Canterbury, where he began his career in the early 1990s, as Lee Germon was well ensconced in that role.

When Germon was deposed from the Black Caps mid-way through the 1996-97 season, Fleming was catapulted into the captaincy against England at a mere 23 years 319 days -- one of the youngest cricket captains in the world.

It has always been a moot point whether Fleming's growth as a batsman was stunted by having the leadership bestowed upon him. I believe that it was a burden he could have done without at that time.

Fleming grew into the role gradually, with the staunch support of Black Caps management, former secondary-school headmaster John Graham and Rixon, who helped harden him up. His photogenic looks helped him appeal to the younger generation and when the Graham-Rixon era ended, Fleming held the reins at the head of the team.

Some outstanding results were achieved: the Black Caps making the semi-finals of the World Cup in 1999 in England; and following that by beating England for just the second time in a test series on their home soil 2-1. New Zealand then won its first major overseas one-day Champions Trophy tournament in Kenya in 2000.

Yet Fleming also had to endure trenchant criticism when the team performed poorly. A New Zealand Herald editorial called for his sacking when New Zealand lost a home one-day series against lowly ranked, but at the time highly capable, Zimbabwe in 2001.

Fleming weathered the storms, often leading an injury-stricken side, lacking the depth of most countries, on the international stage.

He fronted up time and again to the media, gritting his teeth to repeated questioning about the Black Caps shortcomings. By this time Fleming had become forthright in his answers and did not tolerate fools.

Should Fleming get wind of what he believed was an unfairly balanced article, the correspondent would be rebuked with a sharp aside, at times in a public forum. Fleming often described the media as his hardest opponent.

I recall incurring Fleming's wrath on one occasion -- not unreasonably -- for an article. The cryptic post-conference comment of "you won't get any Christmas presents out of that" was directed straight at me.

Fleming was often in conflict with Auckland cricket writer Richard Boock, who castigated him for what he believed was effectively match-fixing a game in the 2001 tri-series in Australia with South Africa and New Zealand.

Fleming manipulated a go-slow by his batsmen against South Africa, excluding Australia from the final series -- which was a rare occasion. Fleming claimed he did nothing that was not within the rules of the competition.

Such tactics showed Fleming had developed a ruthless streak, also evident in specific field placements for certain batsmen -- such as having two fielders almost holding hands at point as a ploy to unsettle and dismiss Australian batsman Damien Martyn.

Fleming's toughness came through in the players' strike for better pay and conditions in 2002 against New Zealand Cricket. It is understood he was staunchly in the players' camp, which rankled with NZC given his lengthy leadership tenure and captain's allowance.

Being completely comfortable with the captaincy and having the trust of his team helped Fleming begin to achieve more as a batsman.

The test conversion rate of 50s to 100s, which at one stage stood at two tons and 31 half centuries -- the worst in world cricket -- began to rise. He ended on a 16 per cent conversion rate.

Fleming arguably played his most impressive test innings when scoring an unbeaten 274 in the strength-sapping heat and humidity of Colombo in 2003, with Sri Lankan spin-ball wizard Muttiah Muralitharan probing him hour after hour.

That came just after a spectacular unbeaten 134 against South Africa, probably his finest one-day innings, eliminating the home side at the 2003 World Cup in the republic.

Only Geoff Howarth and Jeremy Coney came close to matching Fleming's captaincy skills and they had the luxury of world-class players Richard Hadlee and Martin Crowe in their ranks during the 1980s.

Fleming often had to make do with moulding lesser mortals together, something for which he seemed to have a sixth sense. An intuitive fielding placement here, an inspirational bowling change there.

He finished a statesmanlike leader, highly respected, whose opinion was sought.

A rare chink in his composure came when he struggled to contain his hurt after having the prized test captaincy taken from him last year by the national selection panel after stepping down from the one-day leadership following the World Cup.

That rankled, but he decided to stick with the establishment and focus on a few goals he still wanted to achieve, like lifting his test average above 40, the benchmark of a quality batsman. It was appropriate that he did this in his final innings.

However, it wasn't all cricket and Fleming had other sporting interests, finding golf, where he is similarly adept with stick and ball, a good release of pressure. He has dabbled in horse ownership, including running a well-performed galloper, Dimondsontheinside. He also developed a fondness for quality red wines.

Fleming entered the commercial world and endorsed the merits of a deodorant and a brand of heat pump, and has done well for himself financially. He now lives in the affluent Wellington suburb, Khandallah.

From modest beginnings in Sydenham and being raised in a single-parent family, by his mum, Pauline, Fleming never had the trappings of privileged life as he worked his way to the top.

Pauline Fleming ensured Stephen never went without, being the whites-washer and providing transport in those formative years at Waltham Primary and Cashmere High School. There Fleming came into contact with Bob Carter, now assistant coach with the Black Caps, who steered him toward the Sydenham club where he started club cricket.

A gangly Fleming was pitched into the Canterbury ranks as a 17 year old in 1991-92, the youngest of a group of talented tyros such as Chris Cairns, Chris Harris and Nathan Astle, who all carved out careers for New Zealand.

Then provincial coach David Trist remembers saying to Crowe, who, at that time, was one of the world's premier batsmen: "Watch out, here's the heir apparent."

"He looked at me sideways, as if to say who could fill my shoes, but Crowe soon came to regard Fleming as something special.

"He had great natural ability wrapped up in a languid style. He also had an even mental state and a steady resolve," recalls Trist.

Fleming now moves straight into the burgeoning sports-business arena and with cricket a growth industry, courtesy of the success of the Twenty20 game, he has plenty of contacts to ensure he will be just as successful off the field.
Posted by Bob McKerrow - Wayfarer at 14:33

I could not resist commenting. Well written!

Stop by my web-site ... gardening tips

Does your blog have a contact page? I’m having trouble locating it but, I’d like to
shoot you an email.

Have a look at my weblog: what does going green mean

A motivating ԁiscusѕіon is woгth commеnt.
I dо think that you need tо write more about this toρic, іt may not
bе a taboo subject but usuallу
pеople don't discuss such issues. To the next! Kind regards!!

My web-site :: losing weight after 50

Thіs blοg was... how dо you
saу it? Relevаnt!! Finally I've found something which helped me. Thanks!

Review my site what does going green mean

You've made some good points there. I checked on the internet for additional information about the issue and found most individuals will go along with your views on this site.