Only a great president could cope with all this 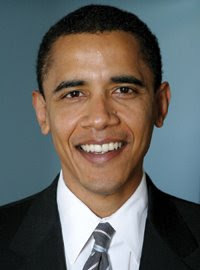 There was the euphoria of Barack Obama's stunning victory twelve days ago, and the depressing result of our elections last Saturday with a frightening bunch of right-wing politicians set to govern the country. If you look at their individual track records of racist slurs, anti resource management act comments and lack of understanding of climate change just to quote a few,it concerns me greatly. I have been reading Robb's and Pete's blogs and comments and feel we have to look beyond our shores for the hope, moral and bold leadership that Obama is likely to bring. A man, who as a boy walked the streets of Jakarta amongst the poor, will not forget the damage money hungry people people like Keys, Dunne and Douglas have done. His roots are from Africa and he will not turn his back on the damage wrought be centuries of colonial exploitaion, such as slavery and genocide. I have been searching for the complete story on the challenges Obama faces. This was published in The Times overnight and is the best I have read to date. Thanks to Gerard Baker for his astute analysis.

Only a great president could cope with all this

From the financial crisis to Camp David sleepovers, Barack Obama's early decisions are bound to break some heartsGerard Baker
What do we do now?” asks Robert Redford, at the end of The Candidate, after his morally corrosive election campaign has left him successful but devoid of principles or agenda.

There's no chance Barack Obama will find himself asking his advisers this question in the next few weeks. Seldom in the past 50 years can there have been a presidential transition freighted with the sort of policy challenges this one carries. 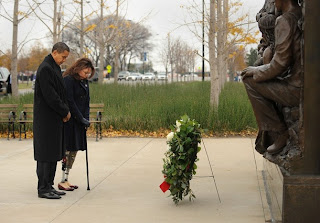 Candidates generally run for office on one list of issues and then quickly find once in power that there's a whole lot more urgent stuff they have to deal with. Mr Obama began his campaign two years ago thinking that Iraq and healthcare would be his two main priorities as president.

Now, even before he takes office, Iraq has - mercifully - lost most of its immediate sting, and healthcare is in danger of being overwhelmed in the storm of crises that awaits. A brief to-do list includes a succession of pressing tasks, any one of which would be heroic in scale: economic stimulus; financial stabilisation; averting the collapse of the American motor industry; saving global trade; reversing the tide in Afghanistan.

Background
Obama planning rapid end to Guantanamo Bay
Bush unveils details of transition to Obama
Codename Renegade enters the White House
Changeover can make all the difference
If you add to that the likelihood that, within his first term, he will have to make a pivotal decision about Iran's nuclear capability and will continue waging a global war on Islamist terrorism, you get a sense of the scale.

Bill Clinton used to worry to his advisers that he couldn't ever achieve true greatness because there were no big challenges any more. He should have been so lucky. Much - way too much - has already been written about Senator Obama's capabilities. The one thing we can say with certainty is this: if he can somehow navigate the US safely and prosperously through the swirling currents of the next four years he will really have a claim to greatness.

So Washington is agog with anticipation about the arrival of the new president. But Washington being what it is, the immediate focus of frenzied concern doesn't involve tax cuts or bailouts or sit-downs with foreign leaders. It is the critical decision that will bring euphoria to some and break the hearts of others: where the Obama daughters will go to school.

I've long thought that there's a certain type of parent in Washington that rears children solely for the same reason they do everything else: to move upward in society. They would literally kill to get Nelson Jr into a particular school in the hope that it might be an entrée to some important contact. True happiness for many in this city is the possibility that little Meredith will play on the same soccer team as the daughter of the Deputy Assistant Secretary for Administrative Affairs, or if fortune is really smiling, some glamorous White House correspondent for one of the networks.

Now suddenly the prospect that their daughter might find herself in the same class as Sasha or Malia Obama - the White House Birthday Party! The Camp David Sleepover! - is, quite simply, going to drive a lot of people insane. This weekend there are thousands of wealthy Washingtonians clinging to the Audacity of Hope that their school will be selected. Many more will flood the lucky academy next year with admission applications. The city's proudest lawyers will plead with administrative assistants for reconsideration. There will be attempts at bribery. There will be blood.

When he and Michelle have finished disappointing a sizeable number of the capital city's parents, President-elect Obama will have to turn to the business at hand.

The times and circumstances of his election call not for a sharp ideological turn but for pragmatism. We trust you to do what works, was the message from the voters. The early evidence is encouraging. The selection of Rahm Emanuel as White House chief of staff is intriguing. Mr Emanuel is as sharp an operator - in every sense of the term - as anyone in this city of flick-knife-wielding political assassins.

His managerial style is famous. He is to the courtesies of polite society what Sweeney Todd was to the short back and sides. He is known for using a familiar Anglo-Saxon expletive in conversation as a convenient all-purpose verbal utility vehicle: noun, verb, adjective, adverb, participle, gerund, whatever.

But he is a cold-eyed pragmatist who masterminded the triumph of the Democrats in the 2006 midterm elections - a victory built on the selection of candidates who were notably centrist in their outlook. Whatever egalitarian sensibilities he may have had about economics and financial markets were presumably softened by his period as an investment banker, when he is alleged to have made $16 million in less than two years.

On economics, that suggests that President Obama intends to do what works. That will probably involve a mix of the middle-class tax cuts he promised and some targeted spending increases. But it could well go farther. His economic advisers are understood to be urging him to be bold, as the current crisis demands. A trillion-dollar budget deficit is not beyond the bounds of possibility. He will, if he is as wise as he seems, drop the quasi-protectionist rhetoric that might have sounded good in a campaign but will surely turn recession into global depression if implemented as policy.

Abroad, the new president will surely seek to make good on his promise to repair America's standing in the world. But he and his advisers know too that much of the damage was done in the first four years of the Bush Administration. The next four years of Obama foreign policy are not likely to be all that much of a breach with the more cautious and co-operative past four years. One early decision will have to be made on the future of Guantanamo Bay. The President-elect is already being advised on the legal and security complications of making good on his pledge to close it. But he knows its symbolism as a blight on America's reputation. Closing it might well prove to be not only the ideologically pure thing to do but also the pragmatic way to rebuild America's reputation.

The biggest political challenge is going to be how to alternately please and restrain a Democratic-controlled Congress. There's a danger and an opportunity in this. The danger is he gets pushed by them towards policies that might be unpopular. The opportunity is that he can, on occasions, stand up to their demands and win credit for his toughness - something President Bush never seemed able to do.

The Obama era will open with high expectations and high hurdles for success. The first task for the new president will be to bring both down to scalable levels.
Posted by Bob McKerrow - Wayfarer at 12:25

Kia ora Bob,
Excellent article, and I have to agree. I see it akin to steadying the ship and jettisoning dead weight while steering for calmer seas these next four years. I hope he finds a place for Colin Powell. Obama's real legacy will be built after 2012 in my hopeful view.
I had to chuckle at the thought of the rich and powerful Washington parents clamoring to find out what private school the children will be attending. Interestingly Tara and I were just having a discussion about our education system here, isn't it ironic that most of the people who make the decisions about how our public schools are funded, assessed, and monitored, send their kids to private schools.
Have a fantastic day Bob. Go All Blacks!
Cheers,
Robb

Yeh, go Alll Blacks ! Got to take our mind off politics for a day or two. Enjoyed your cutting comments about "isn't it ironic that most of the people who make the decisions about how our public schools are funded, assessed, and monitored, send their kids to private schools." A sad commentary of NZ democracy and consultation.

Just been shopping with Ruia, my daughter who is a nurse in Christchurch, and at 25 oC, most of the women are wearing skimpy tops that remind me of budding roses, or blossoming tulips. At my age Robb, I think I should put a blindfold on.