To sit by the Samovar 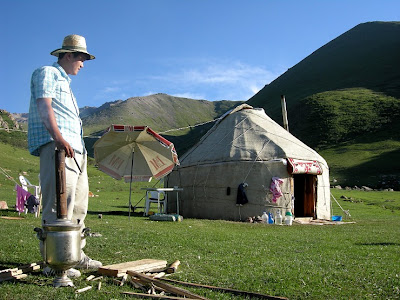 Nomadic Kyrgyz boiling water in a Samovar for tea. Note the silver coloured Sanovar at the ankles of the man who has a wood supply around him to keep it going all day. Note the pipe on the Samovar which helps the fire draw better.

Tea made from water heated in a Samovar has always tasted better than any other type of tea. Perhaps the charcoal and the smoke flavours the water. In my travels in Afghanistan, Central Asia, Pakistan and India, I must have drank thousands of cups of tea from Samovars. But I rarely get the chance to talk about Samovars but a few weeks back, Satya Tripathi and Bill Nicol came round for dinner and began admiring my Samovar collection.

The Russian expression "to have a sit by samovar" means to have a leisurely talk while drinking tea from samovar. Satya, Bill and I did just that and we had a wonderful evening talking about tea, tea shops (Chai Khannas) and the origin of Samovars and of course Afghanistan, Pakistan, Central Asia and India. I recall some vodka and red wine being produced at some stage too.

Two of my favourite Samovars are a beautiful brass one with the Royal Seal of the Czar and Czarina of Russia and dated 1895 (below in front of me on the right) and a home-made silver one I found in a bazaar in Afghanistan (in front of Satya on the left below). 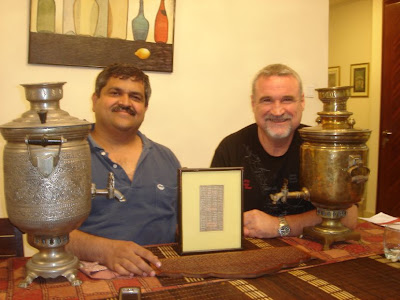 A samovar мовар, Russian pronunciation: [səmɐˈvar] literally "self-boiler") is a heated metal container traditionally used to heat and boil water in and around Russia, as well as in other Central, South-Eastern and Eastern European countries, in Iran, Kashmir and Turkey. Since the heated water is usually used for making tea, many samovars have an attachment on the tops of their lids to hold and heat a teapot filled with tea concentrate.

By the time Catherine the Great died in 1796, Russia was consuming over six thousand camel loads of tea per annum-better than 3.5 million pounds! This is especially impressive when you reflect that nobody had invented a faster camel. What they had invented, probably as early as Elizabeth's tme, was the samovar, a Russian word that means "self heater."

An 18th-century samovar of Baroque
shape, depicted on a 1989 USSR
postage stamp below. 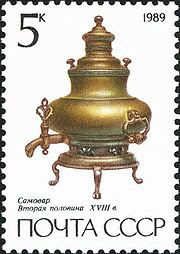 The likeliest explanation I can come up with for this invention is that the samovar is a modification of the Mongolian firepot, which operates on the same principle and was used by the trans-Ural nomads for cooking. Be that as it may, the samovar soon became a feature of everyday life throughout Russia. For reasons of tradition and economy, Russians were accustomed to a single, if mammoth, daily meal, and high and low resorted to the samovar the rest of the time, generally sipping their tea from glasses through a sugar cube held between the teeth.
Though traditionally heated with coal or charcoal, many newer samovars use electricity and heat water in a similar manner as an electric water boiler. 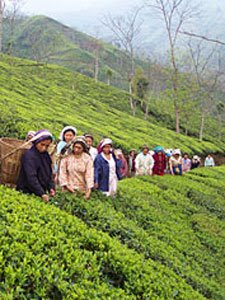 Samovars come in different body shapes: urn- or krater-shaped, barrel, cylindric, spherical.
A traditional samovar consists of a large metal container with a faucet near the bottom and a metal pipe running vertically through the middle. The pipe is filled with solid fuel to heat the water in the surrounding container. A small (6 to 8 inches) smoke-stack is put on the top to ensure draft. After the fire is off a teapot could be placed on top to be kept heated with the passing hot air. The teapot is used to brew the заварка (zavarka), a strong concentrate of tea. The tea is served by diluting this concentrate with (кипяток) kipyatok (boiled water) from the main container, usually at a ratio of about 10 parts water to one part tea concentrate, although tastes vary. 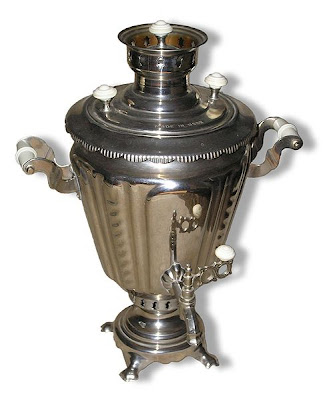 A conical urn-shaped silver-plated samovar
It is particularly well-suited to tea-drinking in a communal setting over a protracted period. This compares with the Japanese tea ceremony, but only superficially.
In everyday use it was an economical permanent source of hot water in older times. Various slow-burning items could be used for fuel, such as charcoal or dry pinecones. When not in use, the fire in the samovar pipe was faintly smouldering. When necessary, it was quickly rekindled with the help of bellows. Although a Russian jackboot сапог (sapog) could be used for this purpose, there were bellows manufactured specifically for use on samovars.
The samovar was an important attribute of a Russian household. Sizes and designs varied, from "40-pail" ones of 400 litres (100 US gallons) to 1 litre (1 US quart) size, from cylindrical to spherical, from plain iron to polished brass to gilt.

So whether it was Elizabeth or Catherine the Great of Russia who promoted the invention of the Samovar, it didn't really matter as Bill, Satya and I sat round the Samovar the other night. It was tea for all and not one slip between the cup and the lip.

Email ThisBlogThis!Share to TwitterShare to FacebookShare to Pinterest
Labels: Catherine the Great of Russia, Indian tea, Samovars, Samovars from Russia and Afghanistan, tea from samovars

Very interesting and your samovar collection is indeed very nice. I am not a tea drinker at all. I used to have a nice tea set from Turkey a traditional tea country were we did drink lots of tea in tiny glasses.

I love my tea and all the paraphenalia that goes with it. I love my samovars.

Kia ora Bob,
They are very beautiful, and no doubt economical on the wood supply as well. I never had much experience with tea till moving to New Zealand, and by then of course it was mostly a tea bag in a cup. So the experience of sharing tea and conversation through such a wonderful way would be very cool. The history behind it is fascinating, thank you for sharing. I guess in a small way, the boiling up of the billy here out in the mountains is the closest I have come. Cheers Bob.
Robb

Yes, boiling the billy, throwing in the tea leaves and tapping the side with a spoon to settle the leaves, is a great Kiwi mountain ritual. Almost beats the Samovar. However, when you are in the high Pamirs or Hindu Kush mountains, and they bring out the Samovar, the tea tastes better, the mountains clearer and the goats attractive.

Thanks Bob,
My mother once owned a samovar, purely for decoration.
I've recently bought a coal fired, brass one but I'm a bit worried about using it indoors.
How dangerous are the fumes?

Thanks for your query. A Samovar is perfectly safe inside if it is cleaned of all the old coals, charcoals, and you have the window, door or some ventilation. It is much better if you have a pipe or chimney to make the fire draw better. Like having a long chimney in a house. The more you use it the better it will work efficiently.
The Samovar shapes the house or the yurt and the house shapes the Samovar.

Oh Bob, how I enjoy looking at your samovar on the right in the photo. I have a polished brass, ornately embossed/hammered samovar 32" high X 15" wide, purchased in Leningrad in 1970. I spend endless hours on the Internet trying to identify the maker. I have it displayed on a pedestal in my breakfast sun room, spot-lighted from the ceiling. ......a beautiful sight. YOURS is the closest I have ever seen. Thanks!

Thanks to you my Samovar friend. The samovar in the photo is a classic and I am pleased you have one similar. I have just come out of our Kazakh kitchen where my wife makes tasty tea: alas, not on a Samovar. I travel in central asia quite a lot and see samovars in use.

I have two samovars and was looking for someone that does appraisals on them, the first one has many stamps in the brass dating from 1800s. My dad brought them back from the middle east back in the 1960s and up till now I did not know to much about them, also is there any books on samovars?
Lance
gyrolance@yahoo.com

I appreciate several from the Information which has been composed, and especially the remarks posted I will visit once more.
sims 4 news