Axing the Walrus at forty below

Minus 40 degrees Celsius. High above, the aurora borealis snakes a green trail across the sky. Fifty huskies curl tighter to keep out the cold… No its not a setting from Jack London but something I wrote for the New Zealand Times on March 2. 1986. 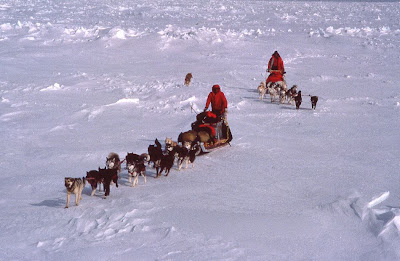 A most splendid form of travel. Photo: Bob McKerrow

An old Inuit man with a rifle slung across his back greets me warmly as he eyes the dogs and looks at the chunks of walrus surrounding me. It seems odd that he arrived on a snowmobile..
He motions towards the walrus with a broad sweep of his hand, and babbles away in Inuit. I don’t understand a word, except he makes a shape in the air of a seal or a walrus.
After a while it seems he wants to give us two seals for the dogs. I gladly accept.

The Steger international polar expedition arrived at Baffin Island, in mid-January 1986, with 50 dogs, five sledges and four months’ worth of food.
We are aiming to be the first to reach the North \Pole without outside help. All previously confirmed successful expeditions to reach the pole have relied on air support for resupply at regular intervals.
Baffin island is our base for the next six weeks, acclimatizing, training and testing sledges and other equipment.
Our daily routine seems to be uncompromising as the whether  Wake up is at 6am, breakfast at 7am, team meeting at 7.30 am.
Then its on with the daily workload.

Brent Boddy and I have been working with the dogs. They are chained into long lines in front of his house which overlooks the frozen rim of Frobisher Bay. Brent has lived on Baffin Island for ten years with his wife Nala, a local Inuit, and two children. 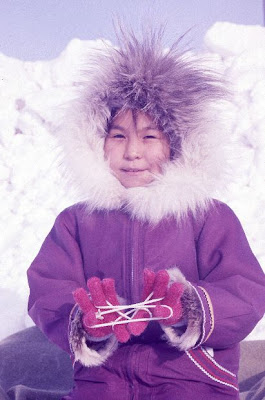 Though European, Brent has picked up many of the cultural traits of the Inuit: his sense of timelessness, his acute eye for movement on the snowy horizon and a stopped gait as he shuffles across the snow in his caribou jacket, polar beer trousers and seal mukluks. (boots)
This morning Brent repaired many of the dog chains and I axed small pieces of meat and fat off a frozen walrus carcass. These small pieces are then taken inside the house and thawed and later feed to the dogs.
Brent spent a lot of time hunting seal and walrus this summer for the expedition.
As I work away axing the walrus, my mustache freezes solid to my bearded chin. I am unable to open my mouth, but the ice shields the wind from my face. At 9.15 am a fiery red sun rises. We have four hours of daylight at this latitude. But once we start for the north pole from latitude 83 degrees north latitude, there will be no daylight at all.

I keep chopping the walrus as ice forms on my mittens. Everything is so difficult at 40 below. Sweat freezes immediately and forms a jacket of ice. 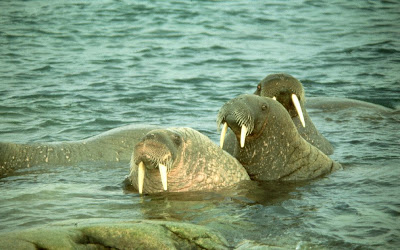 Seeing walruses playing in summer, was more pleasureable than chopping them up to feed to the dogs. Photo: Bob McKerrow


At noon we assemble at our hut for fitness training. Three are going on a 10 km ski run. Another prefers to run across the flat snowy waste by himself while Brett and I decide to do some hill running with ski poles to strengthen our arms.
At 1.30 pm we arrive back with an amour of frosty rime; a quick cup of tea and then back to expedition work. Dinner at 7.30 pm and then back to sledge lashing for the evening. Within two days our sledges will be finished so we plan to go on an extended trip over the sea ice to thoroughly check all systems. 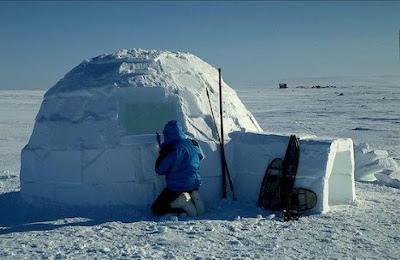 Constructing igloos was an important part of our survival training.


Igloo building is going to be an important part of this training as an igloo can withstand the power of Arctic blizzards and is much more comfortable than a tent.

The local Inuit are intrigued by the expedition. Why do you want to go to the North pole ? is the most common question. They are quick to pint out there is no food there. 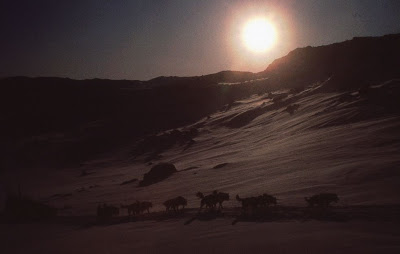 During our training trips on Baffin Island we would get the dogs to pull sldeges up hillsides while we pushed, in order to increase our fitness. Photo: Bob McKerrow

Local women have made us seal skin boots, polar beer trousers, Beaver Mitts. A nearby village have lent a team of dogs. The north West Territories government has provided us free accommodation plus a supply of seal, walrus and arctic char.

So why do we want to attempt to reach the North Pole by the most difficult and traditional means ? Perhaps the Inuit poem sums up how some of us feel.

Only the air spirits know
What I will find
Beyond the mountains
Yet I urge my sledge team on and on and on
I suppose it is basically just curiosity and a fascination of the unknown.

Do you know how far north the Inuit would have travelled to hunt? I guess they probably had their great explorers and explorer myths like other cultures.

My ignorance is complete here, maybe Wikipedia will help me out.

Dear JamieGood to hear from you again. From reading and living with Inuit, I can say they had their territories with places to catch, seal, walrus, artic char, whale etc. But there were the famines, and they would move to find better hunting grounds. believe it or not, one of the world experts on the Inuit is a New Zealander named Diamond Jenness. From 1911 to 1912 he was Oxford Scholar in eastern Papua-New Guinea, studying a little-known group of aboriginal people. He then served as an ethnologist with the Canadian Arctic Expedition from 1913 to 1916 under the leadership of both Vilhjalmur Stefansson and Dr. Rudolph M. Anderson. His detailed studies of the Copper Inuit around Coronation Gulf, and of other Arctic native people, helped establish him. Although most of his time thereafter was devoted to Indian studies (and administrative duties), he soon identified two very important prehistoric Eskimo cultures: the Dorset in Canada (in 1925) and the Old Bering Sea culture in Alaska (in 1926), for which he later was named "Father of Eskimo Archaeology." Here are some references if you want to read more about an amazing kiwi anthropologist.

Arctic Odyssey: Diary of Diamond Jenness, 1913-1916 Jenness' detailed diary while he was with the Canadian Arctic Expedition. It was edited by his son Stuart and published in 1991.
Through Darkening Spectacles: Memoirs of Diamond Jenness (2008). In this book, Stuart Jenness augmented Jenness' last manuscript into a quasi-biography.

Kia ora Bob,
I love the elegant simplicity of that Inuit poem. So much there with so few words. Something to strive for.
The sledge lashing reads as very interesting, was it the same style and material as the old expeditions, and is it a difficult skill to master? Did you ever try walrus meat yourself? I recall a lot of the indiginous people in Alaska, and no doubt elsewhere, creating a favoured dish by basically fermenting walrus meat until well and truly ripe.
Hope your week was a good one Bob.
Cheers,
Robb

Yes the sledge lashings were the same type as the old sledgees, but the wood was stronger through being laminated, and we used a nylon type cord instead of strips of seal skin.

I have tasted seal, walrus and caribou. Give me caribouu any day, for the others are too oily.

It's been a good week. Spent a morning in an orphange with over a hundred children this morning. A moving experience and so good to see them well cared for thanks to the local branch of the Indonesian Red Cross.
Enjo the weekend that is coming up. Bob

I saw really much useful information above!

Very nice post. I just stumbled upon your blog and wished to say that I've truly enjoyed browsing your blog posts. In any case I'll be subscribing to
your feed and I hope you write again soon!

Look at my webpage - Deloras