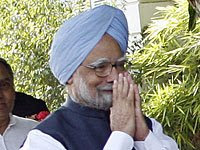 The elephant-like democracy staggers from its complex elections with a conclusion.

It's still early in the count, but the Congress have had a massive vote of confidence.
The leaders of India's Congress party have thanked the people for returning them to power with a "massive mandate".
Congress President Sonia Gandhi said they had made the "right choice" and PM Manmohan Singh vowed the party would "rise to the occasion".
Earlier the main opposition BJP and the Third Front conceded they had lost.
State television says Congress's alliance has won or is ahead in 263 seats, compared with the BJP's (154), the Third Front (60) and others (66). 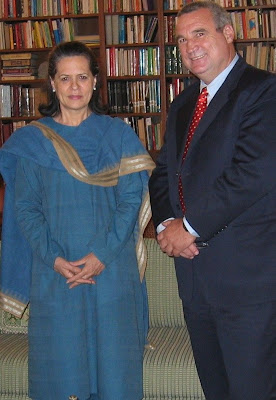 I lived over nine years in India and had the privilege of meeting many great Indian politicians including Indira Gandhi in 1975, Sonia Gandhi, Rahul and Priyanka Gandhi in 2005-6, thanks to my good friend Murli Deora, the Minister for Petroleum, who introduced me to them.

With China being the largest country in the world, America the wealthiest, India the largest democracy ; India like the former Soviet Union, holds a crucial balance of power. CONGRATULATIONS INDIA 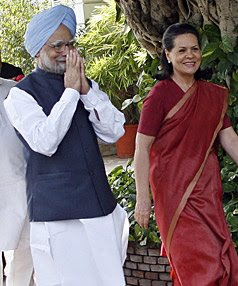 Congress Party chief Sonia Gandhi and Prime Minister of India Manmohan Singh greet the media prior to their meeting at her residence in New Delhi.

If you want to read more, I have pasted this information from Wikipedia about the amazing Gandhi family.

Three members of the family (Pandit Jawaharlal Nehru, his daughter Indira Gandhi and her son Rajiv Gandhi) have been Prime Minister of India, two of whom (Indira and Rajiv Gandhi) have been assassinated. A fourth member of the family, Sonia Gandhi, is currently Congress President, while her and Rajiv's son, Rahul Gandhi, is the youngest member of the family to enter active politics when he contested and won a seat in the lower house of the Parliament of India in 2004.

After Rajiv Gandhi's death, the Congress was led by P. V. Narasimha Rao, who became Prime Minister. After his defeat in India's 1996 General Elections, the power in the Congress party shifted to Sitaram Kesri, an aging loyalist of Indira Gandhi. During this period, Sonia kept herself and her children out of the public limelight, not wanting them to face the fate of her husband and mother-in-law.

The party loyalists always wanted a member of the Nehru- Feroz Gandhi family to lead the party, as its fortunes slipped in elections around the nation. Despite her reluctance, Sonia Gandhi was eventually persuaded to become active in the Congress Party, and she quickly became its center of power, forcing Kesri's resignation and allowing her uncontested assent to the party's Presidency in 1998.

The following period saw her becoming increasingly visible in politics (She is attributed to engineering the downfall of the Vajpayee government in 1999, in an unsuccessful attempt to install a Congress government). During India's 2004 General Elections, Sonia was projected the Congress's Prime Ministerial candidate, and the party and its allies emerged as the largest group in the Lok Sabha, with the Communist parties supporting the coalition from outside. Initially, every coalition partner and the Communist parties had accepted her as the Prime Minister. The opposition BJP held nationwide protests against a 'foreigner' ascending the Prime Minister's post.

On May 18, 2004, Sonia Gandhi declined the Prime Ministerial position, passing it on to Dr. Manmohan Singh. At these elections Rahul Gandhi was elected to the Parliament for the first time, representing a fifth generation of the family in politics from a traditional Gandhi stronghold, Amethi (Uttar Pradesh). Her daughter, Priyanka Vadra, did not contest the elections, but campaigned for the party. Many Congress leaders and supporters have vocally promoted her future as the party's leader, but she has not accepted a life in active politics, so far.

THE NEXT PRIME MINISTER

Rahul Gandhi and his sister Priyanka managed their mother's campaign for reelection to Rae Bareilly in 2006, which was won easily with a margin greater than 400,000 votes.

He was a prominent figure in a high profile Congress campaign for the 2007 Uttar Pradesh Assembly elections; Congress, however, won only 22 seats with 8.53% of votes. The election saw the Bahujan Samaj Party, which represents low caste Indians, to become the first party to govern in its own right in Uttar Pradesh for 16 years.[18]

Rahul Gandhi was appointed a general secretary of the All India Congress Committee on 24 September 2007 in a reshuffle of the party secretariat. In the same reshuffle, he was also given charge of the Youth Congress and the National Students Union of India.[20]

In his attempt to prove himself as a youth leader in November 2008 he held interviews at his 12, Tughlak Lane residence in New Delhi to handpick at least 40 people who will make up the think-tank of the Indian Youth Congress (IYC), an organisation that he has been keen to transform since he was appointed general secretary in September 2007.

Senior Congress leaders such as Pranab Mukherjee, Digvijay Singh and Arjun Singh have raised calls for Rahul Gandhi to be the candidate for Prime Minister. It is felt because of his young age and clean image, he would be able to connect with the youth of India who form the majority of the population.

Having met all the current Gandhi politicians, I believe Priyanka is the most able of them and we will see her develop her talents in the years to come. She is very much like her Grandmother Indira in many respects, but it is more likely Rahul will be the next Prime Minister, should Manmohan Singh decline or retire from position.

Though your expectation is reasonable, Ms Sonia Gandhi has very well established that Mr Manmohan will be the Prime Minister even before the commencement of elections and he is the fittest I think.

I should have made myself clearer. I should have said, and I changed it accordingly, that should Manmohan Singh decline or retire from the position, Rahul Gandhi is likely to get it.

Hi Bob Nice to see you again. Hope you are doing well.
I meet many people from India on the blog. It was good to learn more about their country and politics.

Welcome back. I must check your blog and see what you have been up too.

India is a fascinating country and I am pleased their democracy is wrling well.

Eva Mentis seemed like someone who had gone though what I was going through so I ordered the product
I got it in 10 days and I started using it immediately From the very first
application I could feel a difference. - If your
hair feels rough, condition it right away. Almost
from the time of our grandparents and other ancestors, the advantages of
using olive oil are known to all. In this manner you can choose
the herbs that are right for you. These resources side by side also promote
healthy hair growth and hair growth which are preferable to other
medications.

One should apply minimal pressure to lift these concrete grinders and also hold
it in flat motion while working. Make sure that you don't end up with a look of patches by checking to see that the glitter falls all the way around the edges of a newly-painted area. It is advantageous for the customer to compare the prices for an additional dumpster rental from the normal waste removal company against an offer made by a collector that will place a dumpster for a one-time pickup.

Next, blend the oils and massage into scalp for two to
four minutes before sleep. For the thick and curly hair, it is best to use the Moroccan Oil.
Almost from the time of our grandparents and other ancestors, the advantages of
using olive oil are known to all. Since ages coconut oil has been used for curing skin
as well as hair problems as it has anti fungal and anti bacterial properties.
5 ml Kalonji Oil mixed at a hot drink after
supper gives a quiet sleep all during the night.