The ticking of clocks

The ticking of clocks is not an idle sound
life flows by, my friend, their beating repeats
A minutes is like an age for a man:
it goes, it dies, and the circle of life is closed

In a clock's rustlings is past life
if it dulls a soul or comforts it,
still reason knows that time is treacherous,
it goes past as though its tick is harmless.

A day, a month, a year goes off in to ashes,
old age comes, time flows away...
Since transient time beckons us pitilessly,
Oh, imperishable Creator, have mercy upon us !

Over the years I have been reading many of the great Kazakh writers, poets and philosophers and one stands out above all others; Abai. He loved his people as no other and that's why his words ooze the blood as his soul bleeds. One of his early poems is about the ticking of clocks (1880) I posted above. 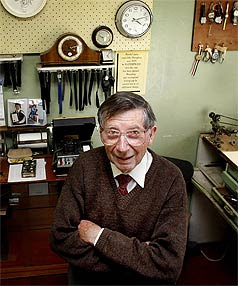 In New Zealand time has finally run out on the 53-year career of a Wellington watchmaker.

Eric Matthews, 79, first retired from his Caledonia St in Miramar shop in 1990 when he was a sprightly 60, but he quickly became bored with chainsawing firewood and drinking beer with retired friends at his Miramar North home.
"I quickly found chainsaws and beer are like petrol and matches. They do not make good bedmates."

After six weeks he returned to the tiny premises where he first set up his business in 1956. Since his 1990 "retirement" he has repeatedly told himself for the past 18 years that he would "just keep the business going for another year".

Now the man who believes himself to be the longest-serving sole trader in the same Wellington region shop knows there will be no going back.

"I've sold my tools. There is no way I am going back," Mr Matthews, who wears a Certina Swiss watch, said.

Mr Matthews, who did his apprenticeship with Wakefield St watchmaker Jack Shields after leaving Wellington High School in 1945, is looking forward to spending more time playing golf with his friends. 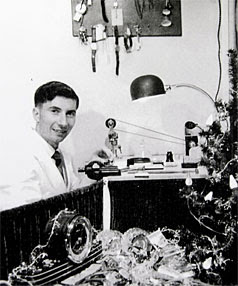 Eric Matthews in 1956, the year he started business in Caledonia St, Miramar.

Asked whether he would miss fixing watches and clocks, he responded: "No way. I did it for money. I've done my time."

So Eric, would you agree with Abai's words ?

In a clock's rustlings is past life
if it dulls a soul or comforts it,
still reason knows that time is treacherous,
it goes past as though its tick is harmless.
Posted by Bob McKerrow - Wayfarer at 02:27

Great poem Yes time is a weird thing. It goes faster when you are busy but when you fully attend to your surroundings it seems to go slower.
I like clocks BTW Have seen some beautiful ones on my trip

Clocks, watches and time are fascinating. henry David Thoreau wrote:
time is but the stream I go fishing in.

Good to hear from you.

Kia ora Bob,
I like relating time to a day in the mountains, where the only thing that matters is the moment we are in, lightness and darkness. It seems to slow the day down for me for some reason.
I read the article in the paper and wonder what he might think.
Still in the Naki, the still elusive mountain revealing herself and her now snow covered peaks, then melding into the clouds again. It is cold here!
Cheers,
Robb

I am friend of Robbs and have read many of your comments at Ruahine Ramblings.

Clocks and time have always fascinated me. I remember at the age of 4 being enthralled by the innerworkings of a watch that I dissected. Of course I could never get it back together again.

The time poem in your post is timeless. Tick, tock.

The moment in the mountains is what it is about. Saviouring the moment and forgetting about time. But then the great French mountaineer Gaston Rebuffat said. " I prefer dreams to memories." True, but was he living the moment ?

Grandfather clocks and Town Hall clocks fascinated me as a kid as did my clockwork train. I can just see you taking that watch to bits and being unable to put it back.

Time is as probably much talked about as the weather.Abai's poem captured the real essence to time being a thief. But who invented time and time pieces ? We did, or our forebears.

Have a relaxing day.

Tick-tock softly tapped in the stillness of the night little old clock counting down for another of my grandmother. Tick-tock - a measured, leisurely. Tick-tock - the birth and death between two clock ticks.
And second of a tuk-tuk-tuk - a beating heart.
Listen to the sound of the heart
By measuring the course of hours.
Draught continuous separations,
Unspoken words
Not giving flowers,
And do not warmed hands.
Things to under the watch
Hear the sound of the heart.
Do not betray yourself
Feel the love
Things to take-off date
To be born again.
Get rid of the shackles
Grievances, unnecessary lie.
By measuring the rates of clocks
only the sound of hearts in silence.

Great words and rimes, when I was a kid I remember that I was obsessed with clocks.

thanks for sharing the post is veary usefull for me textnab