The skyline of Ahmedabad filled with smoke as buildings and shops are set on fire by rioting mobs.

From my diary in early March 2002.
Last Thursday I was in Ahmedabad, Gujarat, where serious communal violence between Hindu and Moslem broke out on 27 February. Over 800 people have been killed; or more bluntly, hacked to death or burned , and up to 100,000, predominantly Moslem's have been seeking refuge in camps. Sporadic out bursts of violence continues.

When this broke out we immediately gave the Indian Red Cross US$50,000 to start a major relief operation. Foreigners have been kept out of the rioting areas and I was probably one of the first foreigners to go in last Thursday, with the secretary general of the Indian Red Cross, Vimala Ramalingam.
It was quite moving and so sad to move amongst people who had many of their family members butchered by home made knives and swords. One mother told me of watching someone cut her son's head off with a sword and another woman told me of how she watched her pregnant neighour killed as an attacker ran a sword through her pregnant belly killing the baby and her. Others told of how Hindi activists set fire to their homes and of the many family members incinerated alive. Walking amongst these people with fear etched on their faces and clutching at us for security makes you dig deep as to how Red Cross can solve these problems. The next day by colleague Mauricio Castano came in with a large Indian Red Cross relief convoy of mediacl and relief supplies. 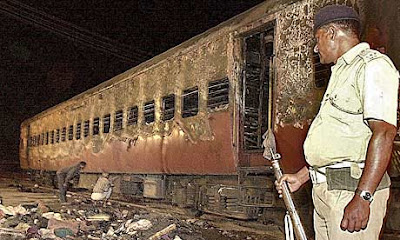 The Godhra train fire killed 60 Hindu pilgrims and activists in February 2002 and triggered some of the worst communal violence in India in decades.

Fortunately we have learnt from a Red Cross initiated programme in Bangladesh between tribal and non-tribal people in the Chittagong Hill tracts who had been at war and killing each other for 25 years. This community peace programme aims at reducing community tensions through working with opposing communities and identifying connectors and dividers and working on strengthening the things which positively connect communities.
I have been reading Erich Fromm the German-born psychologist and psycho-analytical theorist in an attempt to understand why people hate and kill each other.. He said the first step in understanding our destructive disposition is to recognise the two kinds of hate inherent in humanity. The first kind of hate is rational hate. It is expressed in reaction to a threat to one's own freedom, life or ideas. It has a biological self-protecting function. It comes as a reaction to a threat and dissipates when the threat is removed. It is not against life but for life. This type of hate manifested in the cry of a baby who is hungry.

The second type of hate is irrational hate.. Rather than reaction to a specific threat, it is a character trait in some people. It is marked by readiness to be hostile to others. This is a passion to cripple life, a strong impulse to cruelty or a pathological aggressiveness. People with this kind of hate seek a target to attack. They do not wait for an incident to occur, they create it. Such people are found among the leaders of racists mobs and organisations and sometimes among the ideological 'theorists' of hate movements.

This destructive potential is proportionate to the individual's inability to express his capacities - sensory, emotional, physical, intellectual and productive.

When you work in these storehouses of sorrow and see so much killing and destructions, searching for answers helps one to design appropriate reconcilliation programme.   For more information read Joe Prewitt's article a psychologist who worked for the american red Cross at that time: Link here

Here is the press release we issues\d at that time.

Tens of thousands of people who have sought refuge from communal violence between Hindus and Muslims in the Indian state of Gujarat, are still in need of help, says the International Federation of Red Cross and Red Crescent Societies.

The Indian Red Cross, the first and only humanitarian organisation to provide medical and food assistance to victims of the violence that broke out last week, has distributed relief supplies in two refuge shelters in Ahmedabad. Further distributions are taking place today in three other temporary shelters.

Nearly 5,400 people taking refuge in a hall and a school in the northeast of the city, most of whom had received no outside help, were given blankets and basic medical supplies by Indian Red Cross volunteers on March 5. The medical supplies were badly needed due to a high number of burns victims.

"We found the people at the school living in basic conditions and the sanitation situation due to the overcrowding, was worrying. People wanted to find out what happened to their homes but are still frightened of leaving the compound," says Mauricio Castano of the International Federation, who accompanied Indian Red Cross workers.

So far, the Indian Red Cross has identified 11 temporary refuges in the city and is working with local authorities to locate others. Shelters have been set up on an ad hoc basis in schools, shopping centres and open spaces by local communities. The commercial capital of Gujarat, Ahmedabad has suffered the worst of the violence.

Meanwhile, assessments in both Ahmedabad and other areas in Gujarat severely affected by disturbances, such as Himmatnagar, 80 kms north of the city, are on-going. Outstanding needs are for medical supplies, food, water and clothes which will be met by the Indian Red Cross. It will also provide medical supplies while the Ahmedabad branch has already sent a team of two doctors and nurses and an ambulance to three sites today. In addition, it will provide the homeless with food baskets containing rice, dhal and milk.

Indian Red Cross staff and volunteers have been working since the beginning of the crisis when 58 people were killed in an attack on a train by providing first aid to those injured, blood supplies to four main hospitals in Ahmedabad and in helping to identify those killed. Red Cross ambulances also helped the authorities to evacuate the injured when clashes first began.

For the past eight days, the Red Cross has been virtually the only organisation to move freely to provide assistance to both Muslim and Hindu communities. "Our work has been possible because people know and understand the Red Cross emblem and realise that we are here to help anyone regardless of their religion. Neutrality and impartiality are core principles for us, enabling the Red Cross to work where others cannot," says S.K. Sharma, Organising Secretary of the Gujarat State Branch
Posted by Bob McKerrow - Wayfarer at 21:36

I like what you guys are usually up too. This sort of clever work and reporting!
Keep up the very good works guys I've added you guys to my personal blogroll.