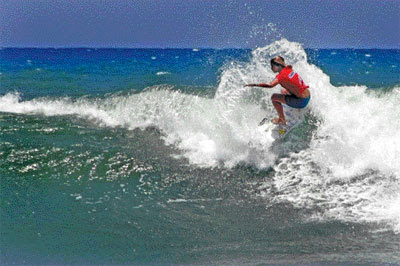 Courtney Conlouge (USA), the ASP women’s world ranking number one riding on a wave at the women’s short board event finals at Arugam Bay on Sunday. Pictures by Sulochana Gamage 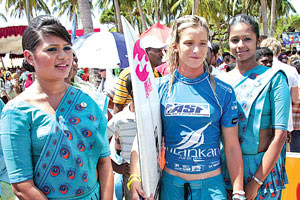 The 19 year old Californian Courtney Conlouge walked away with the women’s short board championship crown in the SriLankan Pro-2011 international surfing competition finals on the superb waves of Arugam Bay yesterda, 5 September 2011. 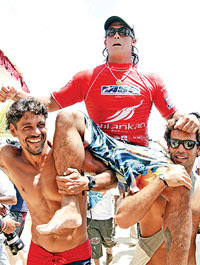 Men’s Long Board Champion Duan Desoto carried by his friends


There were plenty of surfing tricks exchanged between the men’s finalists where Duan prospected with some superb back hand turns. “I am so exited to win the title and we got some first class steady waves here in this beautiful beach and I am very happy,” said the men’s champion just after he completed the final. He appreciated the Sri Lankan hospitality and said that he will be back for the next year’s contest too. Courtney with overwhelming joy said that it’s great to win the event after having a tough battle with Lakey who was in good form.

Duan beat Australian Harley Ingleby in the semi-final while the runner up Taylor Jensen (USA) qualified for the finals by defeating his Brazilian rival Rodrigo Sphaier in the semis. In the women’s semi-finals Courtney performed with an excellent 9.9 to beat the French surfer Paulinc Ado and Lakey booked her place in the final after beating New Zealander Sarah Mason in the other semi final. 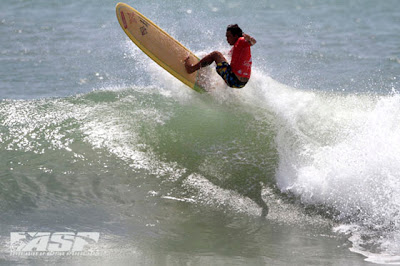 Arugam Bay greeted with excellent waves on the final day of competition and the beach was filled with a dense crowd who came to witness the event. SriLankan Air lines and ASP along with the Lanka Sportsreisen with the support of Sri Lanka Tourist Board conducted the championships. 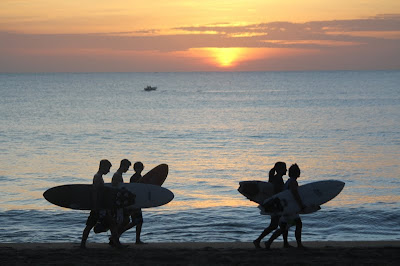 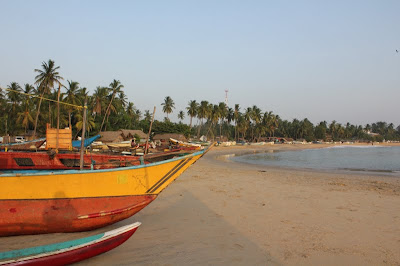 I don't know if it's just me or if perhaps everybody else experiencing issues with your blog.
It appears as though some of the written text within your content are running
off the screen. Can someone else please comment and let me know if
this is happening to them too? This could be a problem with my web browser because I've had this happen before. Appreciate it