Last weekend I spent a lot of time sorting out my photos of the New Zealand mountains and I thought I would post a few of my favourites.. I spent many years working in the NZ mountains as a guide, running national parks, outdoor education work and as an amateur climber. 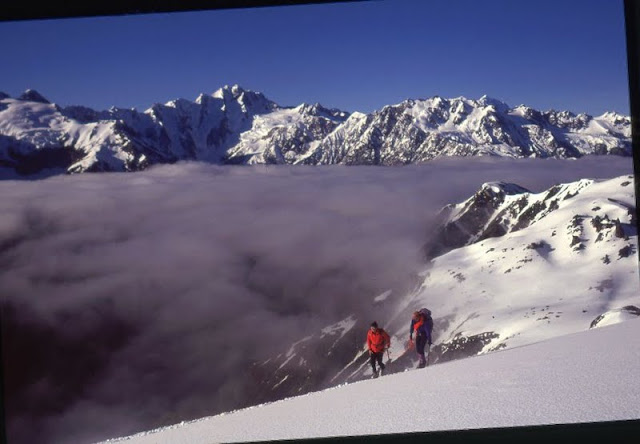 Mike Browne and Chris Jillet heading up from the head of the Tatare to Mt. McFettrick. Photo: Bob McKerrow 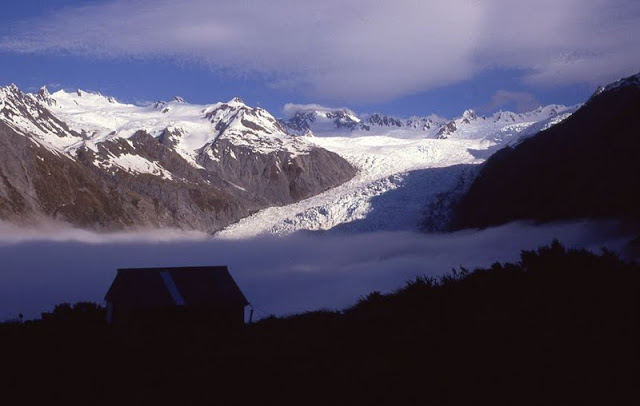 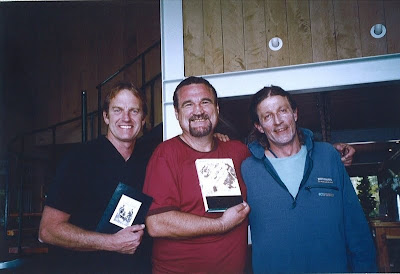 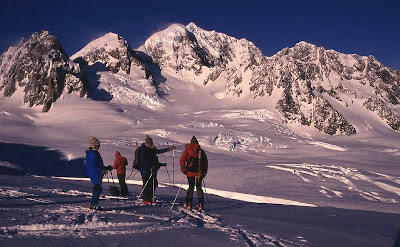 Skiing with a bunch of friends at the head of the Franz Josef neve. Photo: Bob McKerrow 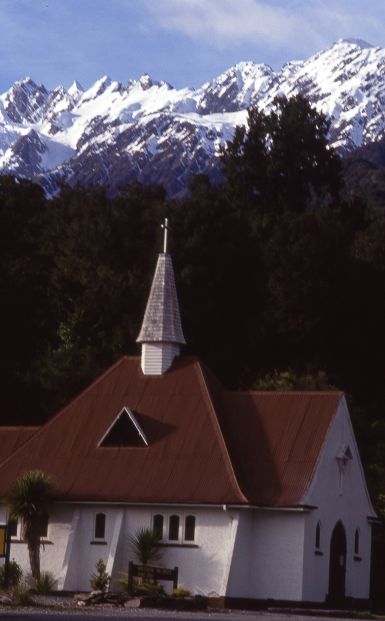 The Catholic Church at Franz Josef in winter. St. Mildred peak and its satellites on the skyline. Photo: Bob McKerrow 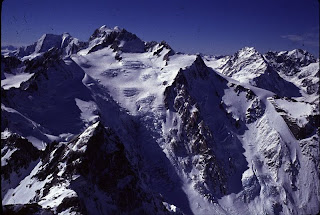 The Minerets and Eli de Beaumont and peaks at the head of the Tasman Glacier. Photo: Bob McKerrow 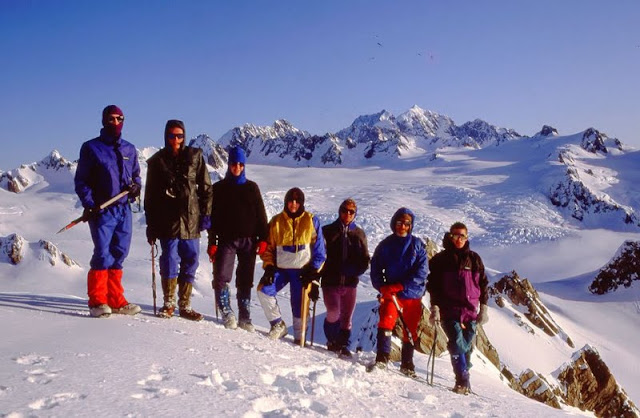 With 6th and 7th form pupils from Westland High on the summit of St. Mildred overlooking the Franz neve. This was sponsored by the Charlie Douglas young explorers scheme. Photo: Bob McKerrow 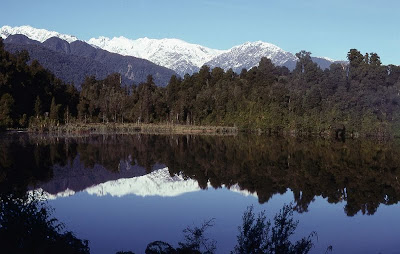 Lake Mapourika, near Franz Josef and the Fritz Range with St. Mildred's Dome on the far left. Photo: Bob McKerrow 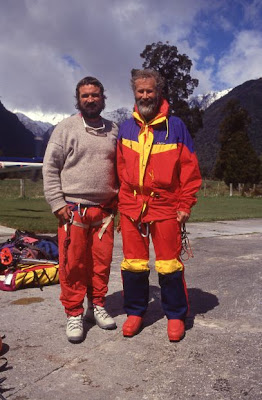 With Chris Bonniungton (l) at Fox Glacier after skiing down from Pioneer Hut: Photo: Mike Browne 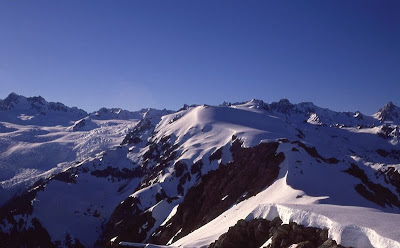 The Fritz Range with the Minarets on the far left top corner. Photo: Bob McKerrow 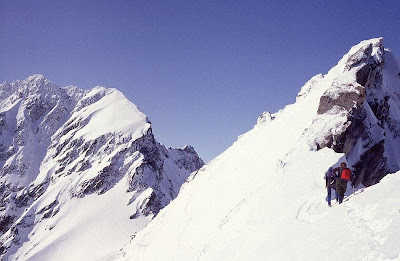 A climber heading toward the high peak of Red Lion. Mount Evans to the left. Photo: Bob McKerrow 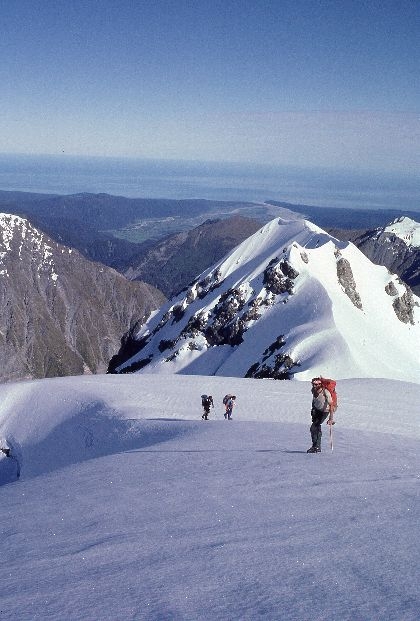 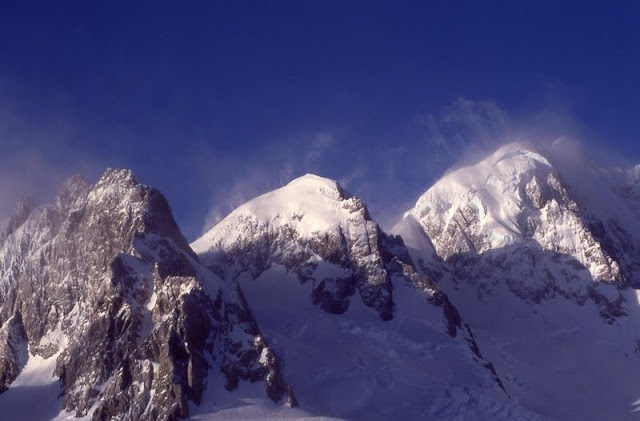 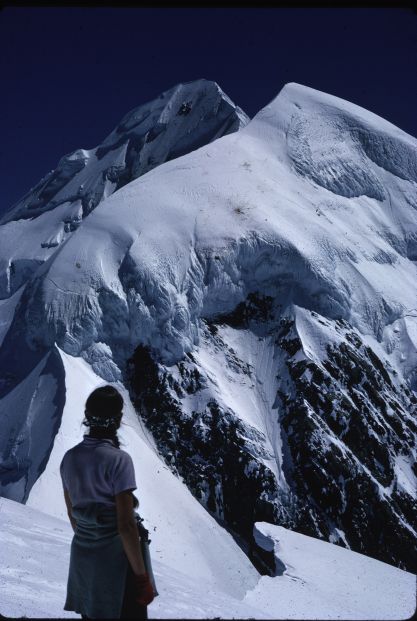 On the summit of Lendenfeld with Pene Evison, looking to the north shoulder of Tasman and beyond. Photo: Bob McKerrow. 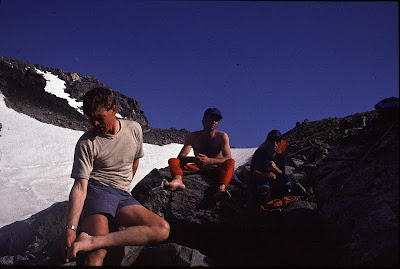 The blistered feet of Stuart Drake (l), Jerry Feazey and Barry Hanson after we had come over Graham Saddle and stopped for the day at de la Beche. Photo: Bob McKerrow
Posted by Bob McKerrow - Wayfarer at 00:36

Kia ora Bob,
Like a history book. Great photos that stir something within me. Not quite sure what but whatever it is has me glancing towards the garage where my pack and boots lie waiting.
Tara and I were discussing last evening the possibility of over Christmas doing a South Island venture with our youngest son Charlie. Wondering if it might be possible to meet up with you, and if all the gods look upon things right, perhaps Donald and maybe a venture into the mountains for an evening or two. I would settle for a few cold beers and a barbeque, but why not aim high! Anyway just putting it out there as an idea, of course I know your time is busy and relatively short, but obviously Tara and I would love to catch up with you e hoa. Send an email when you get a chance.
Cheers,
Robb

I know what you mean about photos of great mountains have me looking at my climbing gear, or what is left of it.

I have been talking to Donald about a climb. I could be the expedition manager and motivate you two to climb Aspiring.

Jamie, Yes. we call it homr for many reason, one of the big reasons is the hills, lakes, rivers, mountains and coastline.
Are you and Penny going to be up Wanaka way at Christmas? I will be in Wanka over New Year and Robb is thinking of coming up too.

Safe travels. Are you in Nepal yet.

Magnificent photos The Haast lendenfeld and tasman peaks are stunning. Nz Zealand is paradise on earth.
Just a tip to make your photos fit in the column. Got to design>template designer>adjust width and drag the slider to the right. Arohanui marja

Great selection of stirring pics, of great mountains, and obviously memorable trips. Hard to say which one is my favourite image.

Some faces I know... Charlie H. looks young! Bonnington... at least had a cuppa with him at the local high school... he had a fascinating assessing flavour of look in his eyes.

Robb, if you see this, then all welcomes would be extended to you if you make it down here over the time of Bob's visit. I'll give you ring re. this soon.

Thanks for your tip on fitting the photos. I agree, the Haast, Lendenfeld and Tasman photo is a beaut. And what makes it better is, I have climbed them all a number of times.

Hi Donald, Pleased you enjoyed the photos. Charlie and Chris B have made their impact on the mountains and both fine men.

Wouldn't it be great to catch up with Robb too.

Kia ora Bob,
If you are serious Bob I would be honoured, excited, and consider it one of the highlights of my life to get into a mountaineering experience with you and Donald, regardless of the mountain,and Tara is keen on the idea of a South Island holiday, so let's make this happen.
Donald I will look forward to hearing from you, or get in touch via email. Have a wonderful day gentlemen.
Cheers,
Robb

Anything is possible in this day and age. For me it would be more convenient going for a climb after New Years day as I want to spend time with family first when I arrive in central otago. Cheers and enjoy teh weekend.

Bob, seeing these photos left me closer to longing for Aotearoa than I've been so far on this South American journey. In a good way, of course — something to look forward to when I return in December. Thanks!

It will not succeed in actual fact, that is what I think.