Curry for breakfast and no bloody war Sri Lanka 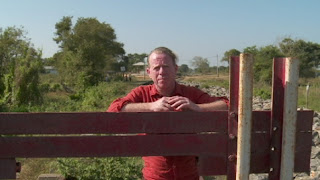 "Spicy prawn curry, dahl and paratha washed down with a cup of sweet milky tea certainly gets the day off to a flying start. As the Sri Lankan sun sears you from the outside, the breakfast works from within," said Chris Cummins , pictured above, from Euronews on the Euronews website the other day.

About 6 weeks ago Chris Cummins and a EURONEWS cameraman came here to make a documentary and I had a long discussion with them here in Colombo before he set off. The IFRC (Red Cross) tries to facilitate the visit of the media for vulnerable people need visibilty, which usually equates to further funding for our work.

So this is what Chris had to say about his trip up north in Sri Lanka.


It was in such a charged-up state that we started filming in Kilinochchi in the north of the island, home to the Sri Lankan Tamils.

It is hard to imagine the daily difficulties faced by the Tamil community. For decades the Tamil Tigers have waged an insurgency or freedom fight against the mainly Sinhala government based in the capital Colombo.


As the conflict dragged on, the north of Sri Lanka was effectively cordoned off from the south, road and rail links severed, trade reduced to a trickle and the communities set apart.


Plenty of check points and weapons, no work or food unless you took up arms to fight for the cause and when the Tigers came calling you didn’t say no.


Since the war ended in 2009 after tens of thousands of deaths and widespread destruction, the community has been getting back to some kind of normality.


There is now a sense of optimisim in the north as schools and power lines go up and road and rail links are re-established.


The Red Cross is heavily involved with the communities, helping them rebuild their lives as part of their Post Conflict Recovery Programme.


The politics behind war are constantly debated (not here) but ordinary people just want the bombing to stop and the fear, hunger and insecurity to end.


The brutality of war rips humanity apart and in the north of Sri Lanka my lasting impression was that everyone was delighted the bloody thing was over.

Here is the link to the Euronews documentary Chris and his cameraman made during their time in the north of sri Lanka.