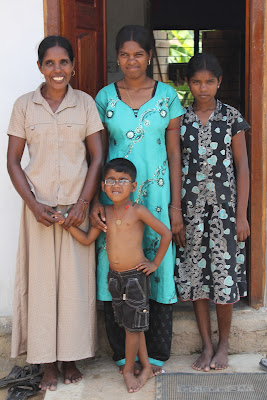 Returning to Colombo after a week-long field trip, is a time a reflect, write and sort photos taken on the trip.

While returning to Colombo last Friday, I wrote this in my diary"

Each day I learn a little more on how to map the human heart. This week I have visited over 20 villages in Anaradhapura, Kilinochchi and Jaffna districts. I see joy and suffering, hardship and kindness. Our Red Cross work restores life and livelihoods after conflict and floods. The map charts the extremes of human deeds, emotions and actions. A life saved, a life taken, it is all mapped.


I travelled with Michael Annear, Head of the Disaster Management Unit for IFRC Asia and Pacific Zone. Michael is an engineer and an expert on risk reduction so Nimal Silva, Dr. Mahesh and I appreciated his expertise as an Engineer, and someone who understands 'surge capacity' and 'scaling up.'  With 3000 houses almost completed, we are trying to secure more funding to scale up and reach more of those 100,000 families without permanent houses.

We met an inspiring  lady who led this house-building programme and she told us how she moblised voluntary labour from the communities, particularly to construct houses allocated to widows. A group of smiling women and children flocked around us and thanked us for the support to their community. 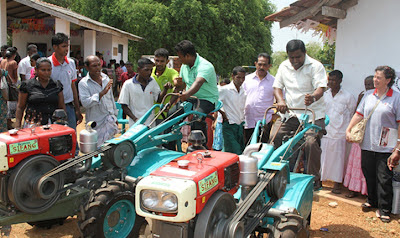 Next we inaugurated a community centre which was 50% funded by the Red Cross and the rest given by the community. Here we had a few speeches for World Red Cross Red Crescent day and then presented tractors to poor, flood affected farmers, kitchen sets and mosquito nets to other villagers, and school bags and kits to children.


On Wednesday morning I met up with Michael and we travelled to Vavuniya where we teamed up with Nimal Silva (SLRCS) and Dr. Mahesh (IFRC) who run our ever-exanding Post Conflict Recovery Programme. (PRCP). We all travelled to Kilinochchi district where we have built 900 houses, provided water and sanitation, and livelihoods. We visited Krishnapuram and Michael had the chance to see the programme for the first time. He was impressed with our integrated or holistice approach and spent much time examining the owner-driven houses, the latrines and water supplies, but the thing that grabbed his attention, was the varied livelihoods programme. He spoke to a number of villagers and went to see their fields and saw how their lives have dramatically improved since receiving livelihood grants and training. 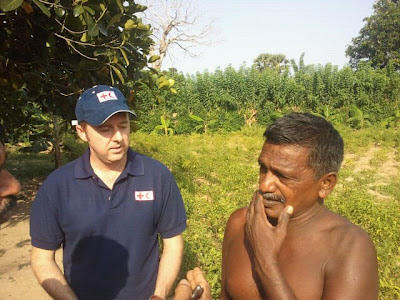 Michael Annear talking to Sinathamby Vellachame who has a Red Cross funded house with water and toilet, standing in front of his chilli field which is an integral part of the Red Cross livelihood programme.

On Thursday we travelled to Karainagar a small island off the coast of Jaffna. This was my second visit to this very poor part of Sri Lanka where we are building 70 houses in two villages. In the first village 16 recepients of the owner-driven houses are widows as so many men were killed in the brutal conflict. Conditions in the village are grim with no potable drinking water and the poorly dug wells produce a sour and brackish water, and drinking water has to be trucked in daily. Since my last visit in late January this year, people are smiling and everyone in the two villages are building their houses. Men split wood for the roof, masons skillfully position and cement bricks, while women cart sand and stones. Before and after school, children contribute to the family owner-driven approach to house building. 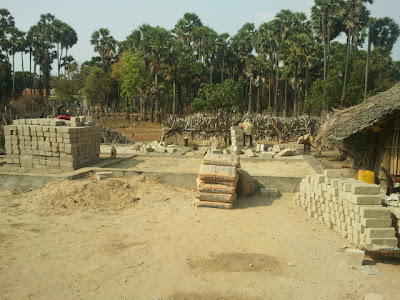 Karainagar. After 3 months since starting, foundations are complete and the walls start going up. Each house takes between six and ten months to complete. 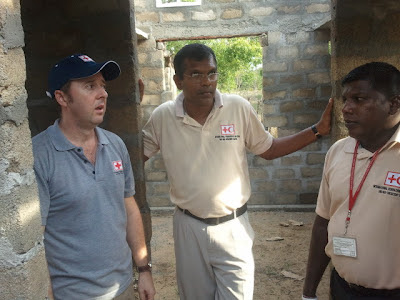 We left Jaffna late Thursday morning and embarked on a 2 and a half  hour drive to Mulankavil half way down the west coast of Kilinochichi, which must be the remotest part of Sri Lanka. We have an office at Mulankavil and we stopped there to pick up members of our dedicated Red Cross team. 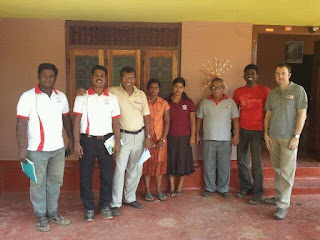 The Red Cross PCRP team in Mulankavil with Michael Annear. Living conditions are basic but the committment shown, 'beyond the call of duty' is impressive.

In and around Mulankavil, we spoke to those building Red Cross houses, putting in latrines and water supplies and discussing livelihhoods. I am sure with 3000 houses nearing completion, we have got the formula right.
..
It was a successful trip and a chance to look at where we are with the current programme, and to further develop a methodology to market what we are doing and the need to advocate for those 100,000 families without permanent housing. I am hopeful some of our partners will get behind us and fund more houses, watsan and livelihoods.  Thanks to Michael Annear for joining us. 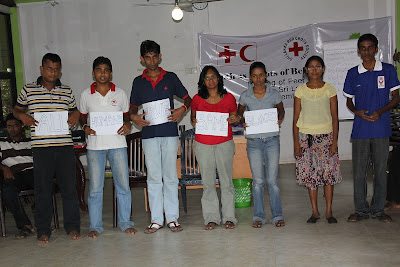 But it is so easy and understandable to focus on the hardware side of the project, but we are also dealing appropriately with people who have been traumatised by a 25 year long conflict is something the Red Cross quietly does as a cross cutting initiative. The photo above was taken at a YABC workshop I attended last year in Vavuniya.Youth as Agents of Behavioural Change (YABC) is an initiative to empower youth to play a lead role in transforming mindsets, attitudes and behaviour in their local community. It starts from the premise that a prior commitment to inner change and being the living example of our Fundamental Principles and Humanitarian Values is the best way to reach this objective.

YABC uses innovative and artistic platforms; it integrates peer education and non-cognitive learning to promote behavioural change and uses games, role plays, visualisation, drama, dance and art for youth to make the journey "from the heart to the mind" and succeed in social mobilisation.

In 2008-2009, the IFRC P&V department in Geneva developed a draft skills-based toolkit for YABC, together with the Youth Commission, Youth focal point of the Organisational Development Department, and a network of youth leaders from 42 National Societies world-wide. Here is an update on what we are doing in this respect. 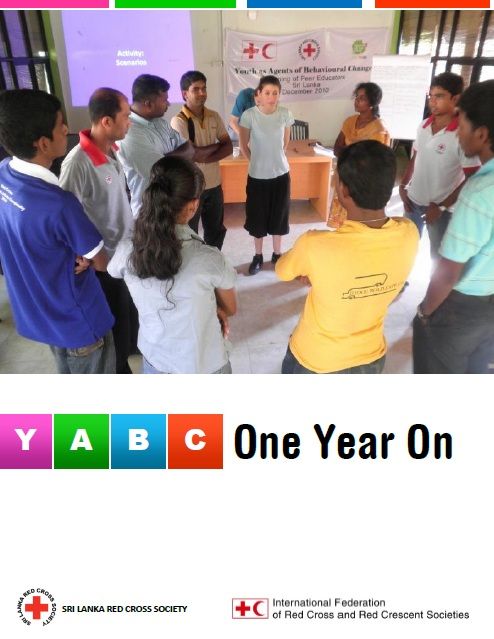 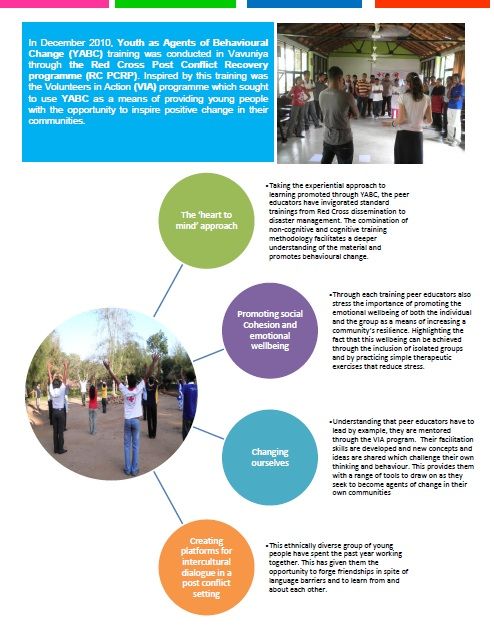 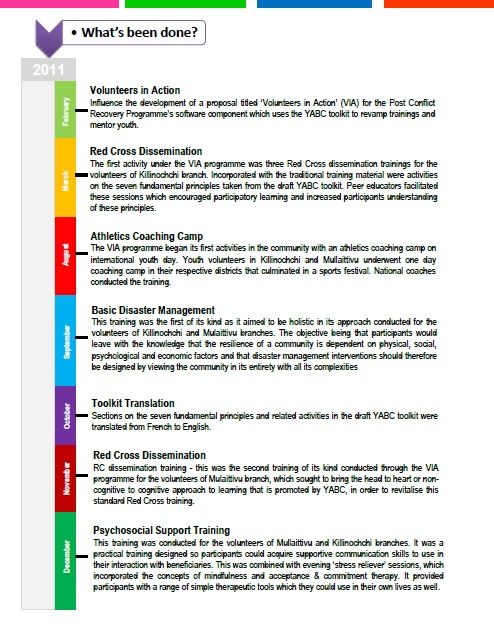 This is great way to serve people and you will get relief after visiting these type places for serve.

Woah! I'm really enjoying the template/theme of this site. It's simple, yet effective.
A lot of times it's tough to get that "perfect balance" between superb usability and appearance. I must say you have done a awesome job with this. Also, the blog loads extremely fast for me on Firefox. Superb Blog!

It is really a great and useful piece of information.
I am satisfied that you simply shared this
helpful info with us. Please stay us up to date like this.