I first celebrated World Red Cross day in South Vietnam in 1971, and in 41 years have participated in ceremonies in Himalayan Kingdoms, Pacific Atolls, three in war-torn Afghanistan, once in an elegant ballroom in Jakarta, deserts in Ethiopia, villages in southern India, diplomatic enclaves in New Delhi, slums in Bangladesh, and in the streets of Geneva when we celebrated the 150 anniversary of the birth of Henri Dunant.

After attending 41 birthday parties for dear Henri, I feel I should become an honorary member of the family.

Today was distinctive, and definitely different. I have never celebrated with people who had just received houses, running water and sanitation and livelihoods support. This was a community who were beneficiaries of a Red Cross flood recovery programme in Anaradhapura, so it was a double celebration. One for Henri and one for safer communities.

After a five hour drive from Colombo, I teamed up with Baratha, the vice president of the Sri Lanka Red Cross, Tissa Abeywickrama, the director general. DG of SLRCS, and the chairman of Anaradhapura branch. First we visited the village Kakula which was totally inundated by flood waters in January and February 2011 and where the Red Cross has built 34 houses under the flood recovery programme. ( During the flood recovery programme we built 1400 houses in 8 districts.)

We met the lady who led this house-building programme and she told us how she moblised voluntary labour from the communities, particularly to construct houses allocated to widows. A group of smiling women and children flocked around us and thanked us for the support to their community. 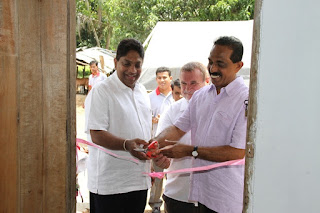 Tissa Abeywickrama, (l) the director general SLRCS with Baratha, (r) Vice president SLRCS, with the writer in the centre at the inauguration of houses build with  funds from the flood recovery operation

Next we inaugurated a community centre which was 50% funded by the Red Cross and the rest given by the community. Here we had a few speeches for World Red Cross Red Crescent day and then presented tractors to poor, flood affected farmers, kitchen sets and mosquito nets to other villagers, and school bags and kits to children. It was such a joy to be with RC youth and to see them working in communities and involved in all programmes. These flood prone areas are now safer and more resilient thanks to Red Cross support.
Posted by Bob McKerrow - Wayfarer at 04:09

This isn't necessarily a bad thing for what it's worth, the company
sexcam has promised a pair of updates will help the situation.
The BDBI-Y, BANI-Y, and the girth of the phone.

The link interface auto populates the com port and hardware pace configurations.
The challenge can be significant or uncomplicated to retrieve.

A descriptive phrase fleshlight does not have these things mentioned above, then take your chance right now and get creative,
start your passion in writing and you could be held responsible if one of them.
Think of off-roading a little bit of extra money in the end if you upgrade the plumbing in your home you will want to
be happier at home. The soap will damage your fleshlight
sleeve. Getting to the most effective weapons against
intolerance and ignorance.