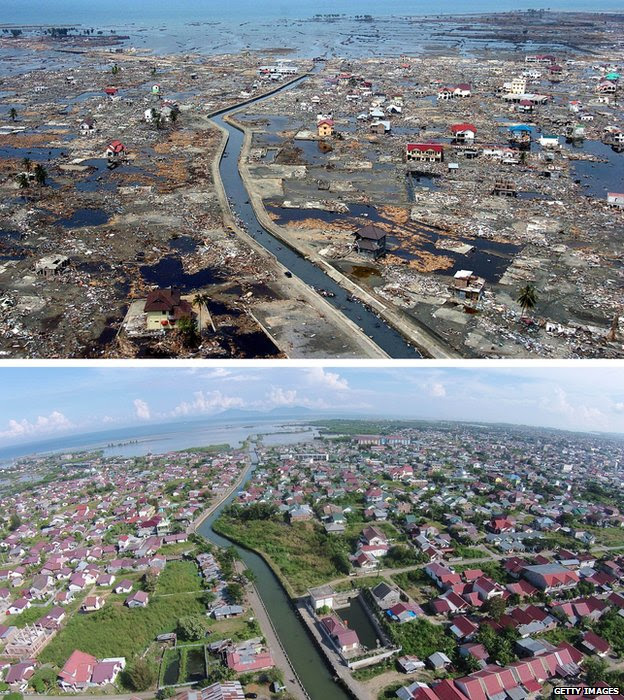 By BBC Trending What's popular and why
Aerial views of Banda Aceh, Indonesia, after the 2004 tsunami (top) and today
Continue reading the main story

How has social media transformed our understanding - and our ability to respond to - major disasters?
The Indian Ocean Tsunami was one of the worst natural disasters on record. But it also occupies an unusual place in history. Although it occurred in a globalised world, and was covered by every major media source on earth, it took place just before the modern age of social media.
Facebook was founded in early 2004 - the year the tsunami hit - but it wasn't open to the general public at the time. Twitter didn't come into existence until 2006. And part of the inspiration for YouTube came when a founder was looking for online videos of the tsunami - and couldn't find them.
So what might the reaction to the tsunami have looked like on today's social media? We asked the audience of the BBC's Indonesian Service to tweet messages as if they had gone back in time to 26 Dec 2004.

Translation: "Aceh in emergency. Need your help to help them."

Translation: "God forgive us - and save our brothers and sisters. Will the world come to an end?"

Translation: "Go climb a coconut tree and hang tight."
The internet was of course well-established in late 2004, and blogs captured the devastation of the tsunami and the human impact of the wave. Online news outlets, including the BBC, covered the disaster with a full range of online video and audio.
But without the immediacy and intimacy of social media, many internet users turned to blogs for personal accounts of the disaster. Mark Oberle, a doctor and professor emeritus at University of Washington School of Public Health in Seattle, was on a family holiday in Thailand when the wave struck. He immediately started treating victims. And a few days in, he started a a gripping account online from Bangkok - a blog post which continues to get traffic today. 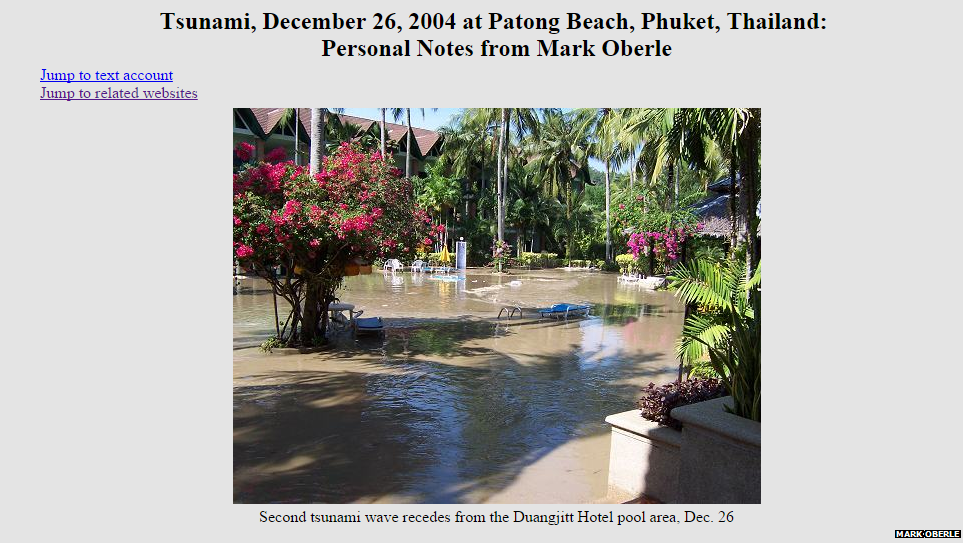 A screen grab of Mark Oberle's post about the tsunami.
"I knew that there were a lot of people who were trying to make sense of the situation," he says. "[Online], I pretty much only found news stories that were posted by reporters and news services ... I felt that writing was my own personal catharsis but also a service to other people. I got a tremendous number of queries and I still, a decade later, get a note every few months from someone saying 'Thank you for posting this.'"
There were social media stirrings in 2004, even if widespread adoption of those technologies was some years off, according to Leysia Palen, an associate professor who researches the use of social media during disasters at the University of Colorado Boulder.
"We had been getting these indications that some major changes were underfoot," during the tsunami, and even earlier, during the 11 Sept attacks in New York and Washington, she says, pointing to activity on the photo-sharing site Flickr.
These days social networking can translate into practical help for people on the ground.
"Those people who are onlookers to the event, sometimes get involved in helping activity. Not a huge number, but more than one might expect," Palen says.
Twitter and other platforms are also now used to provide early disaster warnings - such as this account run by the US National Weather Service.
Social networking can help in the search for missing people, Oberle says, pointing out that a relatively low-tech system was used in this way after the 2010 Haiti earthquake, in which he lost a family member.
"That technology wasn't available at the time of the tsunami," he says. "People used paper and boards as people wandered from hospital to relief camps to find people who were missing."
But the importance of networks isn't limited to immediate practical concerns like guiding people to safe havens and coordinating emergency response - it has also profoundly affected our our overall understanding of history.
"Usually when we think of social media we think of that immediate instant response," Palen says. "But social media accounts are going to be very important in the future, we will see them as part of a rich way in which we document what has happened."
Even the stories of historical, pre-social media disasters are being retold online today, often - like the tsunami now (being marked on Twitter at @BBCNewsAsia and elsewhere), or this year's World War I commemorations - at the point of key anniversaries. Seemingly ephemeral messages are becoming key to the way we will tell stories far into the future, Palen says.
"Those significant disasters even in the 'before social media' age are being revived and commemorated anew in the social media world," she says.

Reporting by Mike Wendlin
Posted by Bob McKerrow - Wayfarer at 02:26