Diary from the earthquake in West Sumatra.

The Red Cross relief operation in support of a huge number of people affected by the earthquake last week in West Sumatra is runing well. At 6.30 am a large convoy of PMI (Indonesian Red Cross) trucks with vital relief items left for the field. We have two helicopters flying today into remote mountainous regions not yet accessible by road. One is flying in medical teams dealing with the serious injuries and the other food. I don;t have time to write any more but I post a story below that my colleague Patrick Fuller wrote yesterday. Patrick is our communications guy based in KL.Patrick and I have worked in about five major disaster so we are close friends. 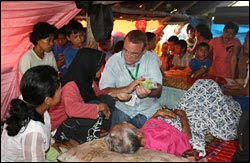 Finally, we arrived at our destination, a mobile clinic set up by a doctor and eight nurses who worked at the Indonesian Red Cross hospital in Bogor in Western Java. 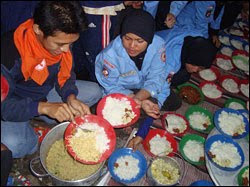 Volunteers of Indonesian Red Cross prepare meals for their colleagues who are working on evacuation process in Padang City. "It's hard to find any food shops open so we have lunch at a communal kitchen set up by the local authorities outside the local government office" "It is strictly no frills. Sitting cross-legged eating cold rice with a spicy sardine gravy with my right hand proves quite challenging". (photo by: Wayne Ulrich/International Federation)


Patrick Fuller of the International Federation of Red Cross and Red Crescent Societies travels to an open-air clinic in Pariaman district, which was close to the epicentre of Wednesday's deadly quake in Indonesia
Off to an 0530 start this morning, thanks to the heat and mosquitoes in my airless room.

It was a slightly fretful night as I was conscious of staying on the second floor of a large concrete structure, perhaps not the best option given the continued aftershocks.

I wanted to visit one of the health posts set up in Pariaman district, which was at the epicentre of the quake.

The road was choked with a bizarre array of organisations wanting to do good, from a squad of teenagers on mopeds with Dynasty Computers delivering boxes of noodles to the homeless, to members of the Singapore armed forces and the Indonesian 4x4 club.

Most people here live along the road and house after house had collapsed. We came across Hans Polak from the Swiss Red Cross, who is the team leader for Swiss Rescue, a 125-member team who flew in with 18 search and rescue dogs.

Hans sees shelter as the main need for the recovery programme. He had just visited a village in the area where every one of the 168 houses had collapsed but remarkably only 4 people had died.

But 80% of their wells had been destroyed, so providing clean water is a priority need that the Red Cross will be addressing.

It's hard to find any food shops open so we have lunch at a communal kitchen set up by the local authorities outside the local government office.

It is strictly no frills. Sitting cross-legged eating cold rice with a spicy sardine gravy with my right hand proves quite challenging.

Finally, we arrived at our destination, a mobile clinic set up by a doctor and eight nurses who worked at the Indonesian Red Cross hospital in Bogor in Western Java. The clinic was operating out of an open shelter next to a semi-collapsed house.

Dr Arfan and his team had been seeing an average of 50 patients a day, about 20% had injuries stemming from the earthquake.

Nur Asmi was lying on the makeshift examination bed, smiling at me while a nurse squeezed a massive blood clot from a huge gash in her head.

Having had her wound stitched up she calmly hopped on her bike and cycled home.

She had been cooking the family supper when the earthquake brought her roof down. A beam struck her just before she managed to escape. Amazing, that she and her five children survived.

The roof was sitting awkwardly on the ground concealing the rubble of the house underneath.

Like many of the children in these villages her kids had laid a small branch across the road to slow the traffic.

They stand in the road holding out cardboard boxes with a scrawled message saying "we are hungry" written on it.

No-one is actually going hungry, but the earthquake has disrupted food supplies arriving into local markets and people are making the most of the passing well-wishers, who drive through dispensing bottled water, biscuits and dried noodles.

Tomorrow we are setting up a mobile kitchen in the area, just so that people can manage during these difficult days.
Posted by Bob McKerrow - Wayfarer at 18:34

It has been heart wrenching to see countries like Indonesia who already had so many setbacks going to another trauma. Thank you for the amazing work Bob.

And I'll add my thanks to you and all the others working so hard to look after the people who've suffered so badly. Take care of yourself too, Bob.

Yes, the Indonesian people have had a hard time lately with disasters. Tks for your visit.

We have had a huge impact today with many medical teams out in the remote villages and lots of food and tents arrived also in large quantities. It;s the plugging away that wins the day.

It´s so terrible to see all the pics of the earthquake in Indonesia.You and all the other helpers and volunteer doing a great work there!Thank you!

Thanks foir the encouragment.

Indonesia is going through hard them .Thanks for sharing.Need to stand with them and help them.To deliver items or thing need good packaging.i experience one the best packaging company Click Here to see more.

this post is great.!I was greatly anxious about getting the product packaging. Then I came through with The Cosmetic Boxes UK. I skim through the site and felt to place my order on it. I placed and got my boxes. this experience was beyond my expectations. The material they used was long-lasting and the design was customer friendly. Above all, I got free delivery of them at my door. You can also place your order on this site, the method is very simple. I recommend to you!

Its amazing! A clean house is no less than a palace and a clean office invites positivity at the workplace. Entering your home or office, you wish to see everything neat and at its place. We at SKT Cleaning understand how important it is to maintain a clean and hygienic surrounding and hence to keep you healthy and happy, we get you the best of maid services in Dubai. We are the one of the most recommended cleaning services and Maid services in Dubai due to our dedicated services since two years.

Great Post! If you now about the most reasonable course of action will be to contact and hire an MSP (Managed Service Provider). iVersion Managed Hosting providers are your all-in-one packages to get started on the Internet.

There is no such thing as “quake season.” Earthquakes don’t care about the weather or time of day or anything else at all. Looking for packaging company, here is best custom boxes company in USA. Click here

Your work is just excellent. I reaaly love your work and thanks for sharing this. Custom boxes