Yesterday Tuesday 6 October, was a hectic day for all of us involved in this massive relief operation. I am now back in Jakarta for a few days working closely with my good friend Pak Iyang Sukandar,Secretary General of the Indonesian Red Cross (PMI). Pak Iyang is a veteran of of 30 years of disasters both man made and natural. A young boy surveys all that is left of his house. Photo: IFRC

Yesterday we spent a lot of time discussing increasing the number of families we will be providing relief material to from 5,000 to 20,000. We will also target 20, 000 families which is approximately 100,000 people for tents and for transitional shelters which will see them through the next year or two until petrmanent houses can be rebuilt. That means our Appeal for help will increase from about US$6 million to US$17 million. A big part of Pak Iyang's and my job now is to raise that money so it entails a lot of meetings, lobbeying, report writing and negotiations. Today I got valuable assistance from Peder Danmm from the Danish Red Cross, Jean-Philippe Tizi, Canadian Red Cross, and Naomi from the German Red Cross. The way my colleagues from other national Red Cross societies pitch in and help so selflessly is something I have come to treasure in this organisation. Wayne Ulrich, our head of operations in West Sumatra is hanging in there strongly. We must of had ten phone conversations today, the first one at 6 a.m. on getting a second helicopter for today. I managed to get Colin Tuck in from his oil rig duties today and to fly food in to remote villages. To give a field perspective, I quote from Patrick Fuller, my communications coordinator on the ground and in the air in West Sumatra,
Patrick ravelled to remote villages close to the epicentre of last week's deadly quake in Indonesia and tells his story.

A good nights sleep at last! I was so exhausted I was oblivious to the mosquitoes and the snoring of my room-mate. Into the office by 7.30 to catch up with Wayne, who is co-ordinating our operation. He's concerned that there are still many settlements higher up in the hills where no help has reached.

I'm hoping to go up in our helicopter later but the heavens seem to be conspiring against me; it's been pouring with rain all morning. Not great for the soaking wet volunteers outside who are trying to load tarpaulins and blankets onto waiting trucks.

The weather means I can catch up on some correspondence. In these situations it's easy to forget that there are countless people on the other side of the world who are involved in the operation. Our headquarters in Geneva launched an emergency appeal to support 30,000 families over the next six months with food, clean water and shelter.

“ Every house below us has been flattened and villagers wave, not in greeting but in desperation ”

This means I need to work at making sure that the disaster remains high on the media agenda. I think we have a couple of days before they lose interest.

I talk to Wayne about the possibility of getting some journalists up in the chopper to visit our medical team at work. We agree that the team can be dropped and the pilot will make a double trip. I call the BBC to see if they can go at short notice; they're happy to but it's still pouring outside.

At midday I get word that the medical team has left and we should get down to the landing pad. I just manage to wolf down more cold rice and an incinerated fish (or was it chicken..?) before dashing to the helipad. Alistair Leithead, the BBC correspondent arrives with his cameraman DC and we're quickly in the air.

All of a sudden a whole new world opens up. Seeing the disaster scene from the air really brings home the scale of the damage as we fly northwest.

We fly over an ancient lava field. Over thousands of years the rivers of lava had turned into verdant green ridges, now scarred with brown gashes where the hillsides have simply slipped down into the valley below.

It's here that the damage is worst. Every house below us has been flattened and villagers wave, not in greeting but in desperation. We land in a paddy field to find the clinic. I was convinced the rotor blades were going to hit a palm tree but John the pilot, a cool-headed Kiwi, could clearly land on a sixpence.

No-one had reached the village because of numerous landslides which had blocked the road ahead and behind. When we arrived the team had just finished stitching up a long wound down the back of a three-year-old child who had been lucky to survive.

Back in the air we fly over a valley which looks like a war zone - bare hillsides with huge trees lying scattered at the bottom of the valley. We land where a large group of villagers are waving beneath us.

As they crowd around us, my colleague Hari from the Indonesian Red Cross asks them what help they need most.

As one they shout - 'RICE'. Their stocks have run out and they can't get out to the nearest town two hours away to buy more. The scene is interrupted by a comic-surreal moment as a dog-fight suddenly breaks out and Alastair goes flying in the melee.

Once we land back in Padang it's straight back to the office for a co-ordination meeting. A logistics Emergency Response Unit from the British Red Cross have arrived. Their job is to handle all the relief goods arriving by air and sea.

I recognise a couple of them - Jamie and Peter, veterans of countless disaster operations. We count the years since we last met. Despite the fact that we always meet in the worst places it's reassuring to know that the relief supplies are in good hands and will be quickly despatched to the field.

It's almost midnight, but I still have to share some photos I took from the helicopter with Reuters. Maybe tomorrow will be less hectic… somehow I doubt it. 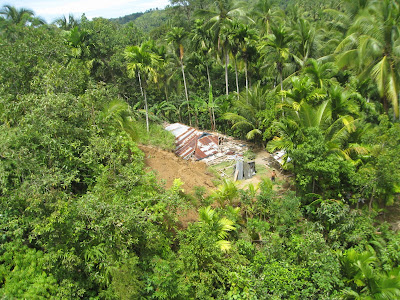 "All of a sudden a whole new world opens up. Seeing the disaster scene from the air really brings home the scale of the damage as we fly northwest".
Photo: Bob McKerrow