Nine days after the earthquake in Sumatra 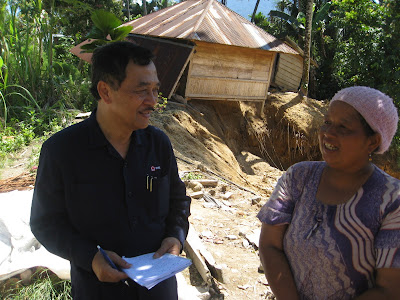 When I woke up Thursday morning, 8 October, I remembered it was four years ago that the huge earthquake struck near the border of Kashmir and killed 80,000 people in Pakistan and some thousands in India, I will never forget the smell of death, mainly from decomposing bodies that seeped into my clothes and skin and remained with me for days after. Coincidentally I am flying in to Padang with Vincent Nicod, Head of the ICRC in Indonesia, who worked with me throughout the Pakistan earthquake. On Thursday night coming home from a restaurant, I passed the hotel where diggers were dismantling the building in front of hundreds of grieving relatives hoping the bodies of their loved ones will be found. Some wildly hoped their child of relative will be brought out alive.

As I walked past the hotel, the evening breeze carried the smell of death and evoked sad memories of earthquakes I have worked in Afghanistan, Tonga, New Zealand, Tajikistan, Krygyztsta, India. Sri Lanka, Maldives, Uzbekistan and Pakistan on relief and recovery operations, and each has its own lasting characteristics. The West Sumatra quake is different for its high destruction and low death rate. Why that has happened, I am still at a loss to explain but perhaps it is the preparedness done since the last big quake here two years ago. 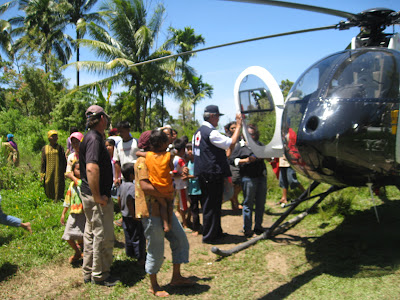 Curious villagers in Selegan Tinqqi, the last village that had not had contact with the outside world, throng around the helicopter. Photo: Bob McKerrow
I’ve been on the road for two days and have seen over fifty thousand severely damaged houses, hospitals, schools, hotels and buildings. The scarred landscape is strewn with rubble and the crumpled buildings look as if they have been scattered by the hand of a destructive giant. On Thursday I travelled by road with Irman and Rukman from the Indonesian Red Cross (PMI) and yesterday I went by helicopter to badly affected mountainous regions. 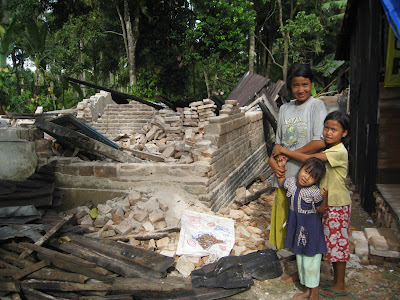 A woman and her children show us what is left of her house. Photo: Bob McKerrow
My heart bleeds for those stoic survivors. What dignity they show. Yesterday when we flew into Selegan Tinqqi, the last village that had not had contact with the outside world, the people were surviving on fruit and vegetables. Their request was for ‘rice and chillies.” Here 300 people live. Only five people died but virtually every house is flattened. But their quiet dignity and orderliness was impressive. Two hundred people thronged around the chopper, but showed no demands or anger towards a world that had forgotten them. They were grateful and gave us gifts of coconuts. Pak Iyang the Secretary General of the PMI lifted a young girl up and let her play ‘in the bird that dropped out of the sky.’ We spent 45 minutes here preparing a heli pad for the large US Navy helicopters to land with bulk supplies in the coming days. At least 1,000 landslide spots in the Gunung Tigo highlands, where we spent 4 hours surveying yesterday, is located between Padang Pariaman and Agam districts. In at least three locations large scale landslides occurred destroying entire villages and agricultural land. 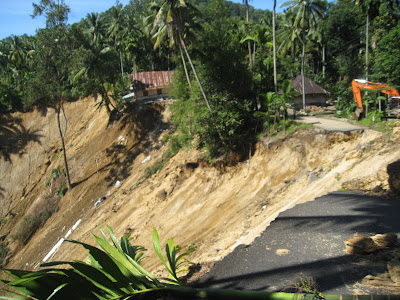 The mountain top village of Ambroang Gadang. The road slipped away and the village is cut off. Photo: Bob McKerrow

The worst site I visited was a mountain top village of Ambroang Gadang where a huge land slide carried away ten houses killing over 50 people. While I was there Government rescue teams recovered two more dead. I spent considerable time there with Pak Iyang, Pak Irman and Ebu Asweeth from PMI discussing needs and preparing another helipad for the big airlift starting tomorrow. My colleagues in the PMI are [providing exceptional leadership and take every opportunity to get out and innspire the 400 plus volunteers who are working round the clock. 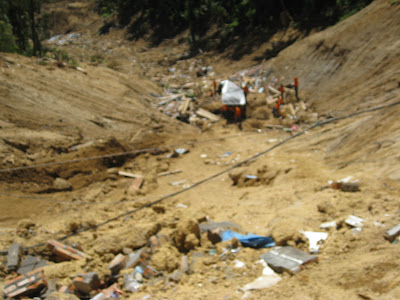 Rescue workers toil away recovering bodies from the village of Ambroang Gadang that was buried by a land slide. Photo: Bob McKerrow

One of the best writersa in this earthquake is Thin Lei Win from Reuters Alert Net who gives her onservations:
I visited a remote village called Sungai Puar Tanjong Mutus in Pariaman District with the Red Cross on Monday. The road was not accessible the day before due to landslides.

Nestled among coconut trees, vegetation and paddy fields, the road to Sungai Puar Tanjong Mutus winds its way along numerous small villages, and there was destruction on both sides. 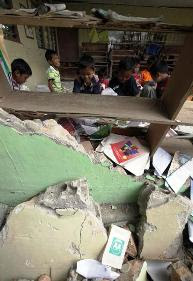 Indonesian students collect their books at their school on Oct 6, 2009 after it was damaged during an earthquake in Padang, West Sumatra. Photo: Reuters

One house was nothing but a pile of rubber, with bright coloured clothes in little bundles atop broken piles of wood and bricks. Landslides and earthquakes have left some places with fallen coconut trees, snapped power lines and flattened houses.

Then we got to the village, rather, to the road leading to the village. Landslides meant we had to walk through soft mud to what must have been a picturesque village surrounded by hills on one side and lush rice fields on the other.

Heavy machinery was at work, brought in not more than an hour ago, to clear an area where a house stood just a few days ago. The earthquake and subsequent landslide had buried the house and three family members - parents and their 17-year-old son.

People sat in front of their ruined houses - apparently almost all of the 150 houses were damaged - and under makeshift shelters watching the proceedings with a grim but matter-of-fact eye. Kids being kids, they were interested in the foreigners with gadgets and a gaggle of them followed us wherever we went.

There was also a young volunteer with Red Cross. He's 18 and he couldn't express his emotion and sorrow of the boy almost his age buried somewhere deep under the mud.

Soon after, the villagers got into the act, using shovels to get the dig while the machine moved to another area.

I left thinking of the boy in the mud and the boy outside waiting to evacuate his body. And of the grieving father who saw his two children swept away, the family at Cubadak Air village who were living under pieces of borrowed and ripped tarpaulin and the smiling Wati at Padang Karambia village whose attendance at a neighbour's wedding saved her life.

And of the villagers, who, despite living in one of the world's quake-prone areas and suffering a devastating disaster, remained cheerful and friendly. In every place we went, they offered us food, shared their stories and welcomed us with open arms.

This quake may not be as big as the one in Yogyakarta three and a half years ago or generate a tsunami in Indian Ocean like five years ago, but the loss and impact is no less painful. And it affects the rescuers, the rescued and the witnesses.

The relief operation will be scaled up in the coming days as more cargo flights arrive in Padang and a clearer picture of the situation appears through more comprehensive assessments. A USAID flight arrived in Padang with 45 tons of cargo last night and they have given it all to us. The PMI is currently distributing whatever relief stocks they have in Padang and family kits donated by AusAid.

Discussions are under way with the USS Denver from the United States Pacific Fleet to use their helicopters to airlift vital relief supplies to the communities affected in the three critical areas of V Koto KP Dalam, V Koto Timur and Sungai Geringging in Padang Pariaman who have received little or no relief aid so far due to their remoteness and inaccessibility. The three critical areas will be the focus of PMI’s airlift relief efforts over the next few days. Once the distribution plan is confirmed, the airlifts are expected to begin on 10 October. The USS Denver will also be assisting the Government of Indonesia as well as other NGOs who may need similar assistance.

An immediate challenge will be to get affected families into temporary shelters as soon as possible as part of the recovery process. Some villagers, unable or frightened to stay in their damaged homes, are living under plastic tarpaulins in front of their houses.

It is clear that the relief effort is largely being spear-headed by Red Cross, local NGOs, companies, religious organisations and individual well-wishers. Civil society plays an important and largely unrecognised role in filling the hunger gap in the first few days after any emergency.


The only problem was waiting half the day for the tide to come in so that the ship could rise high enough in the dock to be off-loaded. 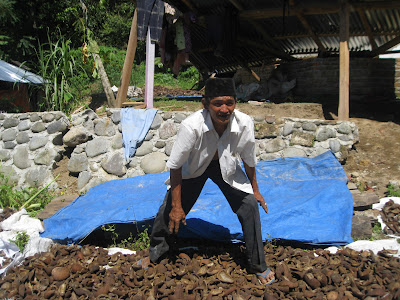 The Turkish Red Crescent are supporting the work of the MI in a village called Sikupa. It was chosen largely because no-one had been to help the 1,500 families that live there. Eighty per cent of the houses in the village had collapsed and about 20 families were camped out at the local mosque.

All the children of the village gathered with their mothers at the mosque and what followed was two hours of pure fun and laughter. The Red Cross team launched into a riotous puppet show that was interspersed with "follow the leader exercises". Punching the air stamping the ground and shouting the house down is a simple but effective way to help the children to let off steam.

The volunteers were giving special attention to some of the children in the audience. Widya Wiranti is a primary school teacher. Her school collapsed in the earthquake so she joined the Red Cross and now spends her time working with the PSP team. 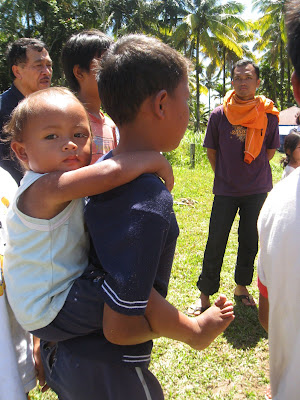 She is a natural with children and is focusing on a little boy called Abi who is clearly suffering trauma. He clings to his mother as Wiranti goes into a role-play and gently coaxes him towards a picture book.

Abi's mother, Nelda, explains that he cries a lot and cannot sleep. Wiranti reassures her that this is normal behaviour after such as a traumatic event and encourages her to show him plenty of love and affection to help him cope.

It transpires that Abi's story has a bizarre twist. Exactly a week before the disaster he had a premonition that an earthquake was going to strike. His sixth sense predicted everything that subsequently happened with uncanny precision.

Abi with his Mum. Photo: Patrick Fuller
More good news. I learn that the Red Cross has now distributed relief supplies to 2,200 families, that is over 10,000 people.

Thanks to Patrick Fuller for support on this. I have gotta go. I hope this updates you on the complexities of a large relief operation

Kia ora Bob,
Your updates and the words of your fellow hero's are stirring stuff. It is hard for us to imagine here what this would be like, though we indeed live in a volatile place ourselves. I hope diginity would be a trait used here as well. How are your knees treating you? Clearing helicopter pads and such would mean a fair bit of hard activity so I hope you are feeling like that 25 year old mountaineer with a sparkle in his eye. Kia kaha Bob. May you be back in the bosom of your wife and boys soon.
Cheers,
Robb

I heard Wellington had a shake yesterday so the "old Ring Of Fire" is active. Yes, the dignity of the people amaze me. Such relience. Tks for your words of encouragement. The knees are fine.

Very good info. Lucky me I discovered your site by chance (stumbleupon).
I have book marked it for later!