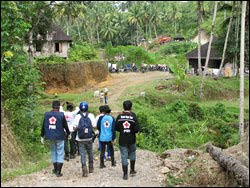 It's 6 a.m. on Monday morning. The big airlift is about to start. Yesterday we dropped Indonesian Red Cross (PMI) volunteers into remote mountainous villages in West Sumatra. It is a place where Sumatran tigers prowl with freedom. I have just been talking to Wayne Ulrich our ops manager. He says volunteers working alongside US Navy personnel are currently loading seven helicopters: Pumas, Black Hawks and Stallions. The Red Cross has been given priority by the US Navy. This will save us heaps of money as they are doing it free. We will be getting out noodles, hi-protein biscuits, tarpaulins, tents, family kits, hygiene kits, blankets and clothes.
I will keep you posted on this air lift. Meanwhile our 6 water purification units are pumping out 700,000 litres of clean water daily, the blood bank continues to give blood to hospital, the psychological counselling teams are moving through villages with puppet shows to help children cope with grief and stress, and medical teams are providing health services throughout the area.

Pak Irman from the PMI and Wayne Ulrich are doing a fantastic job and seem to survive easily on 4 hours sleep a night. these guys are pros and have collectively seen more disasters than many of you have had hot dinners.Searching for loved ones
I will keep you posted

Searching for loved ones
My colleagues Kathy Mueller, Canadian Red Cross, in Padang , wrote this really good story I would like to share:
They grab their gear - dark blue vests indicating they are volunteers for the Indonesian Red Cross (PMI), face masks and long, pink rubber gloves to protect them from the scene they are about to enter. Theirs is not an easy job. They are part of the search and rescue teams, mobilized several times a day to try to find victims of last week’s earthquakes.

“It’s very rewarding and fulfilling to be part of this,” says one team member. “When we pull someone alive from the debris we are all very happy. We know we are making many families very happy.”

On this day, the team heads back to the site of a collapsed three-storey office building in the city of Padang. Dozens of people gather around, silently watching the very delicate excavation work. They’re looking for a woman, known to be buried among the rubble. 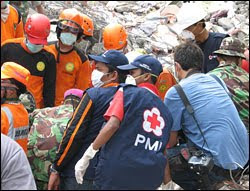 They grab their gear - dark blue vests indicating they are volunteers for the Indonesian Red Cross (PMI), face masks and long, pink rubber gloves to protect them from the scene they are about to enter. Theirs is not an easy job

The big claw of the excavator rips away large pieces of debris, when rescue crews suddenly yell “stop”. They had found her, a young woman believed to be in her mid-20’s. Digging with their hands and small shovels, rescue crews - including volunteers from PMI - gently remove this earthquake victim and return her to her family.

She is one of 28 people pulled from the wreckage at this site alone.

Yopi Rizki knew he had to do something to help after surviving the quake. The 18-year-old from an area north of Padang, a region where the destruction is particularly bad. Those who have beds have moved them outside, seeking shelter under leaky tents and plastic sheets. Landslides have made some villages inaccessible. Massive fissures in the road show where the earth has literally been ripped apart. 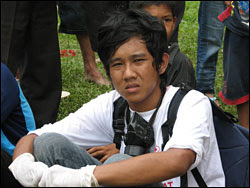 Yopi Rizki knew he had to do something to help after surviving the quake. The 18-year-old from an area north of Padang, a region where the destruction is particularly bad.

So Yopi became a member of the search and rescue/recovery team, and we join him on his fifth evacuation. It’s to a small rural village that until a day earlier had been blocked off by a massive landslide. One house remains completely buried. Inside is a family of three - mother, father, and their 17-year-old son.

Yopi sits on the side of a hill, wearing a face mask, and watching as an excavator claws its way through the dirt. When asked to reflect on the fact that a boy very close to his age lies buried just metres away from where he now sits, Yopi chokes up. It’s a subject he says he just cannot discuss; it hits too close to home.

But it’s precisely because it hit so close to home that Yopi chose to join this team.

“I feel it inside my heart,” he says, quietly. “Yes, I am scared to see the victims. It makes me sad. But I know I am helping people and that makes me happy.”

With the recovery phase of the relief effort now switching to reconstruction, this team will not be as busy in the coming days. But Yopi says he will stay involved with the International Red Cross and Red Crescent Movement.

This was the largest earthquake of his young life. He knows he will experience more. He wants to be better prepared to help both before and after a disaster. And he knows the Indonesian Red Cross can help him get there.
Posted by Bob McKerrow - Wayfarer at 15:36

Whew Bob, strong stuff to read. Thanks for taking the time to post it all. It really brings home how we're all flowers in the same garden, and that this fact must never be forgotten.

Keep up the good work and more power to you.

Tep, we are all flowers in the same garden, but some of us live in marginalised plots.

Thanks for dropping by and giving encouragement.

I'm really enjoying the design and layout of your website.
It's a very easy on the eyes which makes it much more pleasant for
me to come here and visit more often. Did you hire out a developer to
create your theme? Fantastic work!

Take a look at my blog: green coffee weight loss