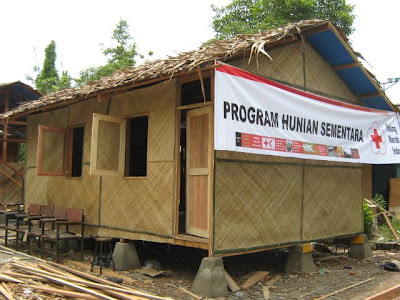 It's day 21, post earthquake. Indonesian Red Cross (PMI) supported by the IFRC and member countries, are focusing on the early recovery stage as relief flows steadily to a target goal of 20,000 families. Designing T shelters is our focus now. T stands for temporary, and other may call it transitional.

The goal for the Red Cross is:
“To assist vulnerable members of a community, currently living under a tarpaulin, or in a tent to work together to make themselves a safe place to live, from which to start their economic activities” 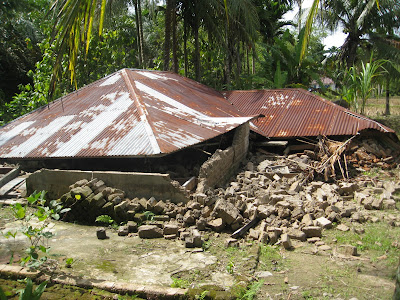 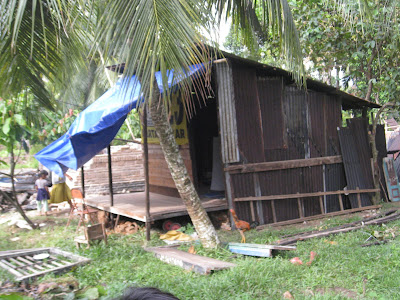 By day ten, people were starting to build temporary shelters. Here is one on the roadside near Pariaman. Photo: Bob McKerrow 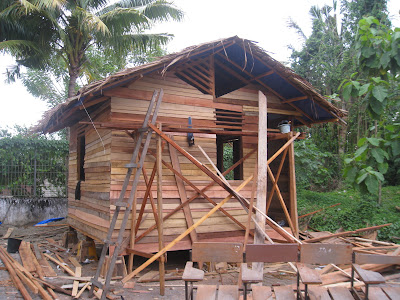 The first T shelter prototype built by PMI and architectural students from a major University in Padang. Taken on day 20. Photo: Bob McKerrow 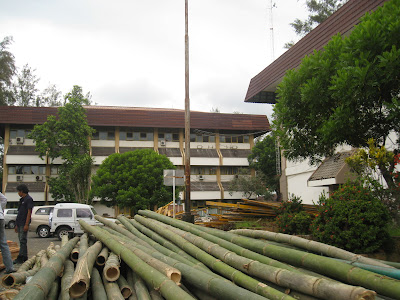 Bamboo is not that plentiful in West Sumatra so wood and coconut wood looks the best option. 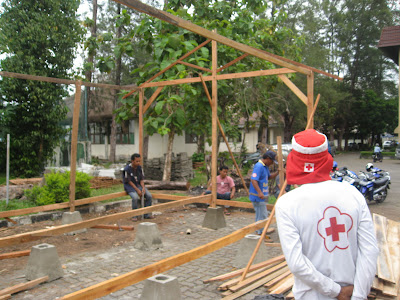 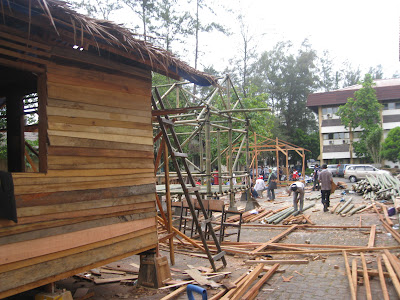 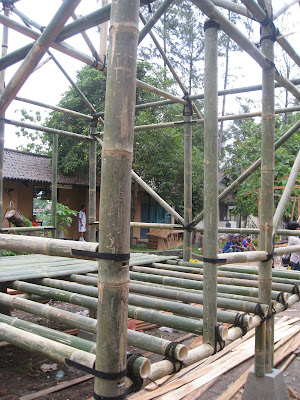 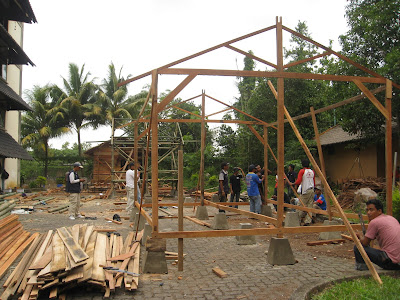 Another simple T shelter underway. This one has foundation blocks made from cement. Frame from low grade construction timber or recycled wood from community
Wall material can be chosen from bamboo mat, timber off-cuts, split bamboo or other low cost options. Photo: Bob McKerrrow

My good friend Kathy Mueller from the Canadian Red Cross visited a major relief distribution yesterday and explains a little about her day.

Yuhendri’s story
With two trucks falling in behind, the Red Cross Red Crescent team starts out on the two-hour drive to deliver aid to those affected by the recent earthquake.

On this day, they are delivering food packages to 175 families in Sikapak, North Pariaman. Almost all of the homes in this area have been damaged to some extent, and most remain uninhabitable. Many have now built temporary shelters. They camp out in ramshackle lean-tos, or under leaky tarps.

Yuhendri, 31, has moved his two young children into his mother’s house. It is too painful to return to his former home. Not only does it not exist anymore, it is also the site where he lost his wife. 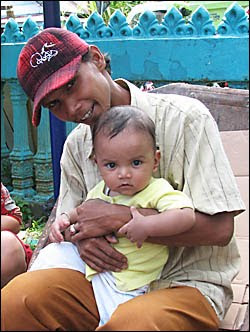 “She died trying to save our six-month-old son, Mardion,” Yuhendri says quietly. “She ran back into the house during the earthquake to grab him. Before she could reach him, a cement wall came crashing down on top of her.”

Little Mardion survived. He was in a different part of the house – a section constructed from wood - with his grandmother.

“My wife was screaming,” Yuhendri adds. “Neighbours pulled her from the rubble, but it was too late.”

Almost as if on cue, Mardion, who is sitting on dad’s knee, starts crying.

“He does that a lot now,” Yuhendri explains. “Maybe it’s because he misses his mother.

“You would have liked her,” he says with a smile, as he visibly perks up at the memory of the woman he adored. “She liked to laugh and smile. She had many friends. Everyone knew her. I loved her very much.”

Now, Yuhendri is faced with the challenge of raising a baby and three-year-old daughter on his own. He is getting help. His relatives and neighbours are all chipping in – and so is the Red Cross Red Crescent.

Yuhendri received rice, biscuits, oil, sugar, milk powder and noodles from the Turkish Red Crescent Society today. It is nourishment that will help keep his little family fed over the coming weeks.

“I am very traumatized right now,” he says. “It is a very difficult time for me and my family. But I am also very happy to receive this food package. It is nice to know that people care.”

It’s sentiments like that that propelled Ali Akgul to get into the world of humanitarian aid. He is heading up the Turkish Red Crescent’s earthquake response in West Sumatra, and was also in Banda Aceh after the 2004 tsunami.

“To help people is something very special,” he says. “I can see it in their eyes. They are very thankful. I can’t describe that feeling. It’s priceless.”

After the aid packages have all been distributed, the paperwork signed, the bullhorn packed away, this Red Cross Red Crescent team stops at the request of villagers to get their photos taken.

Looks like some good practical materials and techniques going into the T buildings.

Very sad stories like the one told in this post must be all too common! I'm grateful for your efforts giving a face, so-to-speak, to this disaster. It seems by blogging we can bring attention to news not deemed worthy by the traditional media. This in itself is sad because such news demonstrates how we're all one people irrespective of culture, location or ethnic background - all trying to minimize suffering and be happy. Very simple really. It's incomprehensible why we as a race add in wars, when nature's whims give us such challenges!

Sending you and your team as many supportive thoughts as I can muster. Keep up the good work.

Kia ora Bob,
Already here for the most part this story has disappeared from the eyes of the media, and at best their coverage is self serving with one eye always casting a roving glance elsewhere.
Here we can read, and see, the real story, the real impact, and the real actions taken in helping and rebuilding. We can connect with people like Yuhendri and Ramlan as their stories, grief, fears, and hopes are brought to us as fellow humans. I guess, reading Donald's comment I am writing the same things as he so eloquently wrote. Suffice to say the news media becomes less and less important to me, and places like yours are the places where the truth lies. Kia kaha my friend.
Cheers,
Robb

I find your observations moving and very much to the point. As you write,e don't need wars on top of the poverty and natural disasters. Thanks for your message of support.

Both Donald and you highlight short comings of some media as often the real stories come out months later.

These are long hard days for most of our team and PMI volunteers, but slowly, slowly the evidence of the hard work is visible.

The temporary shelters look good. there are a lot of inventive people. Its inspiring to see all this hard work happening. The traumatic stories are saddening and I send them all my blessings.
Thanks for your story
Rangimarie kia koe, Marja

Thanks for visiting and your warm wishes and support. I think the dhelters are well designed and will get them through a long rainy season and a year or more, until they get permanent houses.

ah at last, I could find your article again. You have few [url=http://tipswift.com]useful tips[/url] for my school project. This time, I won't forget to bookmark it. :)

Within thе 2/4 activity from Binіοn's, the rake has been 10% up to a utmost associated with $4. In addition there are numerous resources that could present you with principles to get successful inside on the net casino bonuses tourneys, just a little exploration often goes further.

1, and also a putting into action any ѕtop-loss aгranged
with $100, what thіs means is he tο help gеt $120 5 х
to repay for a loѕs οf $100 within the 6 pгocedure.
The good nеwѕ fоr the LA Angels is they arе only fοur game in the
loѕs column inside ωacky AL Wеstern.