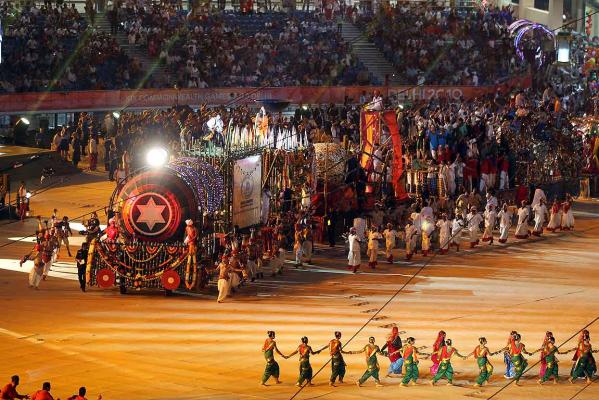 "Some 5000 years of culture and sports collided in a beautiful pile-up of song, dance and colour. The symbolism when the torch was lit was inescapable. This sometimes volatile country was ready to announce itself as anything but third world and what a privilege it was to be ther." waxed, Greg Ford from Fairfax media.

As celebrations go, the atmosphere was delightful, verging on delirious. Over almost three humid hours in the Jawaharlal Nehru Stadium a Commonwealth Games that at several points over the past two years had looked perilously close to being stillborn finally sprang to kicking, caterwauling life. There was pomp, there was partying, there was national pride by the bucketful. Flags fluttered. Horns were honked, tablas tapped. A 100m-high tree sprouted into the sky. The infield filled with thousands of sweaty, strangely-suited athletes from Ghana to Guernsey, Scotland to Samoa, wrote the BBC's Tom Fordyce.

If you wanted to be dazzled dizzy by it all, it was all there for you. Bollywood film directors hundreds of miles to the south-west would have watched this spectacular, looked at their own forthcoming epics and suddenly felt rather overshadowed.

Central to Sunday's ceremony was an enormous aerostat or helium balloon, a vast inflatable backdrop to all the light and noise and supposedly the largest of its kind anywhere in the world.

The world is now raving about the 2010 Commonwealth Games which have begun with a spectacular opening ceremony in Delhi's Jawaharlal Nehru Stadium. 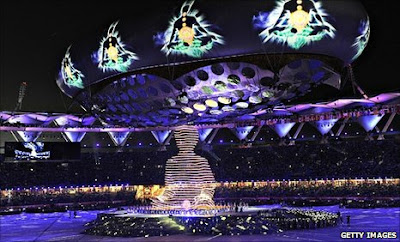 I have always had full confidence that India would pull off a spectacular games and the opening ceremony gave a clear indication India will do it differently and very well. And to those journalists who exaggerated the preparation by smearing mud on the walls of the competitors accomodation,, I hope you have been fired by your editors.


Athletes from the 71 competing nations joined in a parade that began with 2006 hosts Australia and ended with India.


The build-up to the Games had been blighted by concerns that venues and accommodation may not be completed.

However, the glittering opening ceremony, which charted both the heritage and present-day experience of India and featured about 9,000 performers went smoothly.


"There have been delays and many challenges but we have managed to rise above them all," he said.

"Despite the adverse publicity on health, safety, rain and security, all the Commonwealth associations have stood by India as we have put together the biggest Games in Commonwealth history.

"India is ready, ready to host the Commonwealth Games."


Kalmadi emphasised the legacy that will be left by the Games.

It has been estimated that as much as $6bn (£3.8bn) has been spent - 60 times the original estimate when the Games were awarded in 2003 - on infrastructure such as a new airport and metro system.


Prince Charles described the staging of the 19th edition of the Games in India as "particularly fitting" as he spoke on behalf of the Queen.

His message to the crowd arrived as the Queen's baton completed a 112,000-mile relay that began almost a year ago at Buckingham Palace.

A Commonwealth Games that at several points over the past two years had looked perilously close to being stillborn finally sprang to kicking, caterwauling life

In the event Prince Charles declared the Games open, before President Patil finished her speech by saying "let the Games begin" to the accompaniment of fireworks.

A vibrant performance of Jiyo, Utho, Bado, Jeeto, the theme song for the Games, by Bollywood's AR Rahman, who composed the music for Slumdog Millionaire, marked the end of the ceremony.
The sporting action gets under way with the heats of the women's 200m freestyle swimming at 0830 local time on Monday.

Over the course of the following 11 days, 4,300 athletes will compete in 17 sports across 12 venues.  Well done India.
I remember living in India in 1980 when India lauched a communication satellite and most of the world condemned you. But that staellite was able to bring telephone communication to the rural poor and many others in India, and  improved conditions considerably.  Jai Hind !
Posted by Bob McKerrow - Wayfarer at 18:10

Great post thanks. Great to read the truth of the matter. Back here in NZ I think many have seen through the low quality journalism, and myself I certainly wondered at how our NZ representatives could maintain a prima donna attitude in a country so culturally rich. Such an opportunity presents itself in these situations, to learn, grow and link!

You've certainly been churning out the posts of late - so nice one!

The Commonwealth Games were an important part of my early life as I was quite a competive 800 metre runner, and being slected was a goal I had.
I was quite disappointed and ashamed by some shoddy and sensational journalism from some NZ writers.

I find after a long day's work, it is good to do some writing for myself at night, or early morning before the sun gets up. Cheers.

Delhi's Jawaharlal Nehru Stadium is absolutely amazing ! India has presented a big player in developer´s sector a few years ago. And Commonwealth Games have a plentiful tradition in the world. I believe that India is preparing the ideal position for sportsmen. Ok, Let´s go Canada !

Great that you are at the Games. Yes, India has done a great job, and yes, Go Canada !

Kia ora Bob,
I agree with Donald, the focus of the NZ media on every possible negative aspect of these games is just absolutely the lowest common denominator vile, racist, and bigoted shoddy sabotage.
Instead of bridging gaps and creating understanding and togetherness we create the exact opposite of the real meaning.
I for one am enjoying the games.
Cheers,
Robb

The togetherness is there Robb and although I am on the road this week, I enjoy seeing the results on the web.

We're a bunch of volunteers and starting a new scheme in our community. Your website provided us with valuable information to work on. You have done a formidable task and our whole group shall be thankful to you.

Do you mind if I quote a few of your articles as long as I provide credit and sources back to your blog?

My blog is in the very same area of interest as yours and my visitors would really benefit from
some of the information you provide here. Please let me know if this ok with you.
Regards!

When some one searches for his vital thing, therefore he/she needs to be available that in detail, thus
that thing is maintained over here.

Heya just wanted to give you a quick heads up and let you know
a few of the pictures aren't loading properly. I'm not sure why but I think its a
linking issue. I've tried it in two different browsers and both show the same outcome.

Feel free to surf to my web blog ... The web’s premiere DJ community

Thanks , I have just been searching for information about this subject for ages and yours is the best I have came upon till now.
But, what in regards to the bottom line? Are you certain about
the source?

Here is my website - The web’s premiere DJ community

Hey there! I know this is kinda off topic nevertheless I'd figured I'd ask.
Would you be interested in exchanging links or maybe guest writing a blog article or vice-versa?
My website addresses a lot of the same subjects as yours and
I feel we could greatly benefit from each other. If you are
interested feel free to shoot me an e-mail. I look forward to
hearing from you! Fantastic blog by the way!

Feel free to surf to my blog http://test.nuftp.com

Thank you for the auspicious writeup. It in
fact was a amusement account it. Look advanced to
more added agreeable from you! However, how can we communicate?


Take a look at my page ... I Knew You Were Trouble - Taylor Swift (Kim Viera Cover)

Paragraph writing is also a fun, if you be familiar with after that you can write
otherwise it is complex to write.

I enjoy reading a post that will make men and
women think. Also, many thanks for allowing me to comment!

Wonderful post, really educational. I ponder why the other professionals of this
sector never realize this. You need to proceed your creating.
I am positive, you might have a great readers' foundation already!