Books have been the only constant thing in my life over the past thirty years as I have travelled and worked in most remote corners of Asia. from the Pamir mountains of Tajikistan, to the deserts of Turkmenistan, from the islands  of Sulawesi to Laamu Island in the Maldives .........

Usually at the end of a three to six year assignment, I pack my books into a container, and ship them on to the next assisgnment. Normally I find some hand-me-down book shelves to display my books on or buy some cheap ones. This time I promised my well worn and well travelled books, " you are going to have the best book shelf I can get made in Colombo." And they got it. 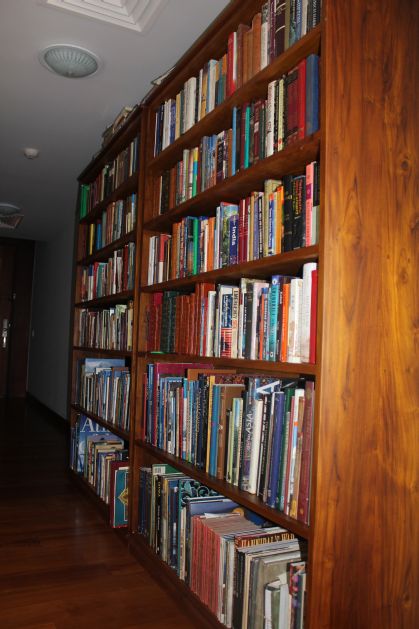 So now my 600 plus books proudly stand on a new teak wood, made  by a master craftsman who took two months to locate trhe best timber, to season it, assemble it, and to give it many layers of a matt finish 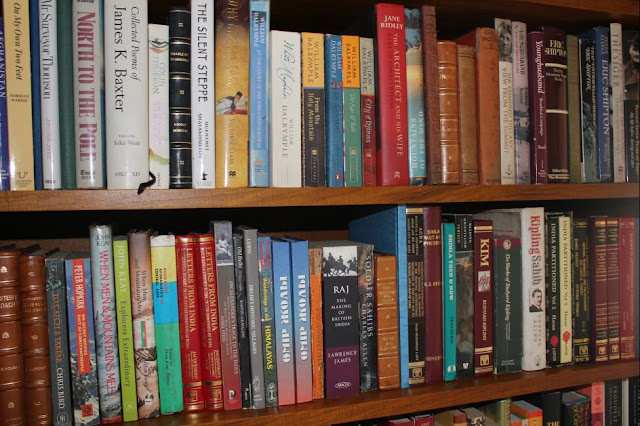 A look at one corner of the bookshelf which contains a hotchpotch of titles. 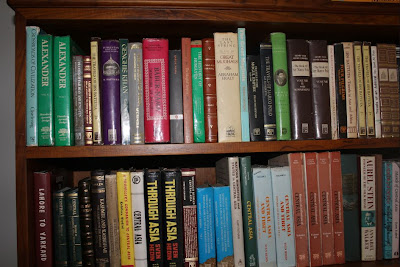 The most well worn book is my favourite, " When Men and Mountains Meet - the Exploration of the Western Himalayas which I purchased in a small bookshop in Madras in 1980. I could either entertain you for hours, or possibly bore you for hours, as to where many of these books were found, purchased or bartered. Bazaars and booksellers in Peshawar, Kabul, Herat, Kathmandu, Meshad, Samarkand, Kashgar, Kangra, Ashgabad, Simla,  Dushanbe, Merv, Bukhara, Turkistan, Almaty. Bishkek, Khorog, Kandahar, Lahore, Osh, Pokhara, Manali, Kaza,  Dharamsala, Chamba, Dalhousie,Darjeeling, Balkh, Dhaka, Delhi, Jakarta, Male, Calcutta, Bombay, Saigon, Pleiku, Manila - have all yeilded to this collection.

Any rare or priceless books I have put into instutions or safe private collections for safe keeping and wider accessability, for example:  http://bobmckerrow.blogspot.com/2010/07/home-for-very-rare-book-herman-buhl.html  a place where I deposited one of the many rare books I have parted with.

And which is the most well worn, the most refered to book in the collection  ?

WHERE MEN AND MOUNTAIN MEET BY JOHN KEAY.  I have three copies of it, two dog-eared copies that have been up more valleys, more mountains, more passes than many mountaineers. It has been my constant guide since I discovered it in a small bookshop in Madras in 1980. Since then I have tried to visit ever river, every valley, every pass listed on   the maps in the book. See article I wrote on this: http://bobmckerrow.blogspot.com/2008/06/having-now-visited-all-places-mentioned.html 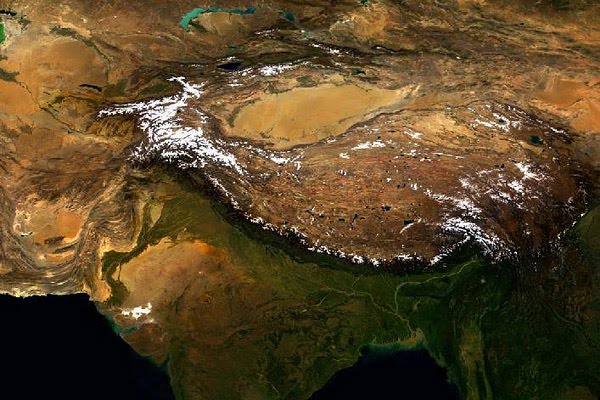 John Keay's book is concerned with the Western end of  the Himalya  so well illustratet in this NASA satellite picture. 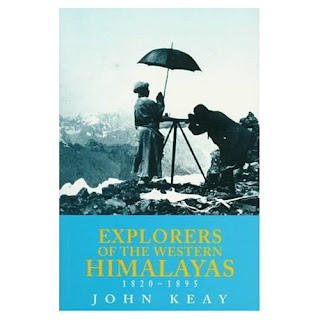 Keay's book  is the tale of the exploration and opening up of the Himalayas. Woven though it is the ebb and flow of The Great Game in which Britain and Russia competed for control of the northern passes into India. John Keay brings out the personalities of the explorers, from the immensely tough and intelligent William Moorcroft to the wilful Francis Younghusband who ran a war with Tibet more or less on his own initiative. What one constantly admires is the determination and resilience of these characters. They battle against difficult terrain, terrible weather and often hostile locals.


So now I have my book collection housed in a natural home, and I think of all the year's of reading ahead.

Kia ora Bob,
What a great case! Well done. I am sure those books are quite content in their new home. I could spend hours I am sure browsing your fine collection. Hope you are enjoying the weekend.
Cheers,
Robb

Yes, the books and I am happy. I am about to take the boys to play cricket at the famous Moores cricket ground to join a club. Take care. Bob

book shelves are my favourite item of interior decor. I'd rather have a wall of books to look at than just about anything. I reckon your shelves would satisy hours of browsing...

I agree with you that well made bookshelves with fine books, are better than just about anything. But then, maybe we are rare types, as many homes I go into have no books on display, or hidden away. Thanks for your comments.

Hi there,I enjoy reading through your article post, I wanted to write a little comment to support you and wish you a good continuationAll the best for all your blogging efforts.
Regard: