The Commonwaelth Games in New Delhi are over ! Reflections. 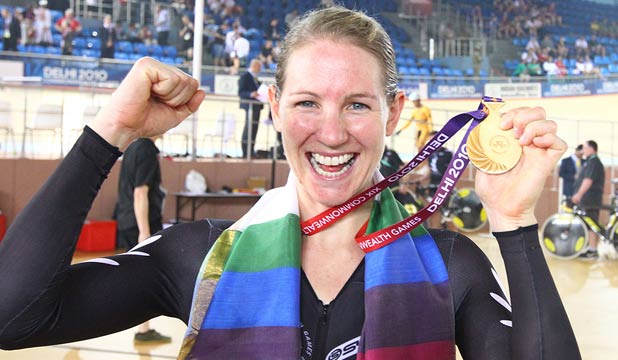 I am watching the remarkable closing ceremony at the Commonwealth Bames. They will end in a few minutes. Well done India, Jai Hind !
I would like to make a few comments. First, the dreadful standard of journalism in the lead up to the games where I was embarrassed to be a New Zealander when a New Zealand TV journalist smeared mud on the wall of competitor’s accomdation to enhace the sensation of his reporting. Misdeeds like this put many of them off, coming to the Games.

Then the dodgy articles on security which led to the withdrawal of some, and intimidated others.Typical of many, Kiwi golden girl Alison Shanks has revealed she almost pulled out of the Commonwealth Games in Delhi due to fears over her safety.

Shanks, (pictured above) who claimed New Zealand's first gold of the Games after edging rival Wendy Houvenaghel of Northern Ireland in the individual pursuit final, spent three weeks training in Bordeaux with the rest of the Kiwi track team before arriving in Delhi.

In the days prior to flying out of France, Shanks followed the spate of negative reports about the situation on the ground in India and says she seriously contemplated following road star Greg Henderson in withdrawing.

"There were a couple days there when we were in Bordeaux and there were a lot of media reports flying around," Shanks told Fairfax Media.

"We were in a holding pattern and yes, for sure, thoughts of pulling out did go through my mind.

"I have to be honest, you do think about your safety at times like that and it's a bigger priority than competing in a bike race.

"But in saying that, obviously I am so glad we came. The Games has been fantastic and there have been no problems at all.

"Security and safety has been fine and the venues have been fantastic. The reports beforehand were a little nerve-wracking and it put everyone on edge coming in to Delhi.

"But I think we are better people for coming out of it at the other end." 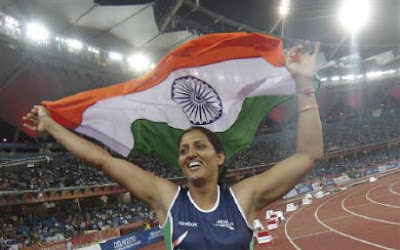 The Delhi Games was hit by a series of withdrawals by high-profile athletes who cited security and health worries after a chaotic build-up, which included the collapse of a bridge outside the main stadium.

"India has proved that it can host a big event. I want to thank everybody who made it possible," the 28-year old Poonia, the first Indian woman to win a Commonwealth athletics gold, told reporters on Tuesday.

"Security concerns are everywhere and India is a very big country. I did not like it when they blamed our country for withdrawing from the event.
"We also love our life. They would have been our guests and we would have taken more care of them than ourselves," Poonia added.

Some athletes, including Jamaica's world and Olympic sprint champion Usain Bolt, pulled out because the Games were taking place too late in the year. But others such as Australian world discus champion Dani Samuels refused to travel to India due to security and health concerns.
Poonia ended India's 52-year wait for an athletics gold medal at the Commonwealth Games when she led the home nation to a clean sweep in the women's discus on Monday.

There were many heroes for me in the Games, but Gordom McCauley stand out. The club man who gives it all for his friends to get a medal./


At 38, McCauley (pictured below) is comfortably the elder statesman of the New Zealand cycling team, but overnight he rode exceptionally to help Roulston win his third Commonwealth Games medal. 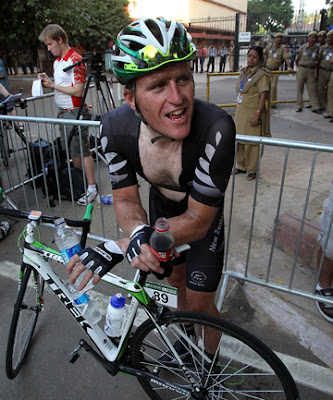 He broke away early with Sam Bewley and Marc Ryan.

Bewley and Ryan tired after a busy track schedule and eventually withdrew, leaving McCauley to ride out in front with Northern Ireland's David McMann for more than two hours in the 38 degree heat.

When they were eventually caught, McCauley found the energy to help Roulston up to second.

When asked how he was so strong today, McCauley simply pointed to the silver fern on his suit and said:

"'I love racing for my country. I've never really had a good road race at the Games, I've only really had a good TT [time trial]. This is probably my last Games so I wanted to go out on a high and race as hard as I could.''

Showing he still had the goods was also a major motivator, he said.

McCauley is the type of athlete the Games should be about. He has that selfless, win or die trying attitude which gets the best out of athletes.

Just as the Games got underway, New Zealand Breakfast Show, Paul Henry put his foot in it and undermined New Zealand’s shakey reputation in India, when he asked NZ Prime Minister John Key whether Sir Anand, who was born and raised in New Zealand by his Fijian Indian parents, was "even a New Zealander?"

This received world-wide publicity and dented our country’s reputation badly.

The Games are over, but actions by Paul Henry, smears by one NZ TV journalist and the athletes who pulled out, will be remembered by Indians long after memories of our large haul of silverware and outstanding wins against our Trans-Tasman rivals in sevens rugby and netball.

Well done India, you showed the world you can do it in style. Congratulations on your large medal haul. Jai Hind! Jai Hind!
Posted by Bob McKerrow - Wayfarer at 07:53

Didn't see any of the Games myself, but I did see the sevens and netball highlights on stuff.co and it looked pretty good.

We New Zealanders continue to embarrass ourselves by being provincial beyond belief. That someone like Paul Henry is allowed on air is itself a condemnation of the broadcasting heads and his endlessly racist and puerile "humour" is stomach-churning.

For me, it's just the mountains, the rivers and the forests. If they disappeared I wouldn't give New Zealand a second thought.