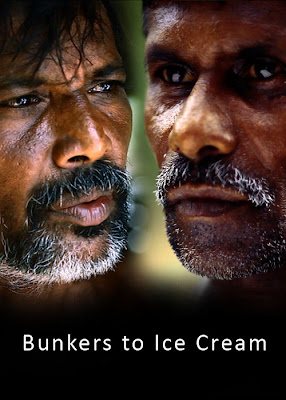 A documentary that looks at the lives of the people in the northern part of Sri Lanka who are recovering from an over 25 year old civil war titled “Bunkers to Ice Cream” was released by the Sri Lanka Red Cross Society to the public at the 8th Asia Pacific Conference Red Cross  in Amman, Jordan.on Tuesday 19 October, 2010.

To view, try this link:http://www.youtube.com/watch?v=Z0Sexg_iIsI

I have been getting so frustrated over the past two months with the lack of funding we are getting for 200,000 families without housing in the north of Sri Lanka so we got together with the Sri Lanka Red Cross

and my good colleague Mahieash  directed this movie in Kilinochchi, Sri Lanka. It follows the lives of Arunachalam (left) who is a potter in profession and Ramaiya (on the right of the photo), an ice cream maker who are struggling to keep their lives and livelihood afloat.


From bunkers to ice cream

It is true that the past was gruesome to all of them. It is true that their souls are broken and the light in their eyes are fading away, but their duties as fathers, mothers and elders is not to find a better life for themselves, but to create a better tomorrow for their children so that they will carry the torch of courage and determination to become part of a peaceful Sri Lanka