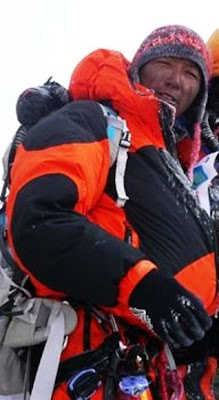 A month ago I wrote an article about Angtharkay, Father of the modern Sherpa,. Here is the link. http://bobmckerrow.blogspot.com/2010/09/ang-tharkay-father-of-modern-sherpa.html   When researching this article I came across frequent references to Chhewang Nima Sherpa (photo left) who had climbed Mount Everest 19 times.
I was sad to read yesterday that rescuers called off their search for Chhewang Nima Sherpa, accepting he had died after being swept away by an avalanche in the Himalayas two days ago.  43, was fixing ropes for a climbing group high on the 7,129 metre (23,400 foot) Mount Baruntse on Saturday 23 October, 2010 when the avalanche hit as one of his colleagues looked on.

“We have decided to abort the rescue operation. There is no way we can find him. We have concluded that he is dead,” Jeeban Ghimire, managing director of Sherpa Shangri-La Treks, which organised the expedition, told AFP. “It’s impossible to get to him. The area where we believe he was swept into is a rough icy slope that is inaccessible. It’s a sad decision and a sad day for us.” Ghimire said that a second sherpa, who was working with Chhewang when the avalanche hit at a height of about 7,045 metres, had reported to base camp that Chhewang was missing.

Chhewang, a father of two daughters, climbed Everest twice earlier this year and had also climbed many of the Himalayas’ other highest peaks. Baruntse, in eastern Nepal, was first climbed by a New Zealand expedition in 1954, one year after the 8,848-metre Everest peak was first conquered.

What an amazing man to have climbed the might Mount Everest 19 times. 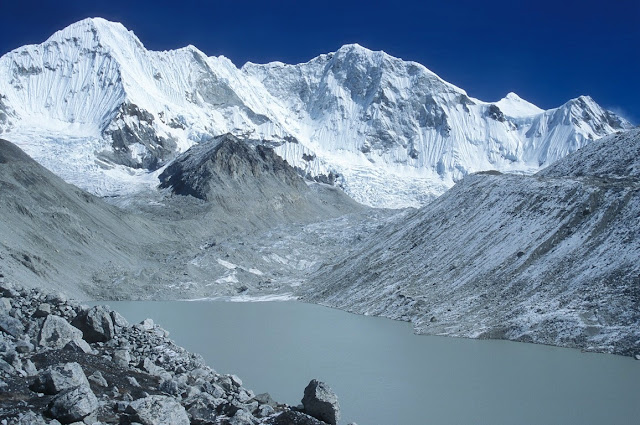 Baruntse Peak lies in the heart of the Khumbu massif to the west of Makalu. This captivating ridge is surrounded by some of the most famous peaks of the world: Everest, Lhotse, Ama Dablam and the list continues.

Baruntse is a mountain in eastern Nepal, crowned by four peaks and bounded on the south by the Hunku Glacier, on the east by the Barun Glacier, and on the northwest by the Imja Glacier. The mountain was first climbed May 30, 1954 via the south ridge by Colin Todd and Geoff Harrow of a New Zealand expedition.

So while we read about the first expedition to climb Baruntse, let's spare a thought for the late Chhewang Sherpa, his wife and two daughters. The Sherpa's have given so much to mountaineering in the Himalaya and it is good to read  about the father of them all, Ang Tharkay. http://bobmckerrow.blogspot.com/2010/09/ang-tharkay-father-of-modern-sherpa.html 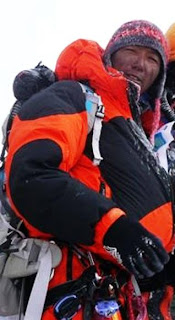 Before foreigners began climbing Everest, Sherpas had no desire to trespass on the sacred mountains. Their language didn't even have a word for summit. Now they work on expeditions to help sustain themselves, but every time someone steps foot on Everest, the lives of Sherpas are at risk.In 1990, I helped create the first hut system in Nepal--The Sherpa Guide Lodges. Two years later, I began leading treks to the Base Camp.Present during the worst storm in their history, I was appalled at world press coverage of the deaths of foreigners with little mention of the Sherpas who also perished. I returned home to write their story so others would understand their culture and appreciate their contributions to Everest mountaineering.
In Beyond the Summit, details of Sherpa culture and religion are interwoven in a tale of romance and high adventure. The story has something for everyone: a love affair between an American journalist and Sherpa guide, conflict between generations as the modern world challenges centuries of tradition, an expedition from the porter’s point of view.

In 1597, the forms highlighted in the water and supplied a commercial hostile transport that later argued a period.