A week ago today, I wrote a short article on Keith Murdoch, New Zealand's mystery rugby man. I gave a first hand account of playing rugby with him. A friend alerted me to a women who tracked him down in outback Australia and based on their talks, Downstage Theatre in Wellington staged a play about big Keith Murdoch in June-July this year. This is a man who will be etched in stone, silver, gold and on the screen, for just wanting to be a good Kiwi bloke, a man who liked his space.

I only wish I could have seen big Keith on the stage, with barrel chest, arms folded and legs like tree trunks, biceps bulging, and his trade mark short shorts that showed his manliness. And in his hand the rugby ball was the size of a tennis ball. How did he ever fit in a mini minor ?

Finding Murdoch, Wellington, 16 Jun 2007 - 14 Jul 2007
Tragic Lost Son of NZ Rugby Found
World premiere kicks off at Downstage about the infamous ex-All Black Keith Murdoch and the woman who managed to hunt him down.

Margot McRae's account of the media storm that engulfed the player when he punched a security guard in 1972 sheds new light on the greatest tragedy of NZ rugby. 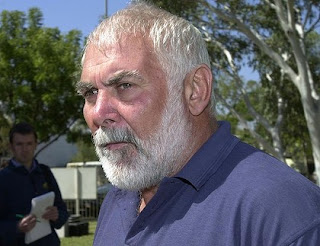 A rare photo of Keith Murdoch taken in 2001.

The late-night incident happened just hours after the Otago prop scored the All Blacks only try in their 19-16 win over Wales at Cardiff Arms Park. Murdoch was ordered home in disgrace - the only All Black ever expelled from the team - but never made it back to his home or to the press waiting for him. He got as far as Australia where he has been living in exile ever since.

Nobody really knows what happened that night but many have tried to find out.

Margot McRae managed to track Murdoch down and Finding Murdoch is her fictional account of the search for the All Black legend, how far the media will go to get a story and how it affects the real people behind the photos and interviews.

Murdoch didn`t take Limerick to nobles nob.I shared the house with him and was one of the co-accused.I was with him in the courthouse on the day of his testimony.Let the kiwi`s who remember him know he is innocent.