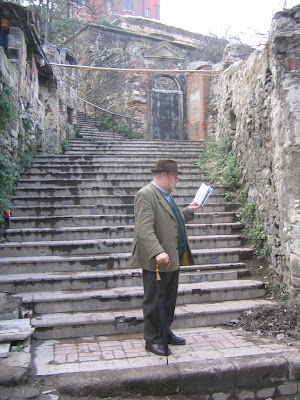 When you live in interesting places, many odd people drop in to see us. Steve Masty, a larger than life character dropped in to see me last weekend in New Delhi before I left for Geneva and, a week later, Steve is here for lunch before he returns to London.

I first met Steve Masty in a club in Peshawar He was managing the Khyber Club. It was late 1993, Steve was lounging in a wicker chair, wearing white Shalwar Kemeez, looking like a young Hemmingway. I used every drop of charm and decorum I had to try and get club membership as I knew I was going to work some years in Afghanistan and wanted membership badly, as it was the only place in this fundamentalist frontier city one could have a wee dram when visiting.

“No problem, “ he smiled. This was the start of a friendship that has lasted ever since.

What a talented man: Song writer, movie director, singer, author, artist, poet, development specialist, cartoonist and raconteur. He once was a speech writer for Ronald Reagan, Steve studied for a PhD at St. Andrews in Scotland and his thesis lies there unmarked.

Last year he published a book called The Muslim & Microphone: Miscommunications in the War on Terror (Social Affairs Unit, London, 2006). An astounding book.

Our relationship bonded strongly during the tough winter in Kabul in 1995 when the Taliban were relentlessly bombarding the city. I recall spending many winter evening with Steve discussing literature, history, local savagery and world politics. I would often prompt Steve to get out his guitar and sing one of his songs about Afghanistan. Sadly, he just left for London. I am alone with my thoughts.
Posted by Bob McKerrow - Wayfarer at 07:05

yes indeed, when you live in a place with that landscape you have all the inspiration to work in a good book or spend some time in your vacation.

i love the photo, he looks so inspired, and obviously, I can't imagine how lonely you must feel. But don't worry youre friends for ever

Keep up the great writing.