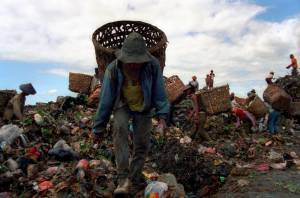 I have a movie director here at the moment making a small documentary on global warming.
I went out with her this morning to Kalibata in Jakarta, which is situated on the Ciliwung River, 3 metres below the main road bridge.

Kalibata is typical of slum areas in mega cities throughout Asia. Situated on the true left of a garbage choked river, the people are subject to flooding every year. On the opposite side of the river is a garbage dump where 20 trucks were unloading their contents. This year in February, all the people in Kalibati were evacuated and the village was covered with 6 metres of water. The bridge above had its iron railings twisted and broken by the sheer force of the river.

I spoke to Sulieman, who makes a living from retrieving water battles thrown into the river.
“ It’s hard work catching the bottles, cleaning them, and crushing them into blocks,” he said. For all this work he makes $ 0.45 a kg. The life of garbage collectors, recyclers and slum dwellers in Jakarta is very difficult, and worsening year by year with climate changes.
The Indonesian Red Cross has started a programme, community based risk reduction, to train and empower villages like this to be able to protect their lives and communities.
Posted by Bob McKerrow - Wayfarer at 22:04

Email ThisBlogThis!Share to TwitterShare to FacebookShare to Pinterest
Labels: The rubbish collectors

This I hope to see for myself in the not-too-distant future!