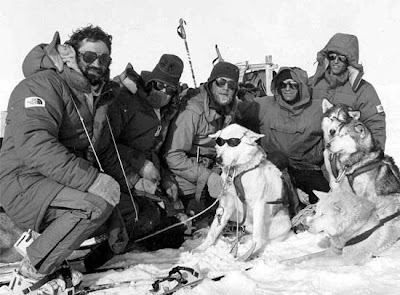 L to R Bob Mckerrow, Will Steger, Paul Schurke, Bob Mantell and Richard Weber.
This image was taken in May of 1985 on the Steger International Polar expedition . The dog with the sunglasses is Slidre, he went to the pole and Greeenland. Slidre was born at the Eureka weather station on Ellesmere Island.


On Monday I went out to a village in Jakarta to be interviewed by a movie director on the Global Warming-Climate change programme we are working on with the Indonesian Red Cross. It is interesting that most of us who were with Will Steger on his 1985-86 unsupported dog sled expedition to the North Pole, have become strong advocates for cutting green house gas emissions.

Will Steger the leader is currently leading the Global Warming 101 Expedition to Baffin Island which gives people an opportunity to learn first-hand how the Inuit culture is coping with global warming. The Will Steger Foundation is a nonprofit organization You can check it out on Will's site: http://www.globalwarming101.com/

The five of us pictured above spent considerable time in 1985 with Inuit communities living in the MacKenzie River Delta, Canada and along the coastline of the Arctic Ocean as we travelled by dog sled to Point Barrow, Alaska. We could see that the changing weather patterns were affecting their survival as traditional sources of food were reduced by the shrinking thickness and area of ice on the Arctic Ocean. The next year when we travelled to Baffin Island, we saw and heard the same story. I am delighted my old friend Will Steger is up there is Baffin Island bringing the reality of global warming to our computer screens. I will update you on the work we are doing here in Jakarta in the next few days when I get a spare minute
Posted by Bob McKerrow - Wayfarer at 17:46

Oh, Bob... If you could see the Arctic now, you'd weep. During my last trip there in 1998, the permafrost was permanently melting. Inuit homes throughout the western portion were sinking into bottomless bog and getting around in the summer meant slogging through hip-deep bog in many places. You know, I frankly couldn't give a damn about the "debate" over whether this is a natural or a man-made phenomenon. It's happening, and whatever the cause we bear a collective responsibility to minimize humankind's impact (or contribution) to the process as fast as humanly possible. We're quick to wage war and can always find gazillions for that... but climate change? "Oh, so expensive! Let's talk!" John L