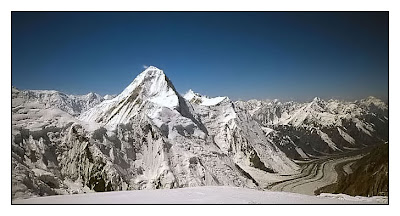 This picture shows Khan Tengri, the highest peak in the Tienshan mountain range in the east of Kazakhstan, on the border with China. It is approximately 7000 metres high.The view is from the summit of Marble Peak (6400 meters high). The glacier on the right is the Inilchek glacier which is more than 60 kilometers long.

Mountains inspire many people. Most have their favourite mountain or mountain ranges. I have been fortunate in seeing many of world’s most spectacular mountains, and my favourite range is the majestic Teinshan in Kazakhstan. Khan Tengri is the mountain I adore: so beautifully sculptered and imposing.

One thousand two hundred years ago Khan Tengri (Lord of the Spirits) was first mentioned in Chinese chronicles. Many famous explorers and mountaineers such as Semionov and Merzbacher tried to reach it. The Ukranian alpinist M. Pogrebetskiy was the first person who succeeded in climbing it (1931). Passing from the south, he managed to solve the difficult problem of getting enough provisions for his long-term expedition in such a wild area by taking a caravan of horses to the foot of the mountain. He then found the most logical way up to the top, which is now considered the classical route. In 1964 B. Romanov and K. Kuzmin opened the northern rib on the side of Northern Engilchek, on what is called the Marble Rib, along a series of marble chimneys from 6,000 to 7,000 meters altitude. The eastern face was first climbed only in 1988. The most difficult routes from a technical standpoint are on the northern face, which rises up for 2,000 meters. They were opened in 1974 by E. Mislovskiy and B. Studetin. The climb up Khan-Tengri is difficult indeed because of the extreme conditions: the frequent bad weather, the hurricane-like winds and the extremely low temperature. On an average the ascent up the normal route takes twelve days. The record for the base camp-summit-base camp course is fourteen and-a-half hours, set by Gleb Sokolov, who won the contest held at Khan Tengri in August 1992.
Posted by Bob McKerrow - Wayfarer at 02:32