Barry, give the kayakers some of your shoes 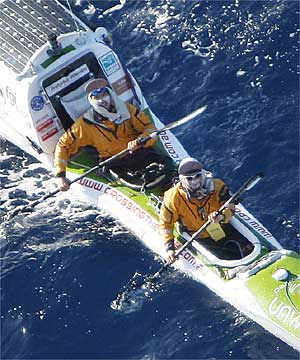 They may have no shoes and no money when they arrive in the next 24 hours in New Plymouth but who cares ? The early Polynesians arrive barefooted after their early kayak voyages. The people of New Plymouth are generous and will lavish them with hospitality and at least give them a pair of shoes each. I am watching the countdown on crossing the ditch website and they have paddled 1.05 km in the time it took me to drink my tea. Two Bangladesh wickets fell during that time in the test match at the Basin Reserve in Wellington.
With many of us still reeling today after the death of Sir Ed yesterday, I couldn’t help but think how he would have approved of the raw courage, determination and doggedness of Justin Jones, 24, and James Castrission, 25, as they close in on New Plymouth.

They were deeply moved last night when they sighted Mt Taranaki about an hour before sunset last night.

At 0700 Jakarta time, 1300 NZ time, they had cracked the 60 km mark, with 59.9 km to go. This is real adventure bought into your living room or office. For me it is a small office on the 19th floor of an apartment in Jakarta.

During their last broadcast the two kayakers said it was a starry night, with calm seas "and the lights of New Plymouth are starting to twinkle".
The sighting followed a vexing two days in which winds and currents turned them round in a loop to the north, when they were actually trying to paddle southwest to reach New Plymouth.

My brother Barry McKerrow and my two nephews Sean and James are surfers and have been sending me the sea, current and wind conditions during the past two days so I feel I am out with James and Justin. I am going to call Barry in a few minutes and see if they can take a few pair of shoes down to the harbour to give to James and Justin.

How times have changed since Paul Caffyn our famous New Zealand Kayaker did the first circumnavigation of Australia in around 360 days, There were no bugles, no drums and virtually no publicity for Caffyn when he finished all his major kayaking adventures..

Technology, and I am proud to say it is from a company, TracPlus, in my home town Dunedin, is able to track them every centimeter of the way.


Yesterday they stayed in the tiny cabin of their 9m kayak until the wind became more favourable, and put themselves back on full food rations, after halving their daily meals 30 days from mid-December. They began paddling again about 3pm.
"The guys are so frustrated at today's progress they have decided to paddle into the night," Mr Brothers said after the sighting of Mt Taranaki-Egmont. "They are steaming for NZ".
The pair have already covered more than 3000km, weaving across the Tasman on a trip which was planned to take 42 days to cover about 2200km on an approximate straight-line route.

As I conclude this piece, another wicket has fallen in the test match and they have only 58.55 km to go.

Thanks to the Daily News in New Plymouth for the photo ( I sent an email asking for permission)
Posted by Bob McKerrow - Wayfarer at 15:46