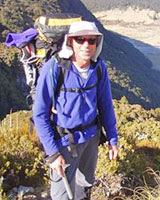 I received a very moving comment from cragrat, a close friend of Antons, who said:


I have just got back from Antons service in Wanaka - yet another Wanaka memorial gathering of old friends to celebrate old friends passing.