Off to the Himalaya in 18 days 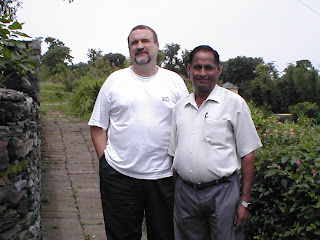 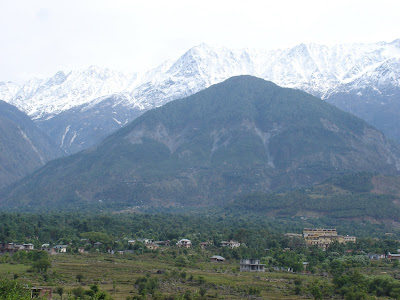 Top photo: Rikhy Ram right, me on the left.

Over the years I have visited Sidhbari at least six times and I am planning to go back in 16 days time. Here I describe my first visit in July 2003. The job I am doing is quite stressful and by going to the high mountains and resting at their feet, I gain a sense of full relaxation and rejuvenation. Before I used to climb or conquer mountains, today I let the mountains engulf and conquer me.

I got back Tuesday night from Sidhbari in Himachal Pradesh where one of my friends, Anuj Bahri, (bookseller and publisher) has a house overlooking the Dhaula Dhar mountains, Norbulinka Tibetan Institute, Gyuto Monastery and only 30 minutes from Dharamsala and 50 minutes from McLeod Ganj. A very famous Hindu temple is nearby on a river bank and not far away is the Chinmaya Mission Trust where Swami Chinmayananda, a very enlightened Swami, lived until his death.

Anuj's house also overlooks a spread-eagled slate-roofed village surrounded by beautifully sculptured rice fields on sickle-shaped terraces. Women in bright coloured clothing often or not yellow and red, work in the fields.
It was fun to travel and live with Anuj for a few days in an Indian village where you have the 'real local village people' living side by side with 'the pretenders' - artists, writers and other interesting people who have left big city life behind to come to the tranquillity of this green, fertile mountain region to write, paint and find the 'truth,' or to get screwed up in thought and mind by not finding it.

But like every house in India, you need a Bamri: cook, watchman and bottle washer, who brings a character of Baldrick proportions into the household. A Sad Sack figure with sallow cheeks and missing teeth, looking as if he is in the advanced stages of TB. However Anuj assures me he is not ill, but has made a skeleton of himself through his regular encounters with local village women who cheat him of his hard-earned money, with the promise of marriage. His first wife deserted him and the proposed second, ran away with his money. Now he is on the prowl for a third.

Bamri; bumbling, clumsy and likeable, brought a sense of humour that only a hill village man can do.

The day after I arrived I met Rikhy Ram who worked 26 years in the Indian army intelligence service as a photographer on border patrols and spent most of his time in the mountain region of Bhutan, Sikkim, North Eastern Indian border areas and these local mountains.

On 8 and 9 March 1959 Rikhy was in Tawang Gompa when the 14th Dalai Lama crossed from Tibet into Arunchal Pradesh via Bhimla. He was part of the group that ensured the team crossed safely. I later found out that the 6th Dalai Lama was born in Tawang Gompa which is now inside India and not far from the border of Bhutan.

It seems his work was intelligence of a sort, or as I would say in my parlance the 'modern great gamer'; checking the borders between the Tibet/China and Bhutan and India, getting good photographic information. In later life he worked in Himachal Pradesh in the Pir Panjal and Dhuala Dhar, mapping mountains on foot and through aerial surveys. Interestingly enough, he was in the Congo from 61 to 63 and was a member of the search and rescue mission which helped bring the body of Dag Hammarskjöld, the then Secretary of the UN, from Angola back to Leopoldville. He also spent four month in New York and I am sure he wasn't working for McDonald's although Kohli in his book 'Spies in the Himalayas' would believe this suggestion.

Anuj and I had lunch with Rikhy in his home where he lovingly brought out old and worn maps of all the areas he had worked in and the maps were neatly, and lovingly, made into a book, and all carefully arranged and numbered. The maps on Bhutan were particularly interesting with all the places he stayed and visited, the peaks he climbed and the routes he took, all neatly marked in red dotted lines.

As he unfolded the maps, he unfolded his past locked in his heart and mind for years. Sharing journey's with a fellow mountain wayfarer over a map doesn't need a common verbal language because maps and markings tell a story visually. Remnants of curries and dahl had in mountain camps were evident by the stains on the map which only added to the inuendo behind the intrigue. I am sure no one will ever know precisely what Riky did. Maybe he didn't know exactly the nature of his missions, planned in Lurgan Sahib's house in Shimla.

Not far from Anuj's house lives Khosa and his wife Lakshmi, a famous Indian artist, A Kashmiri pandit, whose painting represent the journey and transition from this life to the metaphysical and he gets a lot of his inspiration from the Upanishards,(sp) early Hindu literature and Rumi the famous Islamic Sufi poet. Anuj's immediate neighbour is a Gorkha, Onkar, whose grandparents moved from Nepal to Himachal Pradesh. On the first night we arrived an impromptu party started as Onkar arrived, then Khosa. At first Onkar turned up at his nose at the wine I had brought, saying "that's a woman's drink, we drink whiskey or rum here."

But as the night wore on, there were lots of empty bottles of the "women's drink" I had brought from my local wine shop in Delhi as Khosa drifted into a spirit-inspired trance where in front of our eyes, he made a transition journey to the metavinacal, a journey even Bachhus would have envied. In his trance, we couldn't communicate with him and Anuj had to escort him home to ensure night-flying Nun's from the nearby Tibetan Monastery, didn't capture his Hindu spirit.

We spent one day going to Dharamsala and onto McLeod Ganj where the Dalai Lama lives. Dharamsala is a typical dirty hill town but once you leave the town, and climb up towards McLeod Ganj, the landscape becomes quite spectacular when looking down to the lowland rice fields shrouded in morning mists, and then upwards, nestled on a tree-clad ridge at over 7,000 feet, is McLeod Ganj, the residence of the 14 th Dali Lama. We spent time at the Tsuglagkhung complex where the Dalai lama lives, visited the temple, watched the monks in their daily debating contests and generally imbibed the ambiance. For a head of state, a people who are exiled in a foreign country, the Tibetan's have established a powerful cultural and economic presence in this area.

However, I made the mistake of visiting the Norbulinka Monastery the day before which is a superb piece of Tibetan architecture, with a Japanese Buddhist influence which gives an air of tranquillity stemming from a combination of elements, the gardens and its trees, waterfalls, streams and the sky and recent rain puddles, and, at the end of a shady walk, is a wonderful temple with a huge golden Buddha. A photo of the Dalai Lama is placed over a covered pulpit from where he delivers sermons when he visits. The elevated situation of McLeod Ganj was impressive, but I found little of inspiration. Norbulinka radiated more of the aura I had expected.

Other interesting places close to Anuj's house in Sidhbari is a place called YOL, which stands for 'Your Own Lines' and was the place where Italian prisoners of war were transported to during the second world war. You can still see they houses build out of stone. Another special place not far from McLeod Ganj is a small English-built church called ' St John of the Wilderness.' It was built in 1853 and many famous soldiers, explorers and surveyors are buried here. James Bruce, Earl of and Elgin and Kilcardine K.T.G.C.B.G.M.S.I. VICEROY AND GOVERNOR GENERAL OF INDIA was buried here and a memorial erected by his wife.
A number of other young British soldiers in once bloody, now romantic battles of a past long gone, have either commemoration tablets of graves. One that I recall was Lieutenant R.D.Angelo 'who died at Wano, Wazirstan 30 November 1894 of wounds he received in action against the Mahsuds.' (I am sure many of their descendants are still rabble-rousers)

It took me back to the lines from Kipling

'A scrimmage in a border station -
A canter down some dark defile -
Two thousand pounds of education
Drops to a ten-rupee jezail -
The Crammer's boast, the Squadron's pride,
' Shot like a rabbit in a ride !

As I work in Pakistan, Afghanistan and India, I am fascinated by the mountain river systems. With partition, these mighty rivers had international boundaries pushed on them. Punjab - the land of five rivers were originally referred to as the Jhelum, Chenab, Ravi, Sutlej and Beas, but with partition, the Beas flows only in India, so to keep the name Punjab correct, Pakistan added a fifth river to replace the Beas, the Indus. I have crossed the Indus, Jhelum, Chenab and the Ravi, so it was a thrill to travel for more than an hour alongside one of the main tributaries to the Beas River, and to cross it twice to and from my trip to Sidhbari.

This is definitely my favourite spot in the whole Himalaya.
Posted by Bob McKerrow - Wayfarer at 22:49

Email ThisBlogThis!Share to TwitterShare to FacebookShare to Pinterest
Labels: My favourite village in the Himalaya