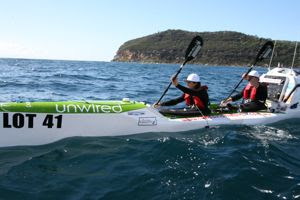 I listened this morning utterly fascinated at being able to tune in to Justin Jones reporting on their progress in attempting to be the first people to kayak across the Tasman Sea.

James Castrission, 25, and Justin Jones, 24, left Australia on November 18 heading for Auckland but have struggled strong headwinds, mechanical failures, powerful currents and now, bruised with and sore bodies, they appear to be rapidly running out of energy. deteriorating. (photo above of the start)

This morning their progress chart was showing they were 167.83 kilometres out from New Zealand with a predicted landing at New Plymouth on 13 January 2008, as currents drag them south. Yesterday landing at Cornwallis Beach in the Manukau, was an option but no longer.
Listening to Justin today, you can hear and feel the end of trip lethargy and depression setting in as he says, “it is a bleak grey day” and “we have to grind it out.” But again, you can feel patches of sharpness as he says “ we have to stay focused.”

Referring to their state of health, expedition spokesman Tom Mitchell said.
"There are certain health issues that have come up."
"They have continuing skin infections, deterioration in the legs."
While the men have exercises that they are meant to do regularly for their legs, they are often too exhausted to do them properly.
"They have a lack of muscle co-ordination from not standing up for a long time," he said.
"It's definitely an issue that will become apparent once the boys attempt to walk on ground again. Go to to read more: http://www.crossingtheditch.com.au

But I can’t get that haunting picture out of my mind of Andrew McAuley’s partner crying as she kneeled on his upturned kayak. Paddling by day, drifting at night when he slept in a protective cocoon, McAuley, 39, crossed 1500 kilometres of ocean. On Friday, February 9, 2007, he was within 30 nautical miles or 54 kilometres of the South Island of New Zealand, close enough to take photos of high mountains.
Some time the next day, he expected to make landfall and achieve a long-held ambition to become the first man to take a kayak across the Tasman Sea. At 7.15pm, the New Zealand Coastguard picked up an almost indecipherable distress signal from a vessel that identified itself as Kayak 1. There were two clear words: "help" and "sinking". Then silence.
The following evening, his upturned seven-metre kayak was seen from the air. It was recovered but McAuley's body has never been found, and it is believed he drowned in 15-degree water when the kayak capsized while he was asleep. My prayers and thoughts go out to Justin and James for a safe landing.

Then there was the other trans-Tasman rowing success on the second last day of 2007 when Steven Gates, Andrew Johnson, Kerry Tozer and Sally Macready arrived in Australia on December 30 after completing a trans-Tasman row in 31 days. They set out from Hokianga Harbour, north of Auckland, on November 29.


And another wonderful kayaking achievement was by the German kayaker Freya Hoffmeister who became the first woman to paddle around the South Island.
Hoffmeister returned to Okiwi Bay near Nelson a few weeks back, setting a new record of 70 days for the 2500km trip and finished with a flourish, doing two rolls as onlookers cheered and opened a bottle of bubbles.

"I feel well done, like a good steak," Hoffmeister said as she climbed out of her trusty black kayak and patted her butt. "I want a shower and dry clothes, but first I must go for a swim."
The 43-year-old then floated on her back, stretching her tired muscles.
She had paddled the final 169km through the night from Big River east of Kahurangi Point on the West Coast, taking 10-second power naps. She had planned to rest overnight at Farewell Spit but decided to keep going and with a tail wind reached Okiwi Bay at 3pm.
West Coaster Paul Caffyn, the first kayaker to circumnavigate the South Island, was there to hug Hoffmeister, who beat his record by six days.
"It's an outstanding accomplishment," said Caffyn. "I don't think there is anybody with quite the same 100 per cent determination for achieving a trip like this.
"You have to be so strong mentally as well as having the physical skills."
Christchurch kayaker Fiona Fraser, who greeted Hoffmeister with a pavlova, said: "She is so brave and inspirational. She has battled huge seas, doing 60 or 70km some days."
Posted by Bob McKerrow - Wayfarer at 21:21

greetings to all.
I would first like to thank the writers of this blog by sharing information, a few years ago I read a book called costa rica investment in this book deal with questions like this one.

Hello .. firstly I would like to send greetings to all readers. After this, I recognize the content so interesting about this article. For me personally I liked all the information. I would like to know of cases like this more often. In my personal experience I might mention a book called Generic Viagra in this book that I mentioned have very interesting topics, and also you have much to do with the main theme of this article.

hello friends sure is a great experience

Hey I found this website to be actually fascinating!
Bookmarked!

My site; trying to conceive tips

Article writing is also a excitement, if you be familiar with after that you can write if not it is complicated to write.


Look into my web blog :: exercises to increase vertical

Thanks for an idea, you sparked at thought from a angle I hadn’t given thoguht to yet.
Now lets see if I can do something with it.


Have a look at my webpage ... having trouble getting pregnant the third time

I'm linking this webpage from my private blog . this has all the usefull data necessary.

Feel free to visit my webpage trying to get pregnant tips

Thank you so much for sharing this great information. Priligy increases the time it takes to ejaculate and can improve control over the ejaculation. Priligy is used to treat premature ejaculation in adult men aged 18 to 64 years. Buy Priligy online from onlinegenericmedicine.com, Online Generic Medicine is an online pharmacy store that provides generic medicine and medication. they provide the best in class products and best deals. Buy medicines and get the generic medicines delivered in the USA, UK & Australia. Click here to find out more about this medicine.