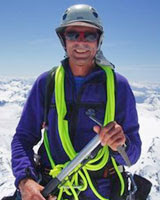 I arrived at work this morning at 7a.m and checked the NZ news and was stunned to see the news about the death of Anton Wopereis on Aoraki/Mount Cook.

Climbing accidents, like aircraft crashes, occur from time to time. It is always sad to read the accounts. The death of Anton Wopereis was a genuine mountain accident and sadly, killed a highly experienced and respected New Zealand mountaineer. I met Anton a few times in the Southern Alps and have a huge ammount of respect and admiration for he and his achievements.


I leave it up to long-time friend Dave Macleod who said Anton was a quiet, gentle person, but immensely strong physically "in terms of his fitness".

His partner Barbara said keeping fit was his passion. "He was always careful about what he ate."

Dave Macleod said Mr Wopereis offered unconditional friendship "which I think is a rarity these days".

When not mountain climbing or working part-time as a survey technician, Mr Wopereis would often be out mountain biking or cross-country skiing.

"He had a competitive spirit that would surface in his mountain-biking. You would often go out with him on what you thought was a gentle ride which would quickly turn into a race.

"Even though he was 54, he still had a lot of toys in the sandpit so to speak."


Mr Wopereis was good at analysing the risk in a climb and saying "yes" or "no", Mr Macleod said.

"He wasn't a cavalier type of mountaineer and guide."

Mr Wopereis lived with Barbara in Wanaka, and helped care for her four children.

My thoughts and prayers go out to Barbara, children, family and close friends. This morning I saw this quote from the Ramayana that I thought appropriate.

"Oh, best fly-jumpers, just by my astounding and astonishing impetuosity shall I venture to start with the Sun who starts his journey of the day from Mt. Sunrise, and shall I go to Mt. Dusk before Sun, and again shall I venture to comeback even before the sundown towards the same day's flaming Sun when he is garlanded with flaming sunrays around him in midday, that too without my touching the land...

"Shall I overtake all the wayfarers in skyway, or shall I parch down the ocean, or pare off the earth... Extract from: Valmiki Ramayana - Kishkindha Kanda in Prose Sarga 67
Posted by Bob McKerrow - Wayfarer at 16:35

The consolation is always that those dying in the mountains at least get to die in a place that they love - doing what they love. That gives meaning to their lives.

Dying in the mountains doesn't seem so bad from a distance.

I have just got back from Antons service in Wanaka - yet another Wanaka memorial gathering of old friends to celebrate old friends passing.

In my opinion every person ought to browse on it.