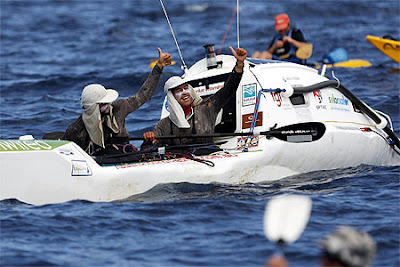 THEY MADE IT - WONDERFUL NEWS

Two Australian kayakers have completed their journey across the Tasman Sea.
James Castrission, 25, and Justin Jones, 24, reached shore at Ngamotu Beach, about 4km west of New Plymouth on NZ's West Coast, at 1220 local time
The pair, who have spent the last two months paddling across the Tasman Sea, were given a heroes' welcome after completing their epic crossing today.
More than 10,000 cheering onlookers watched as the pair paddled to Ngamotu Beach inside Port Taranaki. At 12.20pm they stopped paddling and sat about 10 metres off the shore as a local kapa haka group treated them to a rousing welcoming haka.
Supporting each other, they gingerly stood up from their seats to cheers of "Go Aussies!" from the massive crowd.

Then they jumped into the waist-deep water and, arm-in-arm, they waded ashore for a tearful reunion with waiting family.
"This feels bizarre - I can hardly walk," said Castrission after stumbling at one stage before he could reach his family.
And when asked by the Taranaki Daily News what their first thoughts were on finally landing, Justin Jones said "Thank you so much New Zealand - you guys rock."
Addressing the crowd a few minutes later the pair expressed their thanks to the people of Taranaki for their support over the last few days.
During the past 62 days the pair travelled more than 3,300 kilometres and battled strong winds and tides that saw them go round in circles for part of the trip and arrive 20 days later than originally expected.
As they approached shore today a fleet of Maori wakas sailed out to welcome them, as did dozens of local kayakers.
A New Zealand tug boat gave them a "spray welcome" by shooting water over their kayak, and a giant television screen was set up on the beach so those in the crowd could watch proceedings, entertained by a live band.
After greeting their families, they were expected to complete a customs check before being taken by ambulance to a local hospital for a check up.
There were fears Jones would be unable to stand because of the deterioration to his leg muscles, which have not touched dry land in two months.
The pair are thought to be the first to kayak across the Tasman, and have taken part in the longest two-man kayaking voyage ever.

"Thanks Taranaki - you kept us going," said Jones.
The crowd reacted by breaking into song, roaring out a huge rendition of Waltzing Matilda.
The crowding is so severe that authorities have been forced to close all road entrances to the port - forcing onlookers to foot it to the kayak's landing point, Ngamotu Beach.
But they are still pouring to the scene. Several thousand people are waiting at the beach, and many more are lining the lee breakwater at the port's entrance.
"It's absolutely huge - the place is crammed with people," says Taranaki Daily News reporter Leighton Keith, who was aboard a boat following Justin Jones, 24, and James Castrission, 25, as they made their way to the finish.
Small boats, yachts, kayaks, surf club IRBs, coastal vessels, and even the Port Taranaki tugs joined a flotilla that accompanied the pair to the finish - with the tugs are adding to the festive atmosphere by spraying water into the air from their fire-fighting hoses.
"There are lots of video cameras out, helicopters overhead. It's all developing into something special," Keith said.
Jones and Castission paddled all yesterday until 1am today, then slept for two hours before picking up the paddles again at dawn today for their final run to shore.
Before they started their adventure they had hoped Sir Edmund Hillary would greet them on their arrival, but were told he was too sick.
Expedition spokesman Tom Mitchell said the pair were gutted to hear of Sir Ed's death on Friday, but were used it as inspiration to paddle without rest until their arrival.
(Thanks to the Taranaki News and Stuff for using parts of their reports and one or two photos in this and past blogs on the kayakers)
Posted by Bob McKerrow - Wayfarer at 16:29