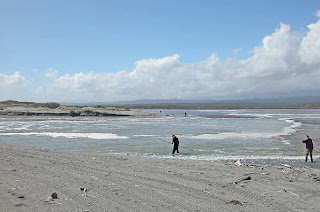 Red-hatted Sue
How well I remember
Your beauty on opening day
Last September.

You hold your net
With such grace and poise
And scoop with a rhythm
Not a sound, not a noise.

When the bait was running
A few weeks ago,
You showed no emotion
How my admiration grows.

Red-hatted Sue
I can never forget,
Watching kilos of whitebait
Running into your net.

My heart jumped with envy
For you and your style,
But I am still waiting
For that first smile.

I’m dying to ask you
How you cook your bait,
With egg or onion
Or do you eat them straight ?

I’ve got some good recipies
In my refurbished kitchen,
And would love to serve you
Inanga and pigeon.

So Red-Hatted Sue
I fantasise when I’m baiting,
Every day at the river mouth
While you are waiting

For you clearly
Are the best catch
There’s no net big enough,
No man that’s your match.

I seriously think
I’m the one for you,
We could live in a baiters shack
Just me, and you
Red-Hatted Sue

An explanation on New Zealand White Bait which you eat in a pattie or a fritter, will help you understand my poem about Red Hatted Sue. O, she was so beautiful.


New Zealand Whitebait
New Zealand whitebait are the juvenile of certain galaxiids which mature and live as adults in rivers with native forest surrounds. The larvae of these galaxiids is swept down to the ocean where they hatch and the sprats then move back up their home rivers as whitebait.

The most common whitebait species in New Zealand is the common galaxias or inanga, which lays its eggs during spring tides in Autumn on the banks of a river amongst grasses that are flooded by the tide. The next spring tide causes the eggs to hatch into larvae which are then flushed down to the sea with the outgoing tide where they form part of the ocean's plankton mass. After six months the developed juveniles return to rivers and move upstream to live in freshwater.

New Zealand whitebait are caught in the lower reaches of the rivers using small open-mouthed hand-held nets although in some parts of the country where the whitebait is more plentiful, larger (but not very large) set nets may be used adjacent to river banks. Whitebaiters constantly attend the nets in order to lift them as soon as a shoal enters the net. Otherwise the whitebait quickly swim back out of the net. Typically, the small nets have a long pole attached so that the whitebaiter can stand on the river bank and scoop the net forward and out of the water when whitebait are seen to enter it. The larger nets may be set into a platform extending into the river from the bank and various forms of apparatus used to lift the net.

Whitebaiting in New Zealand is a seasonal activity with a fixed and limited period enforced during the period that the whitebait normally migrate up-river. The strict control over net sizes and rules against blocking the river to channel the fish into the net permit sufficient quantity of whitebait to reach the adult habitat and maintain stock levels. The whitebait themselves are very sensitive to objects in the river and are adept at dodging the nets.

The New Zealand whitebait is small, sweet and tender with a delicate taste that is easily over-powered if mixed with stronger ingredients when cooked. The most popular way of cooking whitebait in New Zealand is the whitebait fritter, which is essentially an omelette containing whitebait. Purists use only the egg white in order to minimise interfering with the taste of the bait. Foreigners frequently react with revulsion when shown uncooked whitebait, which resembles slimy, translucent worms.

The combination of the fishing controls, a limited season and the depletion of habitat as a result of forest felling during the era of colonisation results in limited quantities being available on the market. Whitebait is very much a delicacy and commands high prices to the extent that it is the most costly fish on the market, if available. It is normally sold fresh in small quantities, although some is frozen to extend the sale period. Nevertheless, whitebait can normally only be purchased during or close to the netting season.
Posted by Bob McKerrow - Wayfarer at 04:47