The couple who look after Tsunami orphans in Nagapattinam. 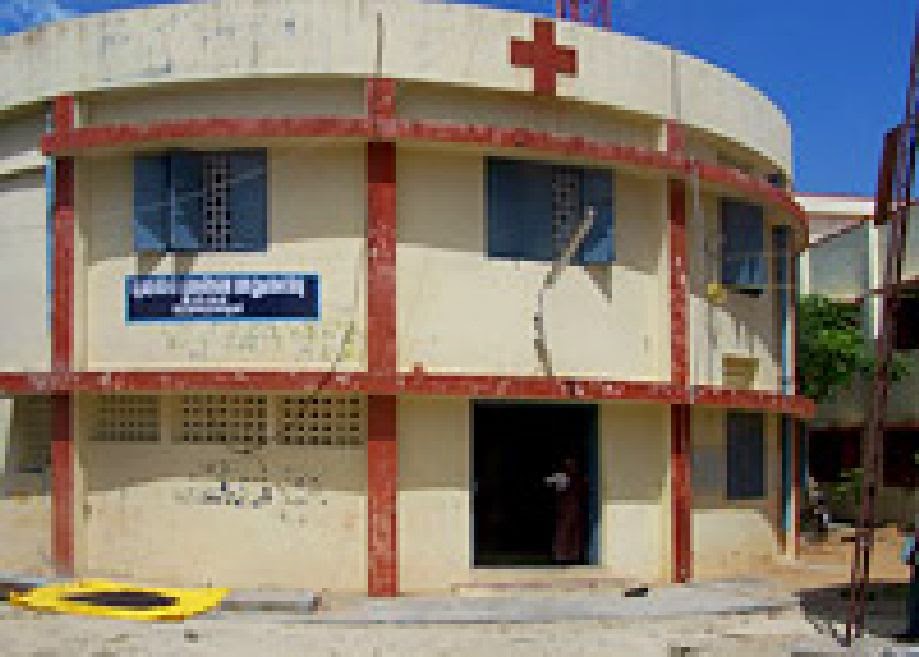 
Nagapattinam juts out into the Indian Ocean like a coat hanger, catching bad weather, storms, cyclones and Tsunamis.

I spent two years traveling up and down this coastline of India throughout the years 1980 and 1981 while I was working for the International Red Cross supervising the construction of 230 cyclone shelters in Tamil Nadu and Andhra Pradesh.

A week earlier, another lesser cyclone, crossed the coastline on Tamil Nadu, just south of Nagapattinam, killing over 500 people. I travelled regularly to Nagapattinam supervising the construction of cyclone shelters and getting to know these warm-hearted fisherfolk and farmers.
I wrote about that time on my blog. Since, I have often wondered how the people there fared during the Asian tsunami.  On Boxing Day 2014, tens years after the Tsunami struck,  this article appeared on the BBC website, written by Rahul Tandon BBC News, who was in  Nagapattinam 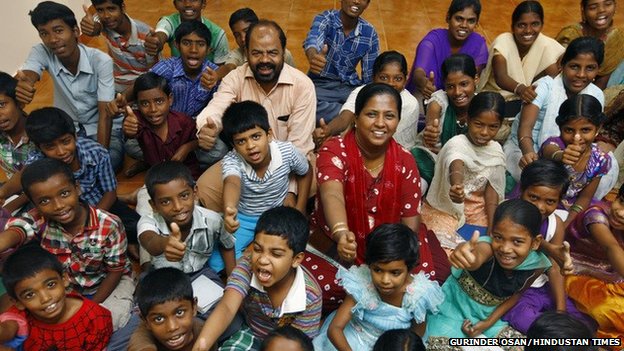 The The couple look after more than 30 children

Karibeeran Paramesvaran can never forget 26 December - it is his birthday, but he has not celebrated it for the past 10 years.
On Boxing Day morning in 2004 at 8am, he and 10 of his relatives had walked down to Nagapattinam beach, just 600 metres from his house.
His children - daughters Rakshanya, 12, and Karuyna, 9, and son Kirubasan, 5 - like all children loved playing by the sea.
Mr Paramesvaran was throwing a frisbee to his son when suddenly he saw Kirubasan's face freeze with fear. As he turned around he saw a huge wave - the size of two palm trees - heading towards his children .
It is a moment that he has relived time and time again. His voice chokes with emotion as he tells me what happened next.
"I reached out for my son, I held his hand for as long as I could but the waves were too strong. Eventually he slipped out my hands."
He then pauses for a moment. "I failed my son, as his father I should have been able to protect him but I did not." 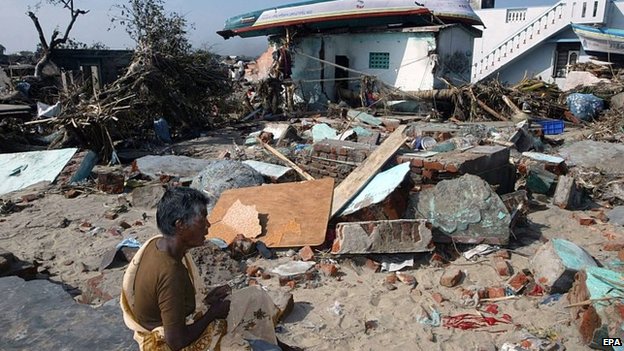 The Tsunami wreaked havoc in Nagapattinam
Mr Paramesvaran was swept away from his family by the waves. He thought he was going to die, but he somehow managed to cling on to a palm tree for five minutes and survived.
He then rushed home to see if he could find his children. His wife Churamani, who had been cooking a meal for his birthday, told him there was no sign of them.
He rushed back to the beach to try and find them. On the railway track, he found the lifeless body of his daughter Rakshanya who just a few hours earlier had bought him a cup of tea and wished him happy birthday. With the little strength he had left, he carried her back to the house.
Over the next few hours, he did the same for his other daughter and son.
Out of the 11 people who went to the beach that morning, he was the only one who survived. Some of the bodies were never recovered. 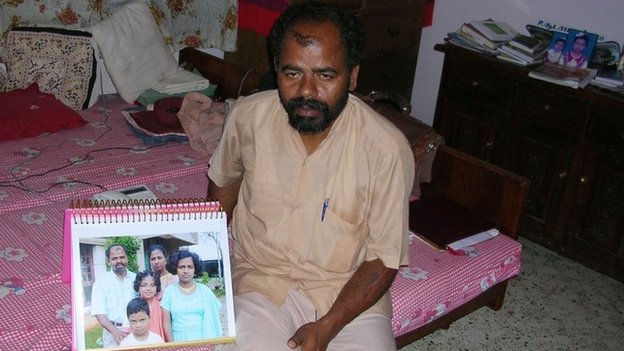 That night, he had and his wife buried their children. "It is something no parent should have to do," he tells me.
He wanted to dig a grave for each of them. But he did not have the strength, so in the end he buried them all together.
He wanted to throw himself into the grave and a few days later asked his wife to buy him some poison.
All he could see, he says, was the face of his son slipping away out of his hands. "How could I live when the sea had taken all my three children?" he says.
But 10 years on, he is still here. He has two children now but looks after many more. The way he has survived is by helping others.
In his area alone more than 60 children lost their parents and his wife told him that they had to try and help them.
Initially they took in four children - three girls and a boy.
Now they have more than 30 children staying with them in their home which has been renamed the Nambikkai (Hands of Hope).
It is full of laughter and life. As the children play around her, Churamani tells me: "People say we have helped them, but they have helped us. Without them, we would have ended blaming each other for what happened." 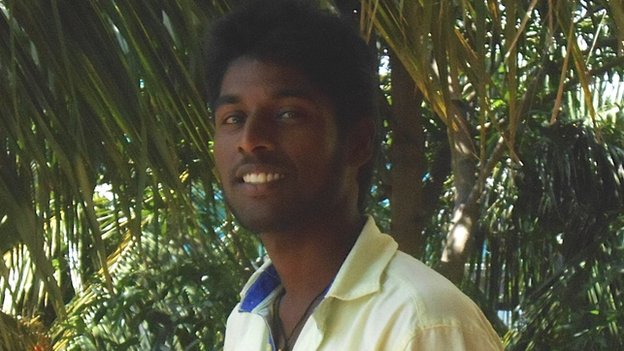 Vinod lost his grandfather, father and uncle in the tsunami
Mr Paramesvaran nods his head in agreement. "Ten years on, I have to keep busy every minute of the day otherwise I see Kirubasan's hand slipping out of mine. These children have saved my life, I have not saved theirs."
Some of the children have now left.
Vinod, whose grandfather, father and uncle died, has qualified as an engineer. For the first few years after the tsunami, he had nightmares. He could not look at the sea. He and the other children just talked about who they had lost and asked why. Nobody could ever give then an answer.
"Over time, we all got strength from each other and realised that we had to make something out of our lives. That is the best way to remember those who died," Vinod tells me.
On 26 December this year, Mr Paramesvaran and the children here will not celebrate his birthday. Instead, they will gather to remember those who were washed away and he will once again see his son slipping away from his hands.

Thanks to the BBC for permission to run this article.