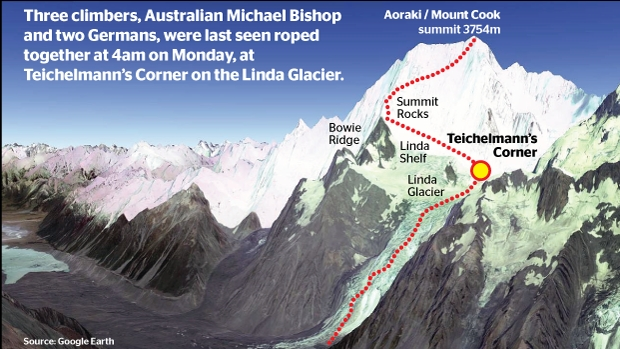 Three climbers missing on Mt Cook were warned about warm weather before they started their climb.
Alpine Guide chief guide Dave McKinley believed he was amongst the last to see Australian Michael Bishop and the two German climbers at 4am Monday morning.
They were last seen at 4am at Teichelmann's Corner on the Linda Glacier. The men were roped together as they left the hut.


Mark Inglis: It is possible for climbers to survive a Mt Cook storm if they find shelter.
"I did make them aware the temperature was quite warm and to be aware."
McKinley was also climbing the mountain and did not cross their path again.
"It did enter my consciousness later in the day when I didn't see them where I expected to, but it wasn't dangerous conditions for them to be out in.
"I talked to the two Germans mostly, their English wasn't that great but better than my German.
"It was just the type of conversation you have over a cup of coffee, but I got the impression from their preparation and gear they had some climbing  experience."
He believed Bishop had been climbing solo before joining up with the two Germans.
The Mt Cook village was still reeling from Stuart Haslett's death earlier this month, he said. Haslett had called Mt Cook village home for three months before he fell to his death on the mountain.
So for something like this to happen again so quickly has left most people "shell-shocked", McKinley said.
"Obviously we are not as close as we were to Stu, but it still hits home." 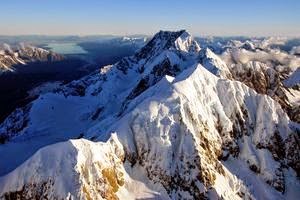 Aoraki Mount Cook with Mount tasman in the foreground.
The weather conditions were deteriorating to heavy rain, wind and cooler temperatures, he said.
It was still survivable as long as they found shelter, which could be done in the crevasse, McKinley said.
Mt Cook storm survivor Mark Inglis believed that as long as the trio got to shelter there was hope for their situation
Inglis was stuck on Aoraki/Mt Cook for 14 days in 1982 when he was a search and rescue mountaineer. Both his legs were amputated below the knee as a result of time spent on the mountain.
"We have proven that you can survive as long as you find shelter from the weather.
"Hopefully they are fine, but we don't know enough of the story right now to speculate on what's happening."
The Department of Conservation's alpine rescue team had abandoned an aerial search due to bad weather conditions.
DoC ranger Shirley Slatter said it was frustrating to be on the ground unable to search and not continue the aerial search.
"The conditions are such that we can't go out and continue to search."
Search parties would regroup tomorrow and decide what could be done, she said.
"But the weather forecast isn't looking too good."
Senior Constable Brent Swanson believed the search would re-start on New Years Day, when the weather was forecast to improve.
The three climbers were not due back until tomorrow so could not be officially classed as missing, he said.
"They failed to make it back to the hut, which should have been part of their plan," he said.
Swanson said police were keen to speak to anyone who knew the Australian - Michael Bishop.
He added the climb from the hut to the summit was 3700 metres and the trio had been due back by mid afternoon yesterday.
Police were informed at 6am that the men had not returned to the hut.
A guided climbing group based on the plateau was providing updates on both weather and visibility, and would report any sightings of the missing party, he said.
MetService has issued a severe-weather warning predicting heavy rain in the Mt Cook area, starting at 3am tomorrow.
Duty meteorologist Leigh Matheson said up to 100 millimetres of rain was expected between 3am  and 3pm.
The heaviest rain should be in the mountains, peaking in the late morning, with some gales also expected, she said.
(Thanks to stuff.co.nz for giving permission to use excerpts from this article) 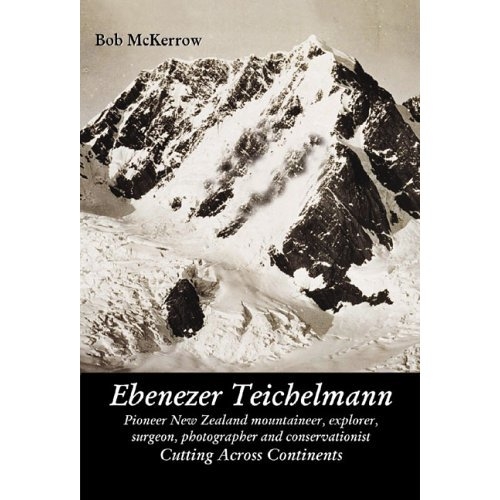 This is the east face of Mount Cook taken by Ebenezer Teichelmann in 1905 and I used for the cover of my book, right: available at

The Linda Glacier starts at the very lower right of the photo.

Climb NZ
National Route Database gives this description of the route.While this is the easiest and most climbed route on Aoraki/Mount Cook, it is also one of the most dangerous, being menaced by icecliffs. The lower glacier is often heavily crevassed and there is considerable danger from ice avalanches off the right (Divide) slopes. At the head of the glacier under the Gunbarrel (the prominent and active icecliffs of the Upper Linda), traverse left very quickly across the Linda Shelf to join Zurbriggen Ridge below the Summit Rocks (these provide access to the summit, which is over 400m above). A 150m gully that runs directly from the Linda Shelf to the start of the Summit Rocks is a popular alternative to traversing to the Zurbriggen junction. Climb the rocks - there is usually a series of ice gullies running up through the rocks which make for easier climbing. Late in the season parties may need to venture further toward the East Face. Once above the Summit Rocks follow the north-east ice cap to the summit. The easiest way to get onto the summit ridge is to traverse to the west, overlooking the North Ridge and Sheila Face, and climb a short step to follow a sustrugi filled ramp that leads to the top. Due to the 1991 avalanche the very top is probably not a smart place to stand and climbers are asked to respect the wishes of Ngai Tahu by not standing on the very top. The Linda Glacier is the most common descent route from Aoraki/Mount Cook. Most parties use two abseils (100m) when descending the Summit Rocks. As a result there can be a ‘Christmas tree’ of abandoned slings and other assorted anchors in the rock and ice. Check these thoroughly before using them for abseiling. There have been numerous falls on this part of the route. As a general rule, ascents of the ‘Linda’ take anywhere from 15-18hrs or more depending on conditions and the speed of the party. It’s a big day out in any language. To make sure it’s one to remember: get fit, plan, prepare and practice. If there are many parties intending to do the Linda (or Zurbriggen) - try to avoid a Summit Rocks bottleneck – and don’t forget your camera. A flat section on the Bowie Ridge above Teichelmann’s Corner, accessible from the Linda Glacier, provides a relatively safe bivvy spot. There is also a schrund, uphill of the Linda Shelf, which has been used for  shelter. 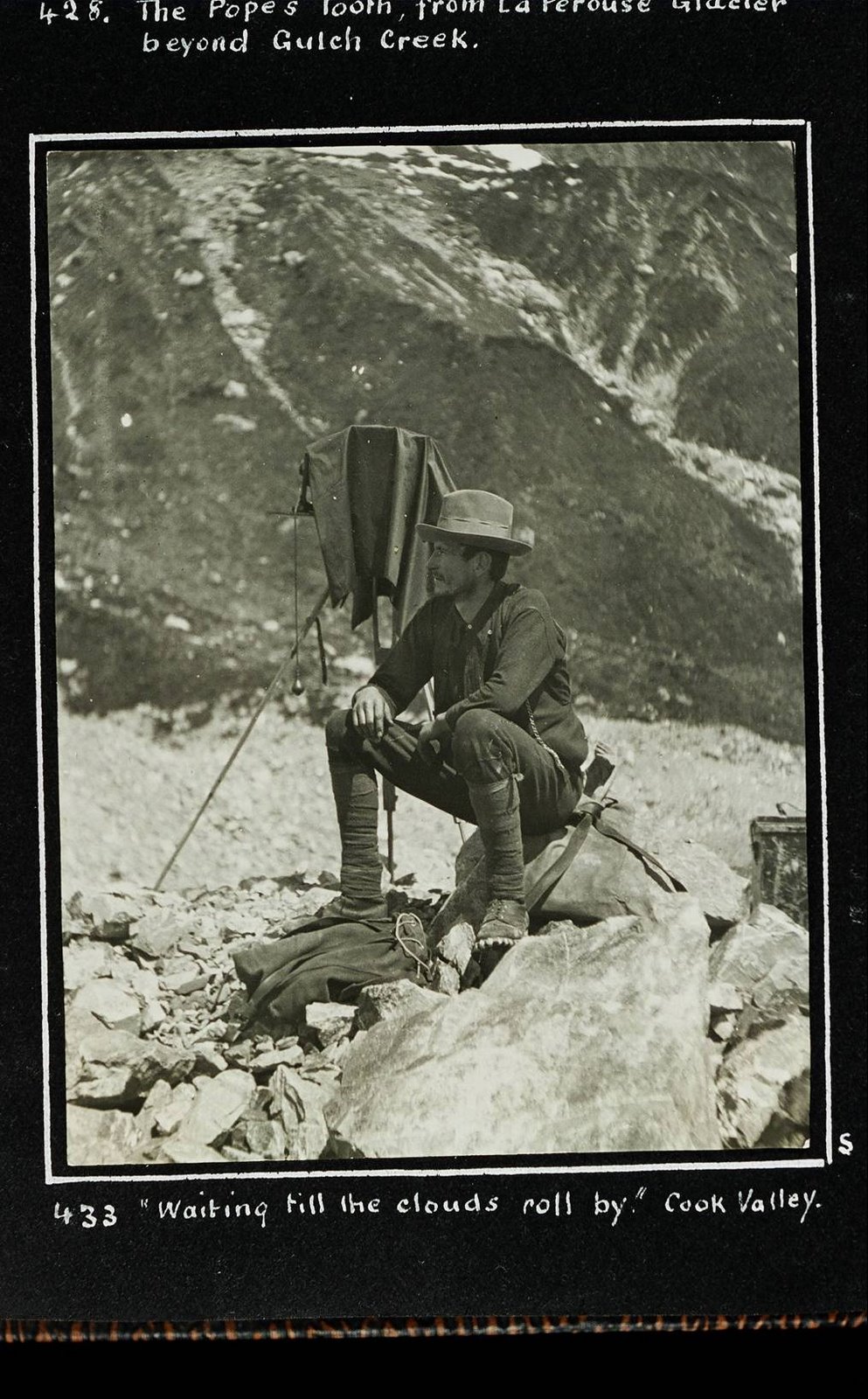 The  name Teichelmann may seem a strange one, yet is a German name, named after Ebenezer Teichelmann, born 1859 in Australis of a German Father and Scottish Mother. He was one of new Zealand's great Pioneer climbers.

For further information on Ebenezer Teichelmann