All in a week's work for Red Cross in Sri Lanka

I am frequently asked by family and friends, "what do you do in a typical week." First thing iI dispel,  is there is no such thing as a typical week as every hour, every day is different to the day before. 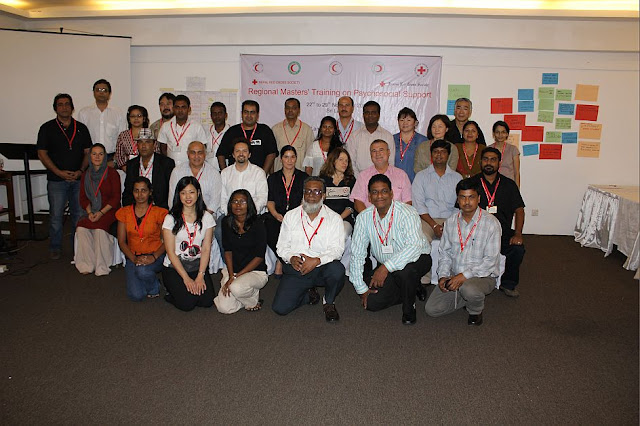 On Monday I was the guest speaker at the closing ceremony of first Red Cross regional master facilitators workshop on Psychosocial Support Services which was held at Wattala, 20 km north of Colombo. The nine-day workshop had participants from Nepal, Maldives, Bangladesh, Sri Lanka, Afghanistan, Hong Kong, Japan, Mongolia and South Korea. A team of four facilitators from the IFRC PSP Reference Centre in Copenhagen provided training to the participants. Overall the workshop was well received by everyone, and it is hoped that the participating NSs will soon start working on PSP as an integrated component of their respective core programs. It wsa a real joy to see Dr. Toshi from the Japanese RC who I worked with after 9/11 in Pakistan when Afghan refugees fled across the border to Pakistan and we worked together supporting these refugees. And my olf friend Dr Sultan who I worked with in Afghanistan during those bloody and bleak days from 1993 to 96 wehen he was a doctor running one of the 15 Red Cross clinics in Kabul.

On Monday our risk management and audit team comprising members from Geneva and KL arrived to commence an internal audit. This is a time consuming process that takes my team weeks to prepare for. In addition,  I have Sushila, a consultant who has worked for me before, in Sri Lanka documenting the Re-Engineering process which I will elaborate on later.

In the evening I attended the celebrations of the birthday of the Emporer of Japan at the residence of Ambassador and Mrs. Takahashi. The Ambassador is and outstanding diplomat, who speaks many languages including Mandirin, and is a very close friend of President Konoe, the President of the IFRC.
It was a most enjoyable evening where I met many diplomats and members of the Japanese community, and because Naila is Russian speaking, she introduced my to a number of Russian diplomats which gave me a chance to speak my poor Russian..

On Tuesday afternoon and Wednesday I was involved in a planning meeting with the Mulaitevu and Kilinochchi Sri Lanka Red Cross branches who came to Colombo to discuss how to increase programming to the hundreds of thousands of vulnerable people, badly scarred during the war. Mulaitevu and Killinochichi were the two worst affected districts in northern Sri Lanka during the 25 years plus of conflict and he devastation caused has to be seen to be believed. In many areas not a is building standing, tree truncks rotting as the tops having been blown off by years of every form of shelling, bombing mnortaring and explosion imaginable. Tragically thousads of people were killed and nearly every family lost at least one member. Ouir work for the IDPs in the north is of high importance. 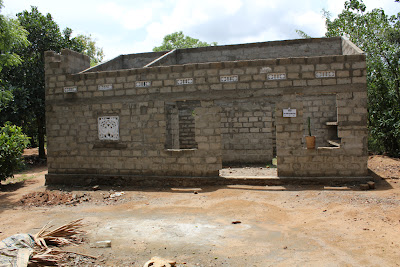 One of the thousands of houses built by the Sri Lanka Red Cross in the north after the conflict ended. Thousands of other houses were built in the north in tsunami affected areas as well for conflict victims.

Our housing programme for IDPs up north is going ahead with over 800 of the initial 2000 well underway and repairs to another 1000 more completed. We are also starting water and sanitation, livelihood and volunteer recruitment programmes. 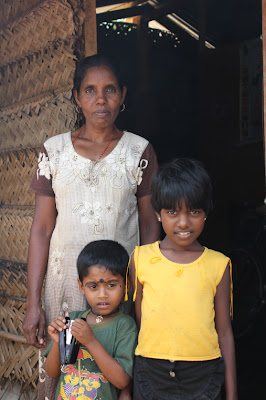 The work the Red Cross is doing in Sri Lanka is for hundreds of thousands of people like Vimala Rama, a war widow with five children who struggles to keep her family together. The Red Cross has provided her a house, a clean water supply, access to a livelihood/occupational skills training, clothes and school equipment for her children.

I keep photos of people like Vimala and her children in my diary to motivate me in my work and to remind me that every delay, causes people like her to suffer unnecessarily. Photo: Bob McKerrow


Providing livelihoods to the war-affected opeople is crucial so I read with great interest a report on a field day on Solar-Powered Irrigation Systems held in the north organized by the Ministry of Agriculture which my staff attended and visited the locations in Vavuniya North and Oddusuddan DS divisions. We are exploring the possibilities to support the conflict victims in installing these Solar-Powered Irrigation Systems under our livelihood component.

To reach Polonnarwura you turn off the A6 highway at Habarana and drive through the 8890 hectares of MINNERIYA NATIONAL PARK which consists of mixed evergreen forest and scrub areas and is home to sambar deer, leopards and elephants. 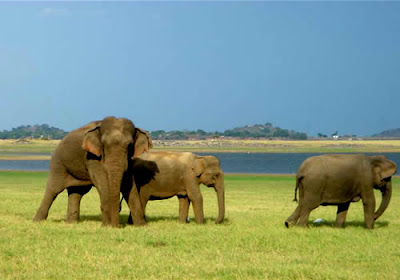 The central feature of the park is the ancient Minneriya Tank (built in 3rd century AD by King Mahasena). During the dry season (June to September), this tank is an incredible place to observe the elephants who come to bathe and graze on the grasses as well as the huge flocks of birds (cormorants and painted storks to name but a few) that come to fish in the shallow waters. 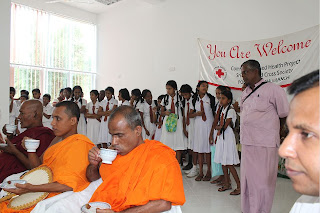 The opening ceremony of this large Red Cross building was attended by hundreds of young volunteers, and at the building blessing ceremony prayers were said by a Buddhist monk, a Hindu priest, a Muslim mullah and a Catholic priest. Photo: Bob McKerrow

President of SLRCS Jagath Abeysinghe and his Vice President  Bharatha Jonikkuhewa, opened the new building which was funded by the Canadian Red Cross. Robert Vandenberg and his son Isaac represented the Canadian Red Cross. Here we all are at the foundation stone below, from r to l, yours truly, Robert and Issac kneeling, Jagath Abeysinghe, Bharatha Jonikkuhewa, and  Gamini Nandakumara. . 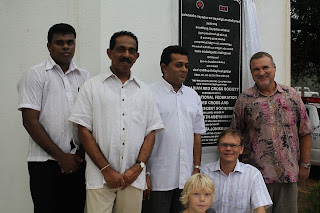 On the way back to Colombo, a seven hour trip, we experienced torrential rain and road conditions were treachorous. Due to heavy rains Puttalam, Moneragala and Kurunagala Mannar districts were flooded and landslides were experienced in Nuwara Eliya. Also reports are coming in of wide spread flooding in the east. Thousands of families are affected and the respective SLRCS branches deployed their rescure teams and conducted assessment and distributed food and non food items.

On Friday I finished my Bi Weekly report which I sent off to my line managers in KL and New Delhi.

Then I had meeings with the President and Director General of Sri Lanka Red Cross on the current re enineering process which is designed to build a stronger Sri Lanka Red Cross Society (SLRCS) and we  discussed the facilitation of the ongoing change management, together with the required capacity building, counseling, mentoring and coaching services and through the setting up of required Independent Committees to achieve governance and management excellence of SLRCS to, ensure sustainable Humanitarian Service Provision. An importasnt process. 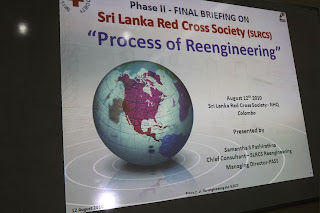 Achievement of desired results as per goals and targets
Partner and target community / beneficiary satisfaction increased
Reduced confusion, tension, overwork, etc.
Enhanced care on human resources and physical resources
Enhanced relationship with IFRC, ICRC, PNSS and other donors
I am enjoying being part of this change management process and it takes a lot of my time and energy. 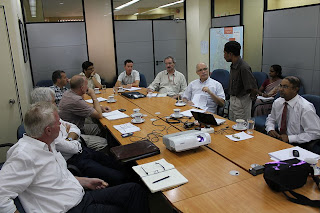 A group of Red Cross partners to the Sri Lanka Red Cross listening to a presentation on the Re Engineering process. Photo: Bob McKerrow

I also spent time yesterday studying our massive water and sanitation projects in and around Ampara which will bring clean water to hundreds of thousands of families in the Ampara district. nThis is a complex with over 15 seperate water systems and one by one they are being finished,

In between the events listed above are the 70 plus emails I get a day requiring an answer, the phone call, the visitors all take up lots of time. 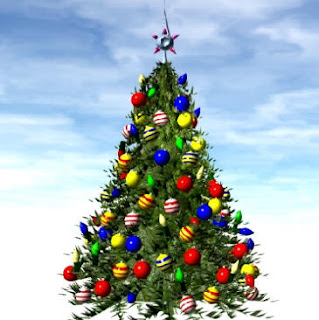 As I write this, it is Saturday morning and I have just put up the Christmas tree with my son, Mahdi. The joy in his eyes as he unpacks the lights, the decorations and puts them on the tree, was such an emotional feeling that took me back to my childhood.

An early Merry Christmas to you all.
Posted by Bob McKerrow - Wayfarer at 22:01

Great post, sir! Loved the PSP news! Merry Christmas to you too :-)

Thanks, and a very Merry Christmas to you too.

Kia ora Bob,
You continue to inspire from across the miles. I shall raise a tin cup to you by the firelight in the Ruahine very soon!
Cheers,
Robb


I'll reciprocate the toast from a coconut shell from Hikadua where I am taking the boys surfing over Christmas. Greatly enjoyed your last posting. Bob

Excuse for that I interfere … But this theme is very close to me. Is ready to help.