Let's continue to save lives in the New Year. 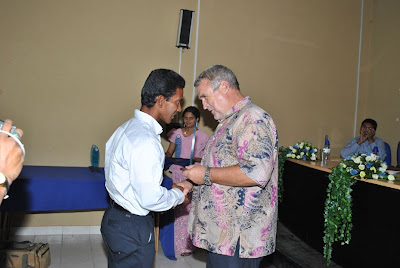 Visually it was not as impressive as Bondi Rescue or Baywatch, but a group of Red Cross volunteer life savers in Gampaha, Sri Lanka, with a record of saving 250 lives in 2010, impressed me enormously by their feats.


Chandana Priyantha (l) receiving an award for saving 15 lives in 2010.


With the year coming to an end I felt I should write something reflective about volunteers as I spend a lot of my time working with Red Cross volunteers. I stumbled across this quote the other day which inspired me

"Volunteers are the only human beings on the face of the earth who reflect this nation's compassion, unselfish caring, patience, and just plain love for one another,"

Today, 30 December, I was invited as guest of honour to present Awards of Appreciation to 50 plus Red Cross volunteer life savers, who have saved over 250 lives this year in Gampaha district in Sri Lanka.. 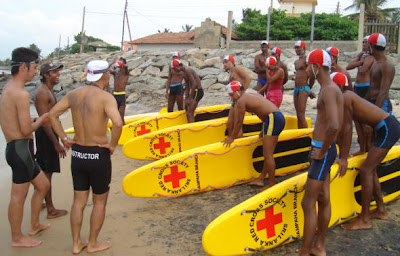 Gampaha, the second most populated district in the country with a population of just over 2 million in a land area of 1,387 sq km., has  water hazards everywhere. 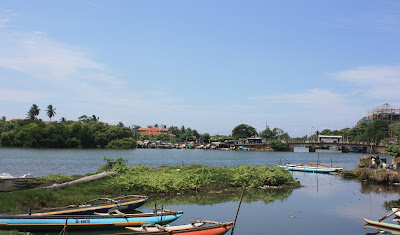 The district has many popular beaches, lagoons, rivers and ponds, and the rates of drowning incidents are very high.The lagoon on the west coast provides an area for local fishermen for their livelihood and with it comes many drownings.

The district adjoins Colombo and due to its canal systems and sluice gates in disrepair is prone to heavy flooding, so the trained life savers are used often for for flood rescue. In addition they go into fishing communities and teach water safety to the fishermen and their families. Thousands of people have received this community-based training. Also, part of the water safety programme is educating and training school children to be water proof. 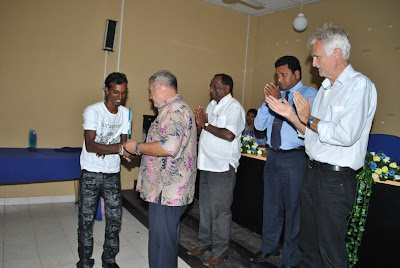 Today it was a special privilge for me to present awards to the two most outstsnding life gurads, one man who saved 16 people and the other 8 people.

Left, presenting an award to  Sudesh  Perera who saved 8 lives in 2010


Due to the high incidence of drowniings noted in 2004,  the Japanese Red Cross sponsored this programme from 2005 for 3 years bringing in expert instructors from Japan to train local instructors. Recently the German Red Cross took over funding the programme which will continue until the end of 2011. 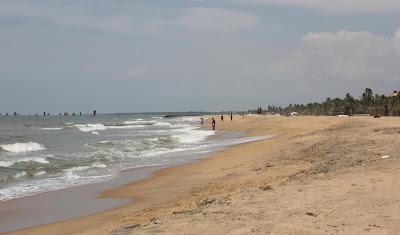 Negombo beach where many lives have been saved by Sri Lanka Red Cross life savers or life guards.. 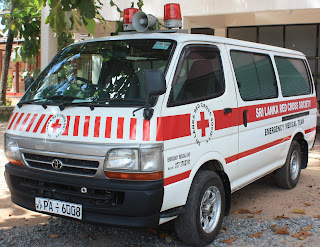 In addition to many other actvities the Red Cross ambulance is another life saving service in Gampaha district.

I was very impressed by these young and higfhly motivated life savers, so my New Year's resolution is to improve my skills in being able to save lives, initially in doing a refresher first aid course, and  improving my water safety skills. I hope you will consider the same. Any why not join your local Red Cross or Red Crescent branch ?

It's amazing for me to have a web page, which is good in support of my knowledge. thanks admin

Hey there just wanted to give you a quick heads up. The text in your article seem to be running off the screen in Ie.

I'm not sure if this is a format issue or something to do with internet browser compatibility but I figured I'd post
to let you know. The design look great though! Hope you get the issue solved soon.

Have a look at my web-site ... good research paper topic ideas

You really make it seem so easy with your presentation but I find
this topic to be actually something which I think I would never understand.
It seems too complicated and extremely broad for me. I'm looking forward for your next post, I'll try
to get the hang of it!

Here is my weblog ... business pages

I have been surfing online more than 3 hours lately, yet I
never discovered any attention-grabbing article like yours.
It's pretty worth sufficient for me. Personally, if all web owners and bloggers made good content as you probably did, the internet might be a lot more helpful than ever before.

Here is my web blog: directory of real estate resources

I'll immediately clutch your rss feed as I can't
in finding your email subscription link or e-newsletter service.
Do you've any? Kindly permit me recognize so that I may just subscribe. Thanks.

Wow, this piece of writing is good, my sister
is analyzing these things, thus I am going to tell her.

Very good post. I will be facing many of these issues as well.
.

These are actually wonderful ideas in about blogging.
You have touched some good things here. Any way keep up wrinting.

Hmm is anyone else having problems with the pictures on this
blog loading? I'm trying to determine if its a problem on my end or if it's the
blog. Any feed-back would be greatly appreciated.

Heya i'm for the primary time here. I found this board and I to find It truly helpful & it helped me out much. I hope to provide one thing back and aid others like you aided me.

This article is actually a nice one it helps new the web users, who are wishing
in favor of blogging.