According to the Disaster Management Centre (DMC) and local authorities, as of 8 December 1200hrs, a total of 05,974 persons (26,825 families) were affected by heavy rains and floods across the country, including 94,883 ersons (25,460 families) in the northern region.

Some roads are interrupted, cutting off assistance to population in the five northern districts. Government Agents re coordinating response efforts. 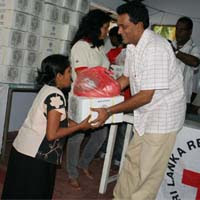 Photo left: SLRCS President Jagath Abeysinghe at a distribution point in the Homagama.

As at 8 December 2010, the sluice gates of several reservoirs were opened as in view of exceptionally high levels of water, the highest recored in the last 11 years.
As heavy rains continues to pound various parts of Sri Lanka, hundreds of volunteers from the Sri Lanka Red Cross Society(SLRCS) and its branches are actively engaged in providing various humanitarian relief for the thousands affected by the recent heavy rains and flooding.


These relief activities were focused especially around the Colombo district for the past few days. The International Federation of Red Cross and Red Crescent, and the Canadian Red Cross Society have extended generous financial support to SLRCS for the successful implementation of the relief operation.

For several days and nights, cooked food, dry rations, potable water, and non-food relief items have been distributed by SLRCS volunteers. Cooked food parcels were supplied to 1800 persons in urban areas like Red Barna and 259 Garden by volunteers from the Colombo City branch.

For those affected in the District Secretariat divisions of Kolonnawa, Mgaragama, Kebewa, Kotte, Kaduwela , 1700 food parcels, 1000 dry food parcels and drinking water bottles were distributed by the Colombo branch. In addition, water pumps and chlorine have been supplied to communities in order to clean their wells.

Meanwhile 21 mobile toilets were also supplied by the Red Cross in response to a request by the National Disaster Management Centre. Colombo Branch conducted 3mobile clinics for 750 persons in the Kotte, Kolonnawa and Homagama areas.

Red Cross volunteers are working in close cooperation with Government and NGO workers for the smooth implementation of these relief measures. The Sri Lanka Red Cross Society was able to rapidly and efficiently engage in these relief measures thanks to its timely work of Disaster mitigation advocacy programmes and having in place trained Branch Disaster Response Teams, Community Based Disaster Response teams with the requisite training.

As I write, more information is coming in from the Red Cross Branches listing the work they are doing. I will keep you posted as the situation worsens.
Posted by Bob McKerrow - Wayfarer at 01:05

We value all of our customers and care about their Custom Research Paper Help Services thus, we ensure that we use the right content in writing Affordable Custom Writing Services that will see the client score good grades.

It becomes necessary for students to identify companies that offer Cheap Term Paper Writers,to assist them in their assignments and Custom Dissertation Writing Help. The most convenient issue is that you can access the Custom Research Paper at any time and location as long as you have Internet connectivity.