With the winter snows crippling most of Europe and central Asia, I think of the little Russian house in Almaty where we lived in shortly after Naila and I were married. Often we were totally snow-bound and enjoyed a day at home by a roaring fire. Here is a poem I wrote at the time about the Eternal Flame, a memorial to Soviet soldiers who died in the second world war. During the winter, many old comrades of that bygone era would gather round the warm flame and toast to fallen comrades with a tot of Vodka. 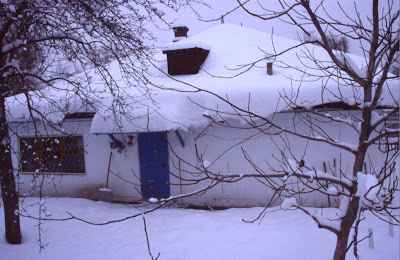 The aging keys rattle back

The pretty one married last year

Almaty’s old and its new

The brides are new then they’re old

Shiver back, wrap the sack

An aging soldier coughs and hacks

Cuddles the eternal flame for warmth

His medals lie as history taunts.

Spot on with this write-up, I really believe this website needs a great deal more attention.

I'll probably be back again to see more, thanks for the advice!